Amid a growing chorus for U.S. intervention in Syria from both voices on the Right and Left President Obama is threatening military action if Syria’s unconventional weapons come into play. But the Independent Institute’s Ivan Eland says the risks from a U.S. attack still outweigh the potential benefits.

For some time, Sen. John McCain and the Wilsonian neoconservatives have been beating the drum to escalate the U.S. intervention in Syria. Now, from the other side of the political spectrum, the Wilsonian progressives are calling for the same solution. The hawks on the left and right abhor each other on most policy issues, but in foreign policy they are both imperialist to the core.

To not appear as naive as they actually are, neoconservatives dress up their imperial “democracy promotion at gunpoint” preferences with peacock-strutting. red-white-and-blue American exceptionalism and repeated references to vague “U.S. interests” or “American vital interests.” Their leftist co-travelers mask their imperial mindset under the banner of “humanitarian protection of lives using military power.” 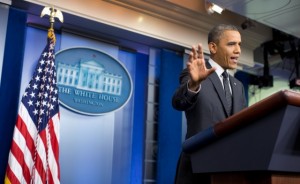 President Barack Obama, at a news conference on Monday, threatened U.S. military intervention in Syria if there were signs that the Syrian government was moving or preparing to use unconventional weapons. (White House photo by Pete Souza)

To save Syrian lives, William Perry and Madeleine Albright, secretaries of defense and state, respectively, under President Bill Clinton, advocate U.S. military intervention without putting forces on the ground. In Perry’s case, he specifically advocates establishing a no-fly zone over northern Syria as a sanctuary for Syrian rebels.

Hawkish progressives, such as former Obama administration official Anne-Marie Slaughter and columnist Nicholas Kristof, advocate providing heavier anti-tank and anti-aircraft weapons and maybe U.S. air cover to rebel commanders who pledge to avoid sectarian killings and protect civilians. Most of the progressives seem to be using the “low cost” (read: few or no American casualties) model of “overthrow from the air” that caused Muammar Gaddafi’s demise in Libya.

Underneath all the humanitarian rhetoric, the muscular left seems to believe that the Assad government’s downfall is only a matter of time and that the longer the war goes on the more it will have adverse spillover effects in the region (read: the more it will affect Israel). Also, the argument is made that if the United States doesn’t jump into the Syrian civil war with both feet, it won’t have any influence in post-Assad Syria (again, to better protect Israel).

Using the Libyan model as a success story is a bit premature, however. As the Iraq debacle showed, toppling a dictator does not a stable democracy make. In the absence of a strong dictator to hold fractious countries with severe tribal, ethnic and sectarian cleavages together, much strife and killing may result and democratic rule may be tenuous or temporary. Revolutions are often lengthy and unpredictable phenomena (note the lengthy four phases of the Russian Revolution) in which the group that initially takes power may not end up on top when all of the dust settles.

In the case of Libya, the big problem now is the potential for future violence among multiple tribal militias, armed by the West, that don’t get along. In Syria, if anything, the ethno-sectarian cleavages are even greater than in Iraq, leading many experts to believe that much chaos and bloodletting may result if Assad is thrown out of power.

Neoconservative hawks learned the wrong lesson from 9/11 and used those attacks to make the problem of Islamist terrorism worldwide worse by invading Iraq. Instead, they (and their brethren on the Wilsonian left) should have learned that aiding rebels in a civil war, the Afghan mujahedeen against the Soviet-backed Afghan government, can be very dangerous. Al-Qaeda was spawned from the mujahedeen and is clearly one faction of the Syrian insurgency now.

Pro-interventionists are confident that a U.S. intelligence community that couldn’t detect the 9/11 attacks and thought Saddam Hussein had weapons of mass destruction can properly tell the good guys from the bad guys (Islamist militants) in the Syrian resistance.

Even if U.S. intelligence had a reasonable chance of successfully doing such vetting before providing weapons, in chaotic civil wars, weapons regularly leak from the initial recipients to others, for example, U.S. military supplies in Afghanistan and Pakistan have fallen into the hands of the Taliban, and the Syrian rebels are fighting with armaments, even heavy weapons, such as tanks, captured from the Syrian military.

But isn’t it necessary to intervene to safeguard Assad’s alleged chemical weapons arsenal so that it doesn’t fall into the hands of terrorists? Unlike biological weapons, which are mainly terror weapons, chemical weapons are normally used as defensive weapons on conventional battlefields (armies on offensive operations are reluctant to “slime” territory that their own forces will likely be moving through).

Also, chemical weapons, although fearsome in reputation, have historically killed fewer people than conventional weapons. It would not be good for Islamist terrorists to get them in a post-Assad Syria, but they are not good terrorist weapons, and the threat has been overstated.

In any case, Israeli or Turkish commando teams could safeguard chemical weapons without the help of the United States. Islamist militants, Hezbollah of Lebanon or otherwise, would most likely use such weapons (probably ineffectually) against Israel. If Assad falls, Israel should use some of its $3 billion-plus in annual U.S. military assistance to secure such weapons.

More generally, what happens in faraway Syria is only a concern to the United States because of our government’s slavish support of Israel. But Israel is a rich, technologically competent nation that has 200-plus nuclear weapons and poorer, militarily feckless neighbors (including Syria).

Assad may fall, but his regime is fighting back tenaciously. Fortunately, President Obama is more in the realist foreign policy camp and also doesn’t want to do anything risky before a likely tight election. So although the U.S. has imposed economic sanctions on Syria and provided “nonlethal” aid (communications equipment, which actually is an important combat multiplier) to the rebels, Obama is resisting calls from hawks on the Left and the Right for an escalation.

But with America’s prestige now on the line after those earlier policy moves and the advocacy of Assad’s ouster, the post-election road to an ill-advised escalation may be open, no matter who wins the plebiscite.

2 comments for “Assessing the Real Risks in Syria”