In picking House Budget Chairman Paul Ryan for the vice presidential slot, Mitt Romney signaled a disinterest in filling his own gap in foreign policy experience as well as a likely avoidance of international affairs as a major topic in the presidential race, observes ex-CIA analyst Paul R. Pillar.

To the extent that choices of vice-presidential running mates make any difference at all, one effect of Mitt Romney’s selection of Paul Ryan will be for foreign policy to recede even farther into the background in the presidential election campaign.

As much commentary has already noted, with Ryan known chiefly for his austere budget plan, attention will intensify toward salient features of that plan, including proposals involving Medicare, discretionary spending and the definition of taxable income. 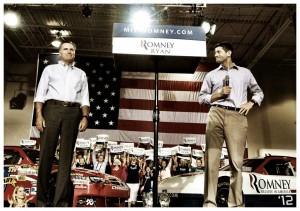 Romney evidently is happy to be associated with those proposals, and Democrats certainly will be happy to sink their teeth more deeply into them. The more overriding attention these issues get, the less attention will be left over for everything else.

Possibly Democrats will question whether a 42-year-old who has spent most of his still-young adult life on Capitol Hill and has had no other involvement with foreign relations has sufficient experience to be entrusted with the duties of the presidency if he had to assume them and to respond to those proverbial 3:00 a.m. phone calls.

This is unlikely to become a significant issue in the campaign. John McCain’s choice of Sarah Palin four years ago shifted the frame of reference for judging vice-presidential candidates along these lines. Ryan seems to be a smart and shrewd man and a quick learner, and any efforts to portray him otherwise probably would not gain traction.

Romney appears to have concluded, not surprisingly, that foreign policy does not offer him many potentially winning issues. Reactions to his foreign tour, which, fairly or unfairly, were disproportionately negative, probably firmed up that conclusion. It may be no accident that reportedly his choice of Ryan also firmed up about the time he was finishing the foreign trip.

This year’s campaign probably was never going to be one of the better ones anyway for useful foreign-policy debate. Where President Obama should be most subject to challenge, on matters ranging from the war in Afghanistan to pressure on Iran to the kinetic approach to counterterrorism, meaningful challenges would have to come from a direction other than the Republicans.

Romney’s pronouncements on foreign policy have consisted in large part of statements that are delivered forcefully as if they were criticisms but substantively resemble restatements of current policy. The press and the commentariat are left to try to discern whatever pieces of daylight they can between the two presidential candidates.

Expectations of how Romney would handle a situation differently from Obama are more a matter of conjecture and inference, and of applying Kremlinology-type analysis to Romney’s roster of advisers, than of any openly stated positions.

Maybe a second-term Barack Obama would do some significant things differently in foreign affairs than a first-term Barack Obama, or a first-term Mitt Romney. As Obama remarked earlier this year to Dmitri Medvedev, this will be his last election, and afterward he will have “more flexibility.” But this, too, is a matter of conjecture and inference and not of anything the president has felt it politically safe to say now.

Foreign policy has generally, of course, played less of a role in presidential campaigns than domestic and especially economic issues. The partial exceptions have come mostly amid major and costly wars such as those in Korea, Vietnam and Iraq.

In the remaining 12 weeks of this year’s campaign there is still the possibility of some jolting event overseas that will force itself into the campaign. If so, the Oct. 22 presidential candidates’ debate that is reserved for foreign-policy issues could become interesting.

But most likely this encounter, which will be the last of the candidates’ debates and comes just 15 days before the election, will determine few votes and not be remembered as a major event.

All of this is too bad, because there is no shortage of important foreign-policy issues that could use much more vigorous public debate than they have received. These include questions, such as Afghanistan and the U.S. military posture in the eastern Pacific, that are related to the overall role of the United States in the world.

They also include matters, such as counterterrorist strategy and the economic war being waged against Iran, that involve assumptions that ought to be far more energetically questioned than they have been.

← Romney-Ryan Bet on ‘Greedy Geezers’
The Impulse to Intervene →