Exclusive: Mitt Romney and Paul Ryan were quick to assure U.S. seniors that they will be grandfathered in to today’s Medicare  even if younger Americans get stuck with an inferior system a bet that the selfishness of “greedy geezers” will grease the way to a Republican victory, writes Robert Parry.

The newly minted Republican ticket of Mitt Romney and Paul Ryan is placing a big and some might say cynical bet that the stereotype of the “greedy geezer” is real, that Americans now eligible for Medicare or close to it don’t care that the popular health program won’t be there for their children and grandchildren.

In picking Rep. Ryan as his vice presidential running mate, Romney has taken on Ryan’s plan for replacing Medicare for senior citizens with a voucher program that will end the current fee-for-service program and shift more of the financial burden for health care onto Americans after they turn 65. 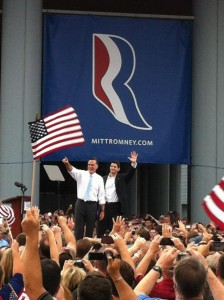 However, as Romney and Ryan quickly explained in a TV interview, the Ryan plan wouldn’t affect people currently on Medicare. In its current form, Ryan’s plan for turning Medicare into a voucher system (or “premium support” as Ryan calls it) wouldn’t begin until 2022.

Since senior citizens vote in higher percentages than other demographic groups, Romney and Ryan are trying to split the current Medicare recipients away from those Americans in later generations. The reasoning goes: If today’s seniors think that they’ll still get theirs, they won’t care that their kids and grandkids might be stuck with an inferior program costing each one more than $6,000 extra.

Last year, when Ryan’s was pushing his Medicare overhaul, he and other advocates specifically stressed to seniors at town hall meetings that they would continue to get the system’s guaranteed benefits, an explanation that drew applause from some voters in that age group but prompted concerns from others.

For instance, in Elkhorn, Wisconsin, 64-year-old Clarence Cammers hesitantly asked Ryan a question that got to the heart of the matter. After describing himself as a disabled veteran living on Social Security, Cammers said he could stand some cutbacks for himself; that wasn’t his concern.

“I will be fine,” Cammers said. “I guess what I’m saying is, what are all these changes going to mean for my son?”

Cammers was noting the hard truth that it would be younger Americans who would face Ryan’s scheme of replacing Medicare with government vouchers that would fall short of covering the costs of private insurance.

Though Ryan inserted some pleasant language promising that the sick will get adequate care, the reality is sure to be different, essentially requiring the elderly many who will have preexisting conditions to navigate through a complex system of insurance companies offering varying levels of coverage. Plus, many insurance companies don’t want anything to do with old and sick people.

As the Brookings Institute’s Henry Aaron explained to the Washington Post’s Ezra Klein, “We’ve all heard about the great proportion of health services used by people in the last year of life. That means if you’re an insurer, you want desperately to not enroll those people.  That means you need to try every marketing device you can not to get stuck with the sickies.”

Indeed, the projected budget savings from Ryan’s “premium support” system would be derived from the shortfalls between the vouchers and the cost of medical care for seniors. In other words, the money would be taken out of the pockets of the elderly or be saved by them skipping treatments that they otherwise would receive.

Even for current and near-term Medicare beneficiaries, the Republican plan would have that effect for people needing lots of prescription drugs. The Ryan plan would repeal the current subsidy for seniors facing the “doughnut hole” gap in drug benefits.

But the hardest impact of the Ryan plan would hit those turning 65 in 2022 and later. Though Ryan’s sketchy 2011 proposal lacked many of the specifics needed to fully evaluate its effects, a New York Times editorial noted, “there is little doubt that the Republican proposal would sharply reduce federal spending on Medicare by capping what the government would pay at very low levels.

“The Congressional Budget Office estimates that by 2022 new enrollees would have to pay at least $6,400 more out of pocket to buy coverage comparable to traditional Medicare. Huge numbers of Medicare beneficiaries live on modest incomes and are already struggling to pay medical bills that Medicare does not fully cover. We should not force them into private health plans that would charge them a lot more or provide much skimpier benefits.”

In the years beyond 2022 — under Ryan’s original plan — the gap between Ryan’s voucher and the actual cost of medical care would widen even more because he would attach it to a slower measure of inflation than the rise in medical costs.

“We’re looking at linking to an index that grows less rapidly than health-care costs by three to four percentage points a year,” said Aaron of the Brookings Institute. “Piled up over 10 years, and that’s a huge erosion of coverage.”

Ryan’s plan also would repeal the Affordable Care Act, known as “Obamacare,” meaning that tens of millions of non-seniors would be on their own to grapple with large insurance companies that aggressively seek to weed out customers with preexisting conditions that might require expensive care.

In December 2011, Ryan did embrace a compromise Medicare plan with Sen. Ron Wyden, D-Oregon, that would index government support levels to the average rise in insurance costs and would let seniors sign up for what essentially amounts to a “public option,” i.e. a government-run program.

However, assuming Romney and Ryan win in November — and bring in a Republican House and Senate — it’s not clear which plan the Republicans would push, since they might no longer need significant Democratic help. They might go back to Ryan’s initial plan which was approved by the House Republican majority.

The obvious result of Ryan’s original Medicare plan would be that many Americans who are now under 55 would die prematurely because they would have to skip treatments or be forced deeper into poverty as they struggled to meet the premium demands of the insurance industry.

Which gets us back to Clarence Cammers’s question: “what are all these changes going to mean for my son?”

The Republican assumption about the “greedy geezers” is that they don’t share Cammers’s concern; all they care about is their own welfare; they want to live as long and as healthy a life as possible but don’t feel the same for their kids and grandkids.

But the GOP bet on the “greedy geezers” is even more startling in that Romney and Ryan are gambling that these seniors and near-seniors would prefer lowering the top tax rates even more for millionaires and billionaires than seeing their progeny enjoy a full and fulfilling life.

Because of Romney-Ryan new tax cuts (and President George W. Bush’s old tax breaks), Ryan’s budget plan doesn’t foresee a balanced budget for nearly three decades and only then if his original Medicare overhaul plan is enacted and medical costs are shifted heavily onto the backs of the next generations.

Romney and Ryan are further betting that Americans are ready to embrace a brave new world of unbridled selfishness as envisioned by Ryan’s idol, novelist Ayn Rand, who dreamed of a place where “supermen” of industry would be unchained from a society demanding that they share the bounty of their success with others.

In her influential writings, Rand ranted against social programs that enabled the “parasites” among the middle-class and the poor to sap the strength from the admirable rich. But she secretly accepted the government benefits of Medicare after she was diagnosed with lung cancer.

A two-pack-a-day smoker, Rand had denied the medical science about the dangers of cigarettes, much as her acolytes today reject the science of global warming. However, when she developed lung cancer, she connived to have Evva Pryor, an employee of Rand’s law firm, arrange Social Security and Medicare benefits for Ann O’Connor, Ayn Rand with an altered spelling of her first name and her husband’s last name.

In 100 Voices: An Oral History of Ayn Rand, Scott McConnell, founder of the Ayn Rand Institute’s media department, quoted Pryor as saying: “Doctors cost a lot more money than books earn and she could be totally wiped out.”

So, when push came to shove, even Ayn Rand wasn’t above getting help from the despised government. But her followers, including Paul Ryan, now want to strip those guaranteed benefits from other Americans of more modest means than Ayn Rand.

These Republican priorities hit home at a town hall meeting held by Rep. Rob Woodall, R-Georgia, in May 2011 when one of his constituents worried that Ryan’s plan would leave Americans like her, whose employer doesn’t extend health benefits to retirees, out of luck.

However, another constituent noted that Woodall accepted government-paid-for health insurance for himself. “You are not obligated to take that if you don’t want to,” the woman said. “Why aren’t you going out on the free market in the state where you’re a resident and buy your own health care? Be an example.

The Romney-Ryan ticket has shoved its chips into the middle of the table with a gamble that Americans so despise the federal government and the country’s first African-American president that they will ignore such hypocrisies as demonstrated by Ayn Rand and Rep. Woodall.

And for those already on or soon to be on Medicare, the Republican bet is that these seniors and near-seniors will be the greediest of geezers, enjoying the health program for themselves but willing to take the risk that their children and grandchildren will be left at the mercies of private insurance giants.

The Romney-Ryan calculation suggests the Republicans really do believe that today’s senior citizens represent the most selfish generation in American history.