The invasions of Afghanistan and Iraq followed by failed nation-building may have taught the U.S. government a few lessons in humility, but the temptation to intervene in crises around the world remains strong, with recent examples in Syria and South Sudan, notes the Independent Institute’s Ivan Eland.

Despite its massive annual federal budget deficits and national debt, the American superpower continues to meddle in faraway countries that pose little direct threat to U.S. national security. Examples of those nanny-like interventions have recently occurred in Syria and South Sudan.

The U.S. Pentagon and State Department, having learned the wrong lessons from post-American-invasion Iraq, are now planning for a post-Assad Syria. Undeterred by that previous mess, U.S. planners are busily concocting grandiose plans to remodel Syria’s society, security, economy, and political system, despite the objection of the Syrian opposition to foreign “transition plans.” 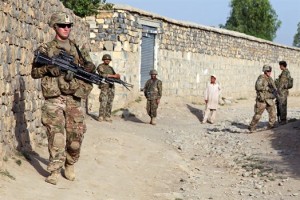 According to The New York Times, Rafif Jouejati, a spokesman for a network of Syrian activists, said, “What we don’t want to do is descend into the total chaos that Iraq did. I don’t think we want the United States to impose lessons learned here.”

But those alleged lessons from Iraq are exactly what U.S. officials are trying to implore the Syrian rebels to learn. The officials are cautioning the Syrian opposition in the post-Assad era to avoid dismantling the military, police, and government agencies, in order to avoid the security vacuum and interruption of government services that caused the chronic rebellion in Iraq.

Such management by exhortation might have to do for U.S. planners, given the fact that this time they’ll have a plan but may not have an occupation force on the ground to enforce it (providing President Obama’s pledge of overt military nonintervention holds up).

Some hawks are loudly criticizing Obama for not giving the Syrian opposition enough resources to carry out U.S. planning (making the herculean assumption that the Syrian opposition would not just take the resources while resisting implementation of a foreign plan). Of course, the real lesson from Iraq is the difficulty of imperially remodeling foreign societies to American liking and the futility and costliness of even trying.

Worse, even if the United States had a postwar plan and the resources to implement it, the entire enterprise might be counterproductive. If current U.S. policy toward Syria is any indication, that will be the case. Most U.S. officials have dire predictions of post-Assad chaos fueled by greater ethnic, sectarian, and tribal tensions than in Iraq.

Yet increasing U.S. and foreign overt and covert assistance to the rebels has encouraged them to try to unify and overthrow Assad rather than seek some sort of compromise or power-sharing with him. Sometimes, the U.S. government can be its own worst enemy.

In Africa’s South Sudan, which recently gained its independence from Sudan after a brutal civil war that killed millions, Secretary of State Hillary Clinton publicly twisted the arm of the country’s president to reach a deal to pay greater sums to Sudan for transporting via pipeline the oil South Sudan pumps out of the ground. South Sudan had cut off oil production, thus further impoverishing both countries and threatening to reignite war between them, to get Sudan to lower its oil pipeline transit fees.

The two sides were far apart in negotiations until the day after Clinton appeared in South Sudan, browbeat the South Sudanese president to reach a deal, and said, “We need to get those resources flowing again.” The next day, miraculously, South Sudan raised substantially the amount it was willing to pay Sudan, and an agreement between the two countries was reached.

Despite the oil (only a small portion of the world’s market), the United States has no real national security interest in either of these nations; but Clinton interceded in their oil dispute because the United States had previously intervened, during the George W. Bush administration, to end the civil war and broker South Sudan’s independence.

The U.S. thinking seemed to be that the original outcome had to be preserved or U.S. prestige would suffer. Yet, the next time that the two feuding countries have a dustup, likely over territorial disputes on their common border, the United States again probably will feel the need to intervene because even more U.S. prestige will be on the line.

Thus, one American intervention begets another. To avoid getting enmeshed in quagmires, one step at a time, in areas in the world not strategic to U.S. security, the United States should rely more on regional powers and organizations, such as the Arab League and the African Union, to ensure peace and stability.

2 comments for “The Impulse to Intervene”