Official Washington, including the U.S. press corps, depicts the Syrian crisis as a civil war between black hats and white hats with no room for talks with dictator Bashar al-Assad and certainly no role for Iranian negotiators, but Flynt and Hillary Mann Leverett at RaceForIran.com see that position as shortsighted.

This past week, Iran hosted an international conference on the conflict in Syria, a conference that is more important than most Western media coverage conveyed.

The conflict in Syria is not just a civil war; it has become a highly militarized proxy war, involving major regional and international powers (including the United States). In such a situation, establishing a political process involving not only the full range of relevant internal actors but also all relevant regional and international players is critical to forestalling strategic and humanitarian catastrophe. 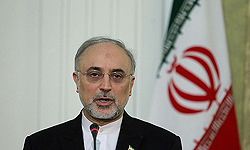 Against this backdrop, Hillary Mann Leverett appeared on Al Jazeera to talk about the prospects for resolving Syria’s internal conflict through diplomacy. [Click here.]

Hillary compared the current situation in Syria to previous civil wars in Lebanon and Afghanistan, places where, after the external militarization of local conflicts had fueled years and years of fighting, with “dire” consequences for civilian populations, domestic factions and their external backers finally found their way to a political settlement based on negotiated power sharing.

She argued that the 1989 Ta’if Accord, that ended Lebanon’s civil war after 15 years of bloody violence still stands as a model for this approach to conflict resolution. (It is noteworthy, in this regard, that one of the main architects of the Ta’if Accord, former Algerian foreign minister Lakdar Brahimi, is reportedly a leading candidate to succeed Kofi Annan as the UN Secretary-General’s special envoy for Syria.)

Turning to Iran’s role, Hillary held that, notwithstanding the criticism heaped on the Islamic Republic by the United States and some neighboring countries, Tehran deserves “respect” for its efforts to promote a political settlement in Syria.

The logic behind those efforts was well presented in an op-ed.by the Islamic Republic’s foreign minister, Ali Akbar Salehi, published in the Washington Post earlier in the week in advance of the Tehran conference.

Dr. Salehi points out that “civil war in the Levant is not a thing of the distant past. With Syria descending into worsening violence, the 15-year Lebanese civil war should provide frightening lessons of what happens when the fabric of a society unravels.”

In this context, he highlights some of (the many) illogical aspects of the Western position toward Syria: “Little, if anything, is said about the increasing presence of armed extremists in Syria. Even while preoccupied with the rising extremism in Afghanistan, thousands of miles away, European leaders seem unconcerned that they may soon have an Afghanistan on their doorstep.”

American leaders do not seem to us to be much more concerned than their European counterparts about this prospect. Indeed, U.S. support for the Syrian opposition, coordinated with Turkey, Saudi Arabia and Qatar, is raising the chances for its realization.

During the 1990s, Iran regularly warned other states, including the United States, about the rise of the Saudi-backed Taliban and the dangers posed by Al-Qa’ida’s relocation to Afghanistan under the Taliban’s hospitality. If Washington and other capitals had taken Iranian assessments seriously, it might have been possible to avert the 9/11 attacks.

Instead, Tehran’s warnings fell largely on deaf ears. Given the course of subsequent events, Iranian warnings about what could come to pass in Syria should be taken more seriously than most Western governments seem inclined to do, at least at the moment.

Noting that “abrupt political change without a roadmap for managed political transition will lead only to a precarious situation that would destabilize one of the world’s most sensitive regions,” Salehi also warns that “some world powers and certain states in the region need to stop using Syria as a battleground for settling scores or jostling for influence. The only way out of the stalemate is to offer Syrians a chance to find a way out themselves.”

To do this, Salehi argues that three things are essential: first, “ensure an immediate cease-fire to stop the bloodshed”; second, “dispatch humanitarian aid to the Syrian people”; and, third, “prepare the ground for dialogue to solve the crisis.” In this vein, he endorses Kofi Annan’s outgoing observation that “a political agenda that is neither inclusive nor comprehensive willfail.”

On a practical level, he conveys Iran’s “willingness to facilitate talks between the Syrian government and the opposition” as well as its “support for political reform in Syria that will allow the Syrian people to decide their destiny. This includes ensuring that they have the right to participate in the upcoming free and fair presidential election under international supervision.”

The final statement produced at the Iranian-sponsored conference on Syria reflects both Salehi’s analysis and his practical approach. It underscores “the necessity of pursuing political solutions based on national dialogue as the only way to resolve the Syrian crisis with the main objective of bringing the violence to a total end and encouraging the two sides to prepare the ground for the national dialogue.”

To these ends, the statement calls on “the conflicting parties to end clashes and violence for three months on the occasion of the arrival of Eid al-Fitr” (which will come on the evening of Aug. 18). Furthermore, it stresses the “need to uphold the principles of international law regarding non-intervention in domestic affairs of other countries and the respect of their national sovereignty and territorial integrity.”

In contrast to statements from the various Western-dominated “Friends of Syria” meetings, the Tehran statement also urges a cessation of hostilities “by putting an end to any military assistance to armed groups” while “warning of the dangerous impacts of support for armed groups on regional peace and security.”

Furthermore, it recognizes the importance of “establishing a contact group from among the participating countries aiming to end the violence and starting the inclusive dialogue between the Syrian government and the opposition.”

This all sounds great, right? Who could possibly be opposed to such eminently logical ideas and proposals? Well, the Obama administration is opposed to them. The administration has steadfastly resisted any contact group on Syria that would include the Islamic Republic and, as noted, is intensifying its material support for one side in Syria’s civil war.

Of course, Washington professes support for a political process to resolve the conflict, but only one in which Washington’s preferred outcome, President Bashar al-Assad’s ouster, is stipulated at the outset. That is hardly the posture of a major power seriously committed to diplomacy.

The Islamic Republic could, indeed, play a constructive, not to say indispensable role in standing up a real political process and finding a meaningful political settlement in Syria. As Dr. Salehi writes, “Iran is part of the solution, not the problem. As the world has witnessed during the past decade, we have acted as a stabilizing force in Iraq and Afghanistan, two other Muslim countries thrown into turmoil.”

Hillary recounts in her Al Jazeera appearance that she was “personally part of the U.S. negotiations with Iran over Afghanistan,” which were “critically important” in bringing Tehran “into the problem of Afghanistan in a constructive way that allowed us to move forward” and make real progress (at least initially).

Notwithstanding these historical and contemporary realities, the United States, even under the Obama administration, continues to disparage Iran’s “destabilizing” role in Iraq and Afghanistan, to which it has now added criticism of Iran’s role in Syria.

The hard truth, though, is that Iraq and Afghanistan were “thrown into turmoil” (to use Dr. Salehi’s phrase) not by Iran but by U.S. policies, including invasions and prolonged occupations that managed to combine strategic incompetence with cruelty to civilian populations. The overwhelming majority of Iraqis and a majority of Afghans see the Iranian role in their countries as vastly more positive than that of the United States.

Although the George W. Bush administration initially accepted the imperative of working with Iran in Afghanistan after 9/11, Vice President Dick Cheney, Defense Secretary Donald Rumsfeld and other hardliners were able to undermine that and to thwart any move to cooperate with Tehran on post-conflict stabilization in Iraq.

The consequences were deeply damaging for American policy in both the Afghan and Iraqi theaters. Of course, the United States eventually had to face the reality of Iranian influence in both places, but only after it had largely blown the possibility of leveraging this influence in ways that could have served American interests.

Today, Iranian involvement is critical to the search for a political solution in Syria. But, like the Bush administration before it, the Obama administration does not want such a solution, certainly not if this entails cooperating with Tehran, because that would require it to abandon its real goals in Syria: getting rid of the Assad government and thereby recasting the Middle East’s balance of power in ways that, in Washington’s fantastical view of these things, would undermine the Islamic Republic’s regional position and perhaps even reignite the Green movement.

(We are not making this up; Obama administration officials have been feeding it to the New York Times’ David Sanger at least since April 2011.)

Driven by these ambitions, the administration has, as Hillary put it, dealt with Iran “precisely in the opposite way” from how Washington dealt with Tehran in the immediate aftermath of 9/11. Rather than engaging the Iranians constructively, the United States has “tried to isolate them and make them the problem. This is a fatal flaw in the U.S. strategy, and will lead to a further decline in U.S. influence in the region and a further uptick in Iran’s influence.”

In the process, a lot more Syrians will die than would otherwise have had to, just as many of the civilian deaths that occurred during the U.S. occupation of Iraq could have been avoided if the United States had cooperated with the Islamic Republic, and the risks to regional stability from the prospective creation of an Afghanistan-like state in the heart of the Levant will continue to grow.

That doesn’t matter in Official Washington, however; as Hillary encapsulates it, “Syria is very much the piece on the chessboard here for the United States.” Iran is the most important regional actor “willing to push back against what the United States wants to do. So the United States is trying to contain that resistance, to contain that opposition. And the Obama administration thought it had a window of opportunity to do so when this revolt happened in Syria in March 2011.”

The window turned out to be illusory and the administration’s effort to exploit it has “failed.” As a result, “the United States has tried to increasingly militarize this conflict” in “a desperate attempt to contain Iranian influence.”

Hillary concludes with a broader and very important point about the strategic challenge facing the United States in the Middle East today:

“In the information age the issue is not who has the most guns, who can use the most force. It’s who has the best narrative. The United States is not going to carry the day here with the narrative of trying to arm the opposition to try to win the story here.

Flynt Leverett served as a Middle East expert on George W. Bush’s National Security Council staff until the Iraq War and worked previously at the State Department and at the Central Intelligence Agency. Hillary Mann Leverett was the NSC expert on Iran and from 2001 to 2003  was one of only a few U.S. diplomats authorized to negotiate with the Iranians over Afghanistan, al-Qaeda and Iraq. [This article was originally published at RaceforIran.com. For direct link, click here: http://www.raceforiran.com/iran-deserves-%e2%80%9crespect%e2%80%9d-for-its-efforts-to-foster-a-political-settlement-in-syria

2 comments for “Can Iran Help on Syrian Crisis?”