Exclusive: The U.S. press corps is lathered up over the “tone” of Campaign 2012, insisting on a more high-minded discourse. But these journalists are unwilling to make distinctions between legitimate questions about the presidential candidates and distortions in some of the ads, Robert Parry writes.

The hacks in the campaign press corps love nothing more than to frame their stories about bad behavior by politicians with a world-weary “both sides do it” sneer even if both sides don’t do it or at least don’t do it in anything like equal proportions. Still, the smart career play for such “journalists” is to find equivalence even if there is none.

The latest example is an article by Michael D. Shear for the New York Times on Friday in which he describes “The 2012 Cycle: Attack, Feign Outrage, Repeat.” The article posits that both the Obama and Romney campaigns have taken quotes out of context or made false accusations against the other and then “feign” hypocritical outrage when it’s done to them. 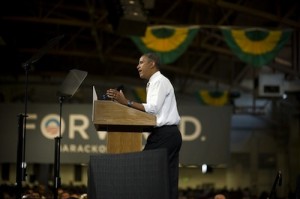 But the examples that Shear cites are more apples and oranges than rotten apples vs. rotten apples. He mixes in cases in which President Barack Obama and Republican Mitt Romney made actual gaffes, which were legitimately pounced on by the opposing campaigns, with quotes that were presented in a consciously misleading fashion.

For instance, Obama’s comment that the “private sector is doing fine” was a legitimate gaffe, as were Romney’s lines that “I like to fire people” and “I’m not concerned about the very poor,” along with his comment decrying more government spending to hire teachers and firefighters.

These gaffes reflected real tendencies of the candidates. Obama was putting some shine on the weak economic recovery and Romney was demonstrating his callousness toward common people. Yes, the quotes had broader context, but the gaffes were legitimate targets in a campaign.

But Shear equates them with other cases in which Romney’s campaign mendaciously exploited Obama’s words to mislead voters. Shear then makes fun of the Democratic protests against these willful lies.

“Democrats howled last year when Mr. Romney’s campaign produced an ad showing Mr. Obama saying: ‘If we keep talking about the economy, we’re going to lose.’ It turns out, the clip was from 2008, and Mr. Obama was quoting an aide to Mr. McCain.”

Shear then cites “Mr. Romney’s turn to cry foul a few months later when Democrats gleefully jumped on Mr. Romney’s saying ‘I like to fire people’ and ‘I’m not concerned about the very poor.’ They left out the context, he complained, though Democrats paid him no heed.

“However much they [the Republicans] talked about the importance of context, Mr. Romney’s campaign left most of it out in a barrage of ads showing the president saying: ‘If you’ve got a business, you didn’t build that. Somebody else made that happen.’ He was talking about roads and bridges, a point that was ignored.”

So, Shear’s tone is one of patronizing disapproval of both sides. But there are real differences in these cases.

Editing Obama’s 2008 quote of what the McCain campaign was saying and making it appear to be Obama talking about himself was a lie meant to deceive voters. So, was the selective editing around Obama’s “you didn’t build that” line, a conscious distortion that became a centerpiece of Romney’s campaign, complete with T-shirts and signage.

To liken those examples to the Obama campaign citing Romney’s remarks about firing people or not caring about the very poor or to Romney’s pouncing on Obama’s “private sector is doing fine” comment is simply bad journalism. There is a difference between exploiting an opponent’s misstatements and lying.

Similarly, Shear lumps into his condemnations disputes over legitimate questions, such as whether Romney bears any responsibility for the actions of his Bain Capital firm after he went to work at the Winter Olympics in 1999.

For the next three years, Bain Capital filed dozens of filings with the Securities and Exchange Commission some signed by Romney himself saying that Romney was still in charge, though Romney now insists that he wasn’t.

Rather than demand that Romney and Bain Capital release internal records clarifying what Romney’s role actually was, the major “independent fact-checkers” have simply sided with Romney’s current claims about having “retired retroactively,” thus blunting demands that he lift his cover-up and release the relevant facts.

But that means whenever Obama’s side cites the negative consequences of Bain’s venture-capital strategies, including shipping U.S. jobs overseas and shuttering American factories, most of the campaign press corps cries foul even before the Romney campaign does.

Shear joined that outrage by citing a new ad from a Democratic super PAC that, according to Shear, “essentially accused Mr. Romney of causing the death of a woman whose husband lost his job at a company owned by Mr. Romney’s Bain Capital.”

The ad by Priorities USA Action, a pro-Obama super PAC, tells the story of Joe Soptic, a former employee at GST Steel in Kansas City, Kansas, a factory closed by Bain Capital in 2001. Soptic tells the story of his life after that decision, including how he struggled to earn a living and how his loss of health benefits may have contributed to the delay in detecting his wife’s cancer until it was too late to save her life.

The U.S. press corps is now almost universally up in arms over this ad, but it actually is a valid exposition of what happens to real people when distant financial wizards make cost-benefit calculations with little or no regard for the human consequences except to make sure tht the guys in the boardroom extract their profits first.

The ad was a chance for one common man, Soptic, to express his belief that Romney doesn’t care about the little guy. Soptic’s story put into context what the impact of macro-economic decisions can be at the street level.

The ad also prompted Romney’s spokesperson Andrea Saul to defend her boss by noting that if Soptic had lived in Massachusetts, he would have still had health insurance under the near universal coverage that Romney implemented as governor.

Saul’s comment, in turn, provoked outrage from the Right, which was reminded how “Romneycare” with its mandate on individuals to buy insurance became the model for “Obamacare.”

Whether the fastidious U.S. press corps likes it or not, this is how real issues often are forced into a campaign, whereas many journalists seem to prefer obsessing over the “horse race” and trivial questions about personality. Indeed, one could argue that the Obama ads have helped fill a void created by the failure of the press corps to dig deeply into Romney’s background.

Similarly, Shear objects to an article in the HuffingtonPost noting that Bain Capital obtained some of it “initial outside financing from a group of Central American oligarchs. The article alleges that some of the investors may have also been financing death squads in El Salvador.” Shear protested that “on Wednesday, Democrats eagerly spread” the article around by e-mail.

But isn’t that a relevant point that deserves fuller explanation? Just because it may look bad for Romney to turn to right-wing oligarchs from El Salvador in 1984, when he was desperately seeking financing for his new venture-capital firm and some of the oligarchs were funding a bloody “dirty war” against peasants, students and clergy doesn’t mean that the American voters should be shielded from the evidence.

By the way, a similar article was done by the Los Angeles Times earlier this summer. Is Shear suggesting that journalists shouldn’t pursue such issues or only that political campaigns shouldn’t forward these articles to people who might be interested?

When the American people are being asked to entrust the immense powers of the United States presidency into the hands of one person including handing over the nuclear codes that could end all life on Earth shouldn’t they be given as much information as possible about the candidate?

But the more endemic problem with Shear’s article and the similar disapproving tone taken by many other mainstream journalists is their refusal to apply critical thinking to disparate cases of campaign behavior.

The truth is that in most campaigns, one candidate is more mendacious than the other. Sometimes, one side tries to be tough but fair while the other simply throws mud. When journalists like Shear fail to make those distinctions, they actually encourage more mud-slinging the very behavior that they purport to condemn.

After all, if each politician is blamed equally for unequal behavior, then the politician who behaves the worst enjoys a relative advantage. He or she can take the cheapest shots and only share 50-50 in the blame.

As hard as it is for mainstream journalists to apply evenhanded standards knowing that, say, to finger Romney as especially mendacious will draw accusations of favoring Obama that is what a professional should do, if that is the reality.

The safe career approach may be simply to declare a plague on both their houses, but that is usually the sign of a journalistic hack.