Exclusive: Mitt Romney tries to impress the Tea Partiers with his love of the Founders, but the ex-Massachusetts governor writes that the Revolution began in April 1775 with the British capturing Boston by sea, rather than the Minutemen driving the Redcoats back to Boston from Lexington and Concord, says Robert Parry.

You’d think that Republican presidential hopefuls who claim to idolize the American Founders would at least have a rudimentary knowledge about the historic events that led to the Revolution, especially one hopeful who served as governor of Massachusetts.

Yet, Mitt Romney, who presided as Massachusetts governor for four years in the capital city of Boston, wrote in his book, No Apology: The Case for American Greatness,that the Revolutionary War began in April 1775 when the British attacked Boston by sea. 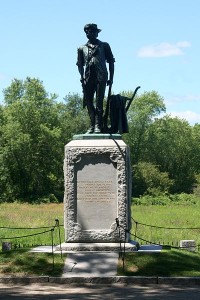 However, in the actual history, the British military controlled Boston long before April 1775, garrisoning Redcoats in the rebellious city since 1768. The British clamped down more tightly after the Boston Tea Party on Dec. 16, 1773, imposing the so-called “Intolerable Acts” in 1774, reinforcing the Boston garrison and stopping commerce into Boston Harbor.

The aggressive British actions forced dissident leaders Sam Adams and John Hancock to flee the city and take refuge in Lexington, as colonial militias built up their stocks of arms and ammunition in nearby Concord.

The Revolutionary War began not with British forces seizing Boston in April 1775 as Romney wrote, but when the Redcoats ventured forth from Boston on April 19, 1775, to seize Adams and Hancock in Lexington and then go farther inland to destroy the colonial arms cache in Concord.

The British failed in both endeavors, but touched off the war by killing eight Massachusetts men at Lexington Green. The Redcoats then encountered a larger force of Minutemen near Concord Bridge and were driven back in a daylong retreat to Boston, suffering heavy losses. Thus, the Revolutionary War began with a stunning American victory, not with the American defeat that Romney described.

In misreporting the start of the Revolution, Romney joins some of his past rivals for the Republican presidential nomination, Texas Gov. Rick Perry and Minnesota Rep. Michele Bachmann, in getting basic facts about America’s Founding wrong.

Earlier in Campaign 2012, Gov. Perry put the American Revolution in the 1500s and Bachmann put the opening battle in New Hampshire, not Massachusetts.

“The reason that we fought the revolution in the 16th Century was to get away from that kind of onerous crown if you will,” Perry said, missing the actual date for the war for independence by two centuries and even placing it before the first permanent English settlement in the New World, Jamestown, Virginia, in 1607, the first decade of the 17th Century.

While pandering to Tea Party voters in New Hampshire, Bachmann declared, “You’re the state where the shot was heard around the world in Lexington and Concord.” (She may have gotten confused because there is a Concord, New Hampshire, as well as a Concord, Massachusetts.)

However, one can almost excuse such historical ignorance coming from two public officials who live far away from the historic events. It’s harder to comprehend how Romney, who lived in Massachusetts much of his adult life and was governor of the state for four years, could get such a basic historical fact how the Revolutionary War began wrong.

Key events, including Dr. Joseph Warren dispatching Paul Revere and William Dawes to warn the countryside of the British attack, occurred virtually within eye sight of Boston’s Beacon Hill where the State House sits. These also are events that are near the heart of every Bay State citizen and are celebrated each April with the Boston Marathon on the Patriots Day holiday.

Yet, Romney committed to writing in a book that he claims to have personally authored an account of the start of the Revolutionary War that is upside down. He has British warships attacking and capturing Boston, a British victory, rather than the Redcoats being bloodied by the Minutemen at Concord and driven back into Boston, an American victory.

One could say that the real “Case for American Greatness” began very differently than Mitt Romney describes.

[For more on how the American Right gets the Founding wrong, see Consortiumnews.com’s “America’s Founding Pragmatism.”]

← More on ‘Vanity of Perfectionism’
A Map’s Inconvenient Truth →