Exclusive: America’s Founders were not marble statues, but rather real people facing tough challenges. To make ends meet, the esteemed Abigail Adams dabbled in black-market goods, and that kind of tough-minded pragmatism not starry-eyed idealism imbued the Constitution and guided the early nation, Robert Parry writes.

Perhaps it was inevitable that the American Right with its bottomless pot of money would pour some of it into the pockets of clever propagandists who would rewrite the nation’s founding narrative and transform the Constitution’s Framers into anti-government zealots.

After all, the founding narrative has a powerful appeal to many Americans as the Bible does to Christians and can be selectively cited by unscrupulous politicians to justify pretty much whatever they want. The Right also has invested in a giant megaphone that can amplify messages so loudly that lies and myths become history and truth. 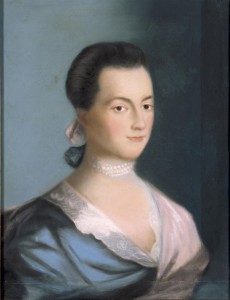 Abigail Adams, wife of President John Adams and an early advocate for women's rights, in a portrait by Benjamin Blythe.

So, it shouldn’t be surprising that we now see ill-informed right-wingers dress up in Revolutionary War costumes and declare themselves Tea Partiers, while the people who actually pulled off or supported the real Tea Party have been recreated as the Ayn Rands of the 18th Century, extreme free-market ideologues who despised “guv-mint.”

The actual Tea Party and the “Don’t Tread on Me” flags, which were both directed at the British imperialists in support of American independence, are today repackaged as attacks on the U.S. government, the same institution that the Founders created so they could start building a strong and independent nation. Up has become down.

The real historic counterpoints to the anti-British Tea Party and “Don’t Tread on Me” flags were the “Join, or Die” banner demanding American unity and the Constitutional Convention in 1787, which repudiated the states-rights-dominated Articles of Confederation in favor of a vibrant central government in the U.S. Constitution.

But that isn’t history that helps the Right’s propagandists because it reveals the key Founders to be dedicated to a constructive national unity seeking pragmatic solutions to the country’s problems, not to free-market extremism at any cost.

Because the real history doesn’t work for the Right, it has spent much time and money turning the history inside-out. Bright young ideologues scour the historical record to cherry-pick a few out-of-context quotes to bend the founding narrative rightward. [For instance, see Consortiumnews.com’s “Madison: Father of the Commerce Clause.”]

So, the Right continues to shape-shift the Framers of the Constitution (and more broadly the nation’s Founders) into ideologues who despised government and cared only about individual liberty. But the actual history reveals them to be pragmatic individuals who viewed government as a crucial force for organizing the new society and building a strong nation.

Yes, the Founders cared about liberty (at least for white men) but most of them viewed a constitutional government as a means for restraining the excesses of democracy, then a fairly untested system of governing. That explains the Constitution’s intricate system of checks and balances and the six-year terms for senators, originally appointed by state legislatures.

To the Constitution’s architects, government also was the means to focus the nation’s resources on building a nation to withstand the economic and political challenges from the far more powerful European states. These Founders saw the disorder from the Articles of Confederation as a threat to the hard-won independence.

In other words, if there was a dominant “originalist” notion of how the nation’s governance should work, it was pragmatism; it was pulling together to get done what needed to be done. The key Founders were not wedded to some fixed economic ideology or some extreme vision of liberty.

These were real people with real problems. As the Revolution dragged on, many of its leading figures faced not only physical danger but financial ruin. They looked for ways to make ends meet even if they had to cut ethical corners.

For example, one of the couples most widely revered for their contributions to the Revolution, John and Abigail Adams, resorted to a black-market scheme to raise enough money to avoid losing their home and property in Massachusetts.

Many of Abigail Adams’s famous letters to her husband, as he served the revolutionary cause in Philadelphia and Europe, amounted to requisitions of supplies that could be sent back to Boston, along with his official correspondence, via the fastest and safest means of American transportation.

Abigail Adams then marked up the prices on the precious goods and sold them through a relative, Cotton Tufts Jr., so her involvement and that of her husband would not be revealed and provoke a possible scandal. [See Woody Holton’s Abigail Adams.]

In retrospect, none of this should reflect badly on John and Abigail Adams, who sacrificed greatly for the revolutionary cause. They were simply doing what they had to do to make it through dangerous and difficult times.

Similarly, General George Washington had a mix of personal and patriotic reasons for hating the Articles of Confederation, which had allowed the 13 “independent” states to renege on their financial commitments to the Continental Army and, after the war, had undermined economic reconstruction.

Washington, like other Founders, had invested in undeveloped land to the west and thus recognized the necessity to build canals and roads for reaching this territory and making it more valuable.

In 1785, Washington established the Potowmack Company, which began digging canals to extend navigable waterways westward along the Potomac River. But these efforts were hampered by the national disorganization under the Articles of Confederation.

So, in 1787, Washington and Madison engineered the most significant shift of governing power from the states to the central government in American history. In secret meetings in Philadelphia, a convention, which had been assigned the limited task of proposing amendments to the Articles, instead scrapped that states-rights structure and drafted the U.S. Constitution.

The Constitution eliminated key wording of the Articles, which had granted the states “sovereignty” and “independence.” Instead, the federal government was given legal supremacy. Madison even wanted to give Congress the authority to veto any state law, though a compromise was struck, giving that power ultimately to the federal courts.

In one of its most important decisions, the Constitutional Convention approved Madison’s plan to give Congress an unlimited power to regulate interstate commerce. Madison touted this Commerce Clause as a way to promote the construction of roads and canals and to take other steps to strengthen the American economy.

Thus, the idea of public-private collaboration to enhance U.S. commerce along with federal regulatory power was there at the beginning, contrary to the Right’s current propaganda portraying the Founders as free-market extremists caring only about individual liberty. [See Consortiumnews.com’s “Did the Founders Hate Government?“]

Famously, the Constitutional Convention reached other compromises that revealed the uglier side of the founding pragmatism. To avert a splintering of the young country, the Framers accepted the continuation of slavery, which was a major industry in the agricultural South and which touched on the personal wealth of key figures, including slave owners Washington and Madison.

So, it is hard to argue as Republican presidential candidate Mitt Romney did before the National Rifle Association on Friday that the Framers were libertarians committed to the high-minded principle in the Declaration of Independence, that “all men are created equal.”

Still, there is much to admire about the Founders and their courage battling for independence against a tyrannical monarchy. Nothing in history or today is a case of black hats versus white hats. Usually it’s gray hats or at least mud-splattered hats.

America’s founding narrative also can be a powerful force in modern American politics and mostly for the good. It can be applied honestly with the nation’s finest of First Principles providing inspiration and guidance to the present. But the narrative also can be twisted dishonestly to promote destructive or self-serving ends.

That is where the nation finds itself now, as the Right has distorted the founding narrative and sold the false version to millions of gullible Americans, who think they are standing with the Founders in opposing practical solutions to the nation’s problems.

Most likely, Founders like Washington and Madison would be shocked by the ideological extremism that has been superimposed on their practical attempts to find a way forward for the nation and to make it more competitive in the world.

It is way past time for honest historians to get off the sidelines and join this battle for a truthful recounting of the nation’s early years. The American people are in desperate need of some lessons from the pragmatic Founders.