Toeing the neocon line, Mitt Romney denounced Iran as the world’s “most destabilizing nation” despite polls in the Middle East putting Israel and the United States at the top of that list, as Flynt and Hillary Mann Leverett note at www.RaceForIran.com.

Standing reality on its head, at least in the eyes of most Middle Easterners, presumptive Republican presidential nominee Mitt Romney declared during his recent visit to Israel that the Islamic Republic is “the most destabilizing nation in the world.”

In fact, reputable surveys conducted by international and regional polling groups, see here and here, show that, by orders of magnitude, largely Sunni Arab populations see Israel and the United States as much bigger threats to their security and interests than Iran. 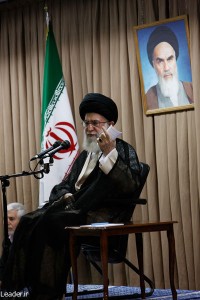 Al Jazeera asked our colleague, Seyed Mohammad Marandi of the University of Tehran, to comment on Gov. Romney’s remark. [To see the segment, click here.]

Mohammad’s observations that, given the record of American policy in the Middle East (and all the death and destruction it has caused), the United States is hardly in a position to “complain very much about Iran” and that, from an Iranian perspective, there is not a lot of difference between Romney and President Obama are well presented.

His explanation why the “soft war” that the Obama Administration is currently conducting against the Islamic Republic is not that different from a “hot war” is especially eloquent. We, though, want to pick up on Mohammad’s response to the interviewer’s suggestion that it is Iranian intransigence which is blocking progress in the nuclear talks and prompting tougher sanctions:

“The Iranians have been talking. The Iranians are basically saying that ‘we are willing to negotiate.’ But the Western position is ‘you give up everything and then we’ll start talking.’ The Iranian right to enriching uranium is a right that all sovereign countries have. And the Iranian Revolution itself was partially about dignity and independence.

“The Iranians are not going to accept being a second-rate country. This is not the Saudi regime or the Jordanian regime. This is a country that is fiercely independent. So the Iranians will continue to enrich uranium within the framework of the NPT and international law.

We think that is an important statement, both of the Iranian position and of reality. We have long argued that, if Washington accepted the principle and reality of internationally safeguarded enrichment in Iran, it would become eminently possible, not to say relatively easy, to negotiate a satisfactory resolution to the Iranian nuclear issue.

But the United States, even under the Obama Administration, does not want to do that, for recognizing Iran’s right to enrich implies recognizing the Islamic Republic as a legitimate political entity representing legitimate national interests. We think that is unlikely to change after the U.S. presidential election in November, regardless of whether Romney or Obama wins.

America’s unwillingness to recognize the Islamic Republic as a legitimate actor with legitimate interests is thwarting diplomatic prospects on other fronts. Last week, the Iran’s Permanent Representative to the United Nations, Ambassador Mohammad Khazaee, made a statement during a Security Council discussion on the “Situation in the Middle East.” [See here.]

Khazaee’s statement offered a substantive analysis of regional dynamics in the Middle East: “The Middle East region is witnessing a widespread transformational thunderstorm that has hit across this region.

“The region is witnessing dramatic changes and people are aspiring for democracy and opposing dictators supported by some powers in the West. At the same time the situation in the Middle East region is getting ever more complex. There are more and more threats from terrorism, extremism and foreign interventions which are all impediments to growth, development and stability in the region.

“In this situation, any miscalculations, making wrong decisions and fuelling the fire will affect the whole region and harm many people, as well as all stakeholders. This becomes too risky when in a given situation there is a deliberate attempt to change the realities on the ground through force and armed conflict and creating a fait accompli.”

On the basis of this analysis, Khazaee argued that there needs to be a

“resetting or a revision of approaches towards the developments in the region. The West must revise its approach about the Middle East.

“There seems to be only one approach ahead of us that could bring peace, stability and prosperity and that is cooperation rather than confrontation, genuine response to the desires of the people rather than forcing them to accept what seems to be an artificial and superficial solution.”

Turning specifically to Syria, Khazaee noted that, in the Islamic Republic’s view,

“the current crisis should only be resolved through national dialogue and in a peaceful manner. There are numerous efforts by certain states to further complicate the situation in Syria by providing financial aid and arms to armed groups. Sabotage and terror as well as violence against innocent people must be brought to an end.

“The regional countries should cooperate with one another to resolve the Syrian crisis so that the final result would be to the benefit of Syrian people, the region and the international community.”

Of course, there is nothing really new in this statement of Iranian policy; we discussed Tehran’s perspective on Syrian developments in our last post. [See here.] It is striking, though, that even some American foreign policy elites are now beginning to argue that Washington should be engaging Tehran over Syria.

Of course, Iran’s view of the possibilities for regional cooperation is not limited to Syria. For some time, we have pointed out that the Islamic Republic has emerged, over the last decade or so, as an indispensable actor in virtually all of the major political and strategic dramas unfolding across the region, including post-conflict stabilization in Afghanistan, creating a more stable and secure Persian Gulf, and fighting jihadi extremism, precisely as American standing and influence have been declining.

The Arab Spring has only accelerated and intensified these trends. As we have repeatedly argued, the United States cannot achieve any of its stated, high-priority goals in the region absent better relations with the Islamic Republic.

But hegemonic ambition dressed up as do-gooder liberalism makes it difficult for the United States to assess accurately its strategic situation. The Obama Administration’s approach to the Middle East provides a striking demonstration of this point.

In his Al Jazeera appearance, Seyed Mohammad Marandi offers a clear overview of the American policies, including the policies of the Obama Administration, that have eviscerated the United States’ standing among the vast majority of Middle Easterners.

But American commentators willfully overlook the fact that, according to reputable international polls, regional publics hold U.S. policy in even deeper contempt today than they did when President George W. Bush left office.

Indeed, the dominant assessment in Washington foreign policy circles, and in the Obama Administration, holds that the United States isn’t doing that badly at navigating the Arab Spring; moreover, the “mainstream” view posits that the Islamic Republic is the biggest “loser” from the Arab Spring.

One does not have to be a neoconservative to believe these things; this has become the new conventional wisdom in Washington, espoused by people who would strenuously and sincerely reject any effort to lump them in with neocons. [See, for example, here and here.]

On the basis of this (utterly mistaken, in our view) assessment, the United States, whether under a reelected Obama Administration or a new Romney Administration, will almost certainly continue its current, failing, and ultimately corrosive attempt to reassert hegemony in the Middle East.

Flynt Leverett served as a Middle East expert on George W. Bush’s National Security Council staff until the Iraq War and worked previously at the State Department and at the Central Intelligence Agency. Hillary Mann Leverett was the NSC expert on Iran and from 2001 to 2003  was one of only a few U.S. diplomats authorized to negotiate with the Iranians over Afghanistan, al-Qaeda and Iraq. [This article was originally published at RaceforIran.com. For direct link, click http://www.raceforiran.com/is-iran-%e2%80%9cthe-most-destabilizing-nation-in-the-world%e2%80%9d-or-an-essential-partner-for-building-stability-in-the-middle-east.]

← Why Romney Insulted the Palestinians
More on ‘Vanity of Perfectionism’ →