The new Batman movie, “The Dark Knight Rises,” envisions a social order overturned by a violent and vengeful rabble, a parody of Occupy Wall Street activists transformed into the villains of this pro-One Percent propaganda film, writes Phil Rockstroh.

In the contest between Stupid and Evil, Stupid reaps far more destruction. Why? Stupid prevails by the sheer force of numbers in its ranks. But the argument is moot: Because all too often Stupid is working for Evil believing it is serving as a force for good and, I might add, for degrading wages as well.

German-born filmmaker, Leni Riefenstahl (1902-2003) insisted to her dying breath that her 1936 masterwork of visual bravura, “Olympia,” documenting the 1936 Summer Olympics, held in Berlin, Germany, and funded and promoted by Adolf Hitler and the Nazi state, was not a political film nor was intended as propaganda for the Third Reich as writer/director Christopher Nolan is claiming his “The Dark Knight Rises” is not a political movie. 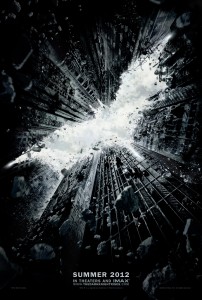 Poster for "The Dark Knight Rises"

But we are told to relax ruminate on a jumbo bucket of popcorn and suck down the high-fructose soda of our choice We should allow our limbic system to ascend to the throne room of consciousness to simply let the spectacle pull us along, as in a trip through a high-tech funhouse.

Historically, a component of fascism has been the visceral appeal of mass spectacle — the drowning of the burdens of Industrial Age selfhood into an intoxicating immersion in the anonymity of the mob.

Another aspect is the promotion of shadow projection, i.e., the attempt to lessen inner conflict and shame involving dark-tinged, hidden emotions and yearnings by projecting those traits on outside groups, e.g., the political use of racism to displace class-based resentment; the caricatures created to demonize the enemy, appropriated by governments and promulgated in popular culture to mobilize support for war.

In “The Dark Knight Rises,” Nolan (perhaps unconsciously he doesn’t seem all that bright and self-aware) deploys the psychological trope of shadow projection by portraying members of an Occupy Wall Street-type popular insurgency as boilerplate, comic book villains who rise from the city’s underbelly, compelled by murderous grievances, to inflict a reign of chaos, reminiscent of Terror-gripped, late 18th Century/ early 19th Century France, on the city’s economic elite.

What is the writer/director getting at here? Whether Nolan is aware of it or not, he has made a fascist epic.

Batman, from its inception was always a hyper-authoritarian myth. Comic Books, at their inception and rise during the Great Depression of the 1930s, reflected a middle/upper class unease regarding those popular heroes of the disaffected laboring class such as Pretty Boy Floyd and John Dillinger. Woody Guthrie’s take on song writing is germane to the subject of movies as well. Woody averred: All songs are political.

Hollywood movies are suffused with capitalist false consciousness? And how could they not be? The “successful” members of the entertainment “business” have done quite well by the system, thus have been bestowed with all the privileges of the One Percent.

Moreover, certain self-appointed arbiters of good taste and social propriety have posited the canard that the recent madman-inflicted, firearm-wrought tragedy at an Aurora, Colorado, cinema exhibiting Nolan’s “The Dark Knight Rises” should not be politicized. Nonsense.

Withal, the Second Amendment is not the word of God writ large across the eternal heavens. It is an archaic notion of a past, rural/agrarian era, and crafted by an assembly of land-holding, powdered wig-clad aristocrats.

Does the uncertainty of these times and the fading of cherished concepts evoke feelings of unease within you? Then how about trying this? Quit stroking your guns and hyperventilating over the depleted embers of dying delusion: Get over the hagiography of this sham democratic republic, and begin to re-imagine and remake the world anew.

Regarding all the bombast and braggadocio of rightist Second Amendment true believers, who claim that guns are the last, best hope to stand against government tyranny: Where were these sentinels of freedom when the operatives and enforcers of the U.S. national security/police state brought its brutality down on peaceful Occupy Wall Street dissidents?

Neither they nor the vast majority of people in the U.S. possess any concept of — nor do they give a rodent’s rectum about freedom. Because the fledgling nation’s solution to what they termed the “Indian problem” was addressed by the use of firearms, the habit of viewing and deploying guns as a solution to societal ills has bequeathed a violent, blood-sodden legacy upon the culture.

To all you compulsive gun-strokers — heirs of the hateful legacy of your genocidal ancestors — I ask you this — how do you like existing under dismal, degraded conditions such as these?

Seemingly, from their graves, my Native American ancestors (My late father was born of half native descent.) have cursed you. But the grim truth is, on a collective basis, through our acceptance of a toxic cultural mythos, the people of this nation have conjured this curse, and have, by their clinging to death-besotted attitudes and attendant actions, seeded the winds of fate.

Regarding gun violence in the U.S., the situation is very simple. The Second Amendment is not only antiquated, but is an outright menace to public good. Nations that do not fetishize guns, and have said fetish codified into law and imprinted into the public’s imagination are not afflicted by any degree of violent gun deaths.

Although its origins and workings seem to us mysterious and evanescent, evil remains proliferate because our traumatized psyches see it as a force of good. Evil is a deranged angel of self-preservation, convinced his wicked machinations and destructive fury are bulwarks against outside forces aligned to bear his doom.

“A man who is unconscious of himself acts in a blind, instinctive way and is in addition fooled by all the illusions that arise when he sees everything that he is not conscious of in himself coming to meet him from outside as projections upon his neighbor.” — Carl Jung: “The Philosophical Tree” (1945). In CW 13: Alchemical Studies. P.335

To those firearm apologists who proffer the assertion that one should not blame guns for the acts of madmen let me ask you this? There are unstable individuals residing all over the world, and have throughout every era, what is it about the U.S. that engenders a social milieu wherein so many unhinged individuals go on murderous rampages, and why is the death toll so high therein?

The startlingly obvious answer: The easy availability of firearms and a toxic mythos surrounding these weapons that promotes their ownership and drowns out reasoned discourse on the subject.

Restricting the manufacture, thus profit motive, of firearms is a must … to keep them out of the hands of criminals, psychopaths, and idiots, and that includes the cops.

The problem of evil would be more easily remedied if evil people saw themselves as evil. But evil does not arrive in the form of a new computer application (Irredeemable Wickedness, version 13. 13) that foul-minded types can download into their psyches. Evil creeps up on you when you’re going about the mundane business of the day.

Will we, as a people — inculcated by cultural mythos and saturated by shallow, sensationalist mass-media narratives — learn anything about the hideous, tragic nature of non-virtual reality violence from this latest in a long series of gun-wrought mass murder?

Gun-clutching pathology — and sorry, people, that is exactly what it is — is engendered by emotionally displaced feelings of powerlessness. The ridiculous number of guns, combined with racism and wealth inequity, in this deeply troubled nation, contributes to the endless number of firearm-related tragedies that nations that have sane gun laws — meaning tight restrictions — don’t suffer.

You boys and girls can swoon in all the hyper-macho, retrograde, Sarah Palin-level, Second Amendment-conflating fantasies that your besieged minds can conjure — but it will not change the reality that it is the people of this country’s sacred illusions and attendant fetishizing of guns that makes worse the very situation of which they live in fear. What a waste of human life and mental real estate.

Accordingly, the work of Hollywood artificers, such as Christopher Nolan, reflects collective pathologies at large in the culture.

All too many big-budget, Hollywood action movies, epic in scale and one dimensional in content, are saturated with the empty grandiosity of fascist thought. Carl Jung noted that evil generally comes with an aura of emotional detached coldness. Apropos: The shop-worn device of the super-villain is fascist conceit — a projection of the coldness and overkill of the U.S. police state/militarist empire on imaginary villains.

Evidently, Nolan has internalized the fascist inclinations inherent to late-stage capitalism. His cinematic images are over-wrought, yet cold — a fascist paradox that are catnip to troubled personalities, such as James Holmes, whose inner torments and concomitant actions mirror the collective nature of this violence-worshiping culture.

Only a society as violently (and, I fear, irredeemably) bughouse crazy as the one extant in the U.S. would arrive at the assertion that an individual who carried out a deadly shooting rampage in a packed movie theatre could be feigning madness, or, in the words of a corporate press headline, “James Holmes’ behavior sign of psychosis or faking it, expert says.”

In a nation that, for example, accepts as normal the deaths of hundreds of thousands of Iraqis, supports state-applied torture, and the slaughter of children by predator drone attack, yet gibbers on about the latest outrage committed by some sub-cretinous, Reality Television celebrity — the standard for psychosis and the standard of so-called normal will dovetail. To paraphrase one wit: Fish should be the last creatures queried regarding the existence of water.

Phil Rockstroh is a poet, lyricist and philosopher bard living in New York City. He may be contacted at: phil@philrockstroh.com . Visit Phil’s website http://philrockstroh.com / And at FaceBook: http://www.facebook.com/phil.rockstroh

9 comments for “Deranged Angels of Self-Preservation”