Exclusive: Mitt Romney took his campaign to Israel with a belligerent speech suggesting that he, as President, would happily support an Israeli war against Iran. In a major foreign policy speech, he also ignored Palestinian rights and repeated some old Mideast canards, reports Robert Parry.

Republican presidential candidate Mitt Romney told an audience of Israelis and some wealthy pro-Israel Americans that he is prepared to employ “any and all measures” to stop Iran from gaining a nuclear weapons “capability,” a vague concept that arguably already exists.

Romney’s speech in Jerusalem on Sunday was accompanied by a comment from his top foreign policy adviser Dan Senor seeming to endorse an Israeli unilateral strike against Iran. “If Israel has to take action on its own,” Senor said, “the governor would respect that decision.” 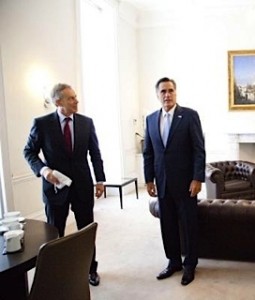 In what was widely interpreted as an attempt by Romney to peel some Jewish votes and particularly Jewish financial support away from President Barack Obama, Romney insisted that he has long supported an aggressive strategy against Iran.

“Five years ago, at the Herzliya Conference [on Israeli security], I stated my view that Iran’s pursuit of nuclear weapons capability presents an intolerable threat to Israel, to America, and to the world,” Romney said on Sunday. “That threat has only become worse.

“Now as then, the conduct of Iran’s leaders gives us no reason to trust them with nuclear material. But today, the regime in Iran is five years closer to developing nuclear weapons capability. Preventing that outcome must be our highest national security priority.

“We must not delude ourselves into thinking that containment is an option. We must lead the effort to prevent Iran from building and possessing nuclear weapons capability. We should employ any and all measures to dissuade the Iranian regime from its nuclear course, and it is our fervent hope that diplomatic and economic measures will do so. In the final analysis, of course, no option should be excluded.”

By elevating Iran’s achievement of a nuclear weapons “capability” to America’s “highest national security priority” and vowing to “employ any and all measures” to prevent that eventuality, Romney is essentially threatening war against Iran under the current situation. In that, he is going beyond the vague language used by President Obama, who himself has sounded belligerent with his phrasing about “all options on the table” to stop Iran if it moves to build a nuclear weapon.

However, the nuance here is significant, since U.S. intelligence agencies and even their Israeli counterparts have concluded that Iran has not decided to build a nuclear weapon even as it makes progress in a nuclear program that Iranian leaders say is for peaceful purposes only. Still, those lessons from a peaceful nuclear program arguably can give a country a nuclear weapons “capability.” [See Consortiumnews.com’s ““US/Israel: Iran NOT Building Nukes.”]

In recent months, American neoconservatives and sympathetic journalists have slipped in the new weasel word “capability” in the face of complaints that the earlier formulation about Iran seeking nuclear weapons was contradicted by the U.S. intelligence assessment. For most casual readers, the subtle change was barely noted but the word “capability” can mean pretty much anything.

To deny Iran a nuclear “capability” would almost surely require a war between the United States and Iran, a course that some neocons have been quietly desiring for at least the past decade when the Iraq invasion was seen as a first step to bringing “regime change” to Iran or as some neocons joked at the time, “real men go to Tehran.”

Romney’s speech in Israel was also peppered with the usual exaggerations about Iran’s President Mahmoud Ahmadinejad making threats about “wiping this nation off the map.” Though that quote is now widely known to be a mistranslation, U.S. leaders, including President Obama, have continued to cite it as part of their tough-talking indictment of Iranian intentions.

Indeed, repeating the bogus quote has become almost an expected signal of support for Israel. Romney even mocked those who note the mistranslation as something of Ahmadinejad apologists by adding: “only the naive or worse will dismiss it as an excess of rhetoric.”

Beyond Romney’s full-throated advocacy of Israeli policies in the Middle East, his speech was also notable in that he made no reference to Palestinian rights or the two-state solution to the Israeli-Palestinian conflict. Romney’s references to the Palestinians were limited to his condemnation of Hamas, the militant group that now governs Gaza.

To drive his apparent disdain for Palestinian rights home, Romney referred to Jerusalem as Israel’s capital, something the Obama administration avoids because the Palestinians hope that East Jerusalem might someday become the capital of their future state.

Besides ignoring Palestinian desires for statehood and self-determination, Romney finished his speech with flowery and some might say hypocritical rhetoric about the commitment of the United States and Israel to the rule of law and to democracy. He said:

“We both believe in democracy, in the right of every people to select their leaders and choose their nation’s course. We both believe in the rule of law, knowing that in its absence, willful men may incline to oppress the weak. We both believe that our rights are universal, granted not by government but by our Creator.

“I believe that the enduring alliance between the State of Israel and the United States of America is more than a strategic alliance: it is a force for good in the world. America’s support of Israel should make every American proud. We should not allow the inevitable complexities of modern geopolitics to obscure fundamental touchstones.

“No country or organization or individual should ever doubt this basic truth:  A free and strong America will always stand with a free and strong Israel. And standing by Israel does not mean with military and intelligence cooperation alone. We cannot stand silent as those who seek to undermine Israel, voice their criticisms. And we certainly should not join in that criticism. Diplomatic distance in public between our nations emboldens Israel’s adversaries.

“By history and by conviction, our two countries are bound together.  No individual, no nation, no world organization, will pry us apart. And as long as we stay together and stand together, there is no threat we cannot overcome and very little that we cannot achieve.”

The New York Times reported that among the Americans flown to Israel to witness Romney’s speech were casino magnate Sheldon Adelson, who has vowed to spend $100 million to defeat Obama; Cheryl Halpern, a New Jersey Republican and advocate for Israel; Woody Johnson, owner of the New York Jets; John Miller, chief executive of the National Beef Packing Company; John Rakolta, a Detroit real estate developer; L. E. Simmons, the owner of a private-equity firm in Texas with ties to the oil industry; Paul Singer, founder of a $20 billion hedge fund; and Eric Tanenblatt, a Romney fund-raiser in Atlanta.

[For the full text of Romney’s speech, click here.]

16 comments for “Romney Ups the Ante in Israel”