Mitt Romney wants American Jewish voters to know he’s ready (if not eager) to back an Israeli preemptive war against Iran. Romney’s recent bellicose comments in Jerusalem add pressure on President Obama to escalate his support for an Israeli strike, too, says ex-CIA analyst Ray McGovern.

Republican presidential candidate Mitt Romney’s strong pro-Israel statements over the weekend, including his endorsement of Jerusalem as Israel’s capital (a reversal of long-standing U.S. policy), increases the pressure on President Barack Obama to prove that he is an equally strong backer of Israel.

The key question is whether Israeli Prime Minister Benjamin Netanyahu and Defense Minister Ehud Barak will interpret the presidential campaign rhetoric as an open invitation to provoke hostilities with Iran, in the expectation that President Obama will feel forced to jump in with both feet in support of our “ally” Israel. (Since there is no mutual defense treaty between the U.S. and Israel, “ally” actually is a misnomer, at least in a juridical sense.) 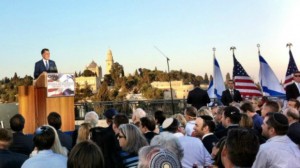 As we saw 10 years ago with respect to Iraq, if one intends to whip up support for war, one needs to find a casus belli, however thin a pretext it might be. How about juxtaposing “weapons of mass destruction” with terrorism. That worked to prepare for war on Iraq, and similar rhetorical groundwork for an attack on Iran is now being laid in Israel.

Mr. Netanyahu broke all records for speed in blaming Iran and Hezbollah for the recent terrorist attack that killed five Israelis in Burgas, Bulgaria, and in vowing that “Israel will react powerfully against Iranian terror.” But what is the evidence on Iranian or Hezbollah involvement? Bulgarian officials keep saying they have no such evidence. More surprising still, government officials in Washington and elsewhere keep warning against jumping to conclusions.

So far the “evidence” against Iran consists primarily of trust-me assertions by Mr. Netanyahu. On Fox News Sunday on July 22, Mr. Netanyahu claimed Israel has “rock-solid evidence” tying Iran to the attack in Bulgaria. The same day on CBS’s Face the Nation, Mr. Netanyahu said, “We have unquestionable, fully substantiated intelligence that this [terrorist attack] was done by Hezbollah backed by Iran,” adding that Israel gives “specific details to responsible governments and agencies.”

Did the Israelis somehow forget to give “specific details” to Bulgarian and U.S. officials?

At a joint news conference with White House counter-terrorism adviser John Brennan in Sofia early last week, Bulgarian Prime Minister Boyko Borisov admitted that he was aware of no information concerning the terrorist or those who dispatched him. Mr. Brennan’s July 25 talks with top Israeli officials, it appears, were similarly unproductive. According to the Israeli newspaper Haaretz on July 26: “A week after the Burgas attacks, Israeli, Bulgarian, and U.S. [officials] still have no leads regarding the identity of the suicide bomber.”

These events took place against an historical backdrop pregnant with relevance. July 23 was the 10th anniversary of a meeting at 10 Downing Street, at which the head of British intelligence casually revealed the fraudulent origins of the coming attack on Iraq. The official minutes of that meeting were leaked to London’s Sunday Times, which ran them on its front page May 1, 2005. No one has disputed their authenticity.

This is how the minutes record the core of the briefing by Sir Richard Dearlove, the British intelligence chief, who had just conferred with his U.S. counterpart, George Tenet, at CIA headquarters on July 20, 2002, on what was in store for Iraq:

“Military action was now seen as inevitable. Bush wanted to remove Saddam, through military action, justified by the conjunction of terrorism and WMD [weapons of mass destruction]. But the intelligence and facts were being fixed around the policy.”

The “fixing” of intelligence is bad enough. But note Mr. Dearlove’s explanation that war with Iraq was to be “justified by the conjunction of terrorism and WMD.” Translation: We will claim Saddam has weapons of mass destruction and that he might well give them to terrorists, unless he is stopped forthwith. Mr. Netanyahu is now taking the same line on Iran.

Never mind the elusive evidence on the perpetrators of the attack in Bulgaria. Never mind that Defense Secretary Leon Panetta posed the direct question to himself on Face the Nation on Jan. 8 and then answered it: “Are they [the Iranians] trying to develop a nuclear weapon? No.” Never mind that 10 days later Israeli Defense Minister Ehud Barak said essentially the same thing during an interview on Israeli Army Radio.

The likelihood of hostilities with Iran before the presidential election in November is increasing. Beware of “fixed” intelligence.

Ray McGovern is a retired 27-year veteran of CIA’s analysis division whose responsibilities included preparing and delivering the president’s daily brief. His email is rrmcgovern@gmail.com. [This article appeared first at the Baltimore Sun’s Web site.]

← Deranged Angels of Self-Preservation
The Deep Mystery of American Murders →