The Libor scandal is just the latest revelation of how the VIPs of high finance rig the system for themselves and their friends while millions of “common people” are driven into poverty. But the fix is also in when it comes to buying political protection, write Bill Moyers and Michael Winship.

Every day brings more reminders of the terrible unfairness that besets our country, the tragic reversal of fortune experienced by millions who once had good lives and steady jobs, now gone.

An article in the current issue of Rolling Stonechronicles “The Fallen: The Sharp, Sudden Decline of America’s Middle Class” and describes a handful of middle-class men and women made homeless, forced to live out of their cars in church parking lots in Southern California. 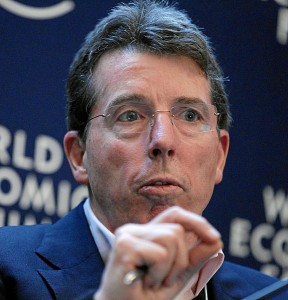 One of them, Janis Adkins, drove a van filled with her belongings to Santa Barbara, where she panhandled at an intersection with a sign reading, “I’d Rather Be Working Hire Me If You Have a Job.”

Once upon a time she had a successful plant nursery business in Utah that annually grossed $300,000. But two years after the nation’s financial meltdown her sales had dropped by 50 percent and the value of her land plunged even more. She tried to refinance but four banks turned her down flat.

“Everyone was talking about bailouts,” Adkins told reporter Jeff Tietz. “I said, ‘I’m not asking for a bailout, I’m asking you to work with me.’ They look at you, no expression on their faces, saying, ‘There’s nothing we can do.’”

“Nothing we can do.” And yet it was banks like these who helped get people like Janis Adkins into such desperate jams in the first place. When faced with their own financial catastrophes, all those big-time bankers came running to the government and taxpayers for those aforementioned bailouts worth hundreds of billions of dollars, then scooped up big bonuses and perks for themselves, and went back to business as usual.

And what a business! You’ve most likely been hearing about the newest scandal in banking, centering on Barclays Bank in Great Britain and something called Libor. That stands for London Interbank Offered Rate and involves a group of bankers who set a daily interest rate affecting trillions of dollars of transactions around the world. Your home mortgage, your college debt, your credit card fees; all of these could have been affected by Libor.

Now you would think the rates would be set by market forces, right? Aren’t they what makes the world go ‘round? But it turns out some of those insiders were manipulating the index for their own gain, to make their banks look better off during the financial crisis, lower their borrowing costs, and raise their profits by cheating. Picking our pockets and lining theirs.

The Economist magazine describes it as “the rotten heart of finance.” Here are some of the e-mails that have come to light: A banker in on the fix writes another, “Dude. I owe you big time! Come over one day after work and I’m opening a bottle of Bollinger.”

One employee after being asked to submit false information, answered: “Always happy to help.” And another, recruiting a colleague in the fix, wrote: “If you know how to keep a secret, I’ll bring you in on it.”

Caught with its hand in the cookie jar, Barclay’s agreed to pay nearly half a billion dollars in fines to British and American authorities, and as many as 20 other megabanks are under investigation, including Deutsche Bank, Citigroup, UBS, HSBC, and JPMorgan Chase. As one MIT authority on finance told CNN, “This dwarfs by orders of magnitude any financial scams in the history of markets.”

In the middle of this mess is an American named Bob Diamond. He was the CEO of Barclays and the man behind Barclays’ takeover of what was left of Lehman Brothers when, at the height of the financial crisis in 2008, Lehman filed for the largest bankruptcy in U.S. history.

His goal was to make Barclays a global investment powerhouse but his enormous salary — his net worth has been estimated at $165 million — and unrepentant defense of the financial industry’s behavior led one British government official to describe him as “the unacceptable face of banking.”

Diamond did wind up apologizing for Barclay’s role in the Libor interest rate scandal, even offering to forfeit his annual bonus — last year he received one worth more than $4 million. But in the end, under pressure from stockholders and public opinion, he was forced to resign.

Meanwhile, the ripples from the scandal continue to spread. The New York Times reports that the city of Baltimore, stricken by financial losses and layoffs, is in the midst of a court battle against the banks that set the Libor index and that, “Now cities, states and municipal agencies nationwide, including Massachusetts, Nassau County on Long Island, and California’s public pension system, are looking at whether they suffered similar losses and are weighing legal action

“American municipalities have been among the first to claim losses from the supposed rate-rigging, because many of them borrow money through investment vehicles that directly derive their value from Libor. Peter Shapiro, who advises Baltimore and other cities on their use of these investments, said that ‘about 75 percent of major cities have contracts linked to this.’”

What’s more, indications are that government agencies like the Bank of England and the British treasury also may have been involved, or at least looked the other way, raising questions whether other government agencies including our own Federal Reserve may have played a role.

That remains for the investigators to find out but according to The Washington Post, the Federal Reserve Bank of New York said “it had received word as early as 2007 from the British bank Barclays about problems” with Libor.

“In testimony last week before the British Parliament, former Barclays chief executive Robert E. Diamond said the bank had repeatedly brought to the attention of U.S. regulators as well as U.K. regulators the problems that the bank was experiencing in the Libor market.

“He said the bank’s warnings to regulators that Libor was artificially low did not lead to action. Barclays’ regulator in the United States is the Federal Reserve Bank of New York, which was run at the time by current Treasury Secretary Timothy F. Geithner.”

This week the Senate Banking Committee asked for meetings with the principals involved and the House Financial Services Committee sent a letter to the New York Fed asking for transcripts of a dozen phone calls with Barclays executives.

But how far will inquiries go, especially when both American political parties are so beholden to high finance for cash? Just hours after Bob Diamond’s resignation, Mitt Romney’s campaign announced that, sadly, the disgraced financier would no longer be hosting one of two Romney fundraising events for American expatriates being held in London later this month.

But no worries. The Boston Globe notes that “still among those hosting the events is Patrick Durkin, a registered lobbyist for Barclays Durkin, who has been a top Romney bundler, is one of seven chairs for the reception and among the 13 co-chairs for the dinner.

The non-partisan Center for Responsive Politics reports that through the end of May, Bob Diamond and other Barclays employees had donated nearly a quarter of a million dollars to the Romney campaign and of course, the entire securities and investment industry has been a major donor to the Republican, more than any other.

They’re giving to President Obama, too; just not as much, although they’re Number 3 on the list of top ten interest groups sending cash to the president and the Democratic National Committee.

And you wonder why the banksters still roam free, like gunslingers in a Wild West town without a sheriff.

2 comments for “How Banksters Rig the System”