Exclusive: Mitt Romney is fast becoming the new Teflon man. Whenever he faces criticism for his past business practices, “independent fact-checkers” rush to his rescue and insist that he’s been wronged, regardless of what the evidence actually is, Robert Parry notes.

The fraternity of “independent fact-checkers” is digging in to defend Republican presidential candidate Mitt Romney against accusations that his Bain Capital participated in shipping American jobs overseas despite, ironically, acknowledging that Romney did invest in and profit from such operations.

The core of this Romney defense, which has now become a centerpiece of a new Romney attack ad labeling President Barack Obama a liar, is Romney’s claim that he was not responsible for what Bain Capital did after he took a partial leave of absence to oversee the Winter Olympics in February 1999. 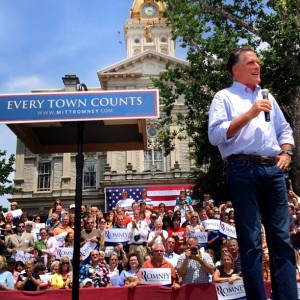 The “fact-checkers” uncritically accept this Romney departure date despite contrary evidence contained in dozens of Securities and Exchange Commission filings from Bain Capital entities after February 1999.

For instance, one summary of Bain investments via Bain Capital Fund VI, dated Feb. 13, 2001, lists Romney as “the sole shareholder, sole director, Chief Executive Officer and President of Bain Capital and thus is the controlling person of Bain Capital.”

Yet, the Annenberg Center’s “FactCheck.org” gives Romney a pass on everything that happened after February 1999, declaring that Romney had stated twice on official federal disclosure documents that he “has not been involved in the operations of any Bain Capital entity in any way” since leaving for the 2002 Olympics. FactCheck.org notes that “a falsehood [on these forms] could draw a federal felony charge.”

However, it’s also true that filing fraudulent SEC reports can be a felony, including telling investors that Romney was the “controlling person” if indeed he had nothing to do with the company. Either Romney was “the controlling person of Bain Capital” or he “has not been involved in the operations of any Bain Capital entity in any way.” It’s hard to square the circle on how both could be true.

It’s also a curious argument from “independent fact-checkers” that Romney, who decided to invest in companies that promoted themselves as facilitators of outsourcing and off-shoring jobs for American companies, had no responsibility for these actions just because he took a partial leave of absence from Bain Capital, a firm that he still owned and surely influenced.

Yet, that is what FactCheck.org argues, despite acknowledging: “There is no question that Bain invested in some companies that helped other companies outsource work and that some of that work went overseas. That was the core business for Modus Media and SMTC Corp., two outsource companies featured in a June 21 article in the Washington Post that has been the basis of recent Obama TV ads.

“Bain also invested in U.S.-based companies that sold goods manufactured here and abroad, and some of those companies closed U.S. facilities and eliminated U.S. jobs. But we found no evidence to support the claim that Romney, while he was still running Bain Capital, shipped American jobs overseas.”

However, FactCheck.org insists in defiance of the SEC filings and other evidence that the cutoff of Romney’s responsibility came in February 1999, not when he actually resigned and became a passive investor more than two years later. His disclosure forms even show him receiving executive compensation of more than $100,000 as late as 2002.

When some of these facts were pointed out by the Obama campaign, FactCheck.org simply brushed them aside with a curt dismissal that “your complaint is all wet.”

In its argumentative reply, FactCheck.org insisted that you must even disregard contemporaneous news accounts in which Romney and other insiders described his plans to continue part-time control of Bain Capital. For instance, a Boston Herald interview with Romney in February 1999 described Romney’s plans to “stay on as a part-timer with Bain, providing input on investment and key personnel decisions.”

But FactCheck.org chooses to accept later self-serving accounts about Romney working 16-hour days, seven days a week, after he arrived in Salt Lake City to oversee the upcoming Winter Olympics.

Yet, if he actually were working that many hours, who’s to say that he didn’t spend a few of those 112 hours each week checking in with his Bain Capital subordinates back in Boston? Are we to believe that none of his underlings called the boss about major decisions that would have impacted Romney’s personal wealth?

And what kind of “fact-checkers” would engage in such a hair-splitting defense of a politician anyway? What’s clear is that Romney shared in the responsibility for investing in companies that specialized in helping other companies cut their costs by shifting jobs to places where workers earned less, often a lot less.

Free-market economists can defend this business strategy and presumably Romney saw the value in these tactics when he pulled the trigger on the investments but isn’t it absurd to argue that Romney bears no responsibility for the consequences of these investments, even if he did relinquish day-to-day control of Bain in February 1999?

Romney and his Bain Capital team were famous for carefully examining each company that was a candidate for investment and a couple of these firms promoted themselves as specialists in outsourcing, as Washington Post investigative reporter Tom Hamburger explained in a front-page story on June 21.

After studying SEC filings, Hamburger reported that Romney’s Bain Capital “owned companies that were pioneers in the practice of shipping work from the United States to overseas call centers and factories making computer components.”

In other words, Romney’s venture capital firm wasn’t just investing in companies that shipped jobs overseas themselves, Bain owned companies that were trailblazing the practice of outsourcing American jobs to low-wage companies like China and India. The story said:

“A Washington Post examination of securities filings shows the extent of Bain’s investment in firms that specialized in helping other companies move or expand operations overseas. While Bain was not the largest player in the outsourcing field, the private equity firm was involved early on, at a time when the departure of jobs from the United States was beginning to accelerate and new companies were emerging as handmaidens to this outflow of employment.

“Bain played several roles in helping these outsourcing companies, such as investing venture capital so they could grow and providing management and strategic business advice as they navigated this rapidly developing field.

“Bain’s foray into outsourcing began in 1993 when the private equity firm took a stake in Corporate Software Inc., or CSI, after helping to finance a $93 million buyout of the firm. CSI, which catered to technology companies like Microsoft, provided a range of services including outsourcing of customer support. Initially, CSI employed U.S. workers to provide these services but by the mid-1990s was setting up call centers outside the country.

“Two years after Bain invested in the firm, CSI merged with another enterprise to form a new company called Stream International Inc. Stream immediately became active in the growing field of overseas calls centers. Bain was initially a minority shareholder in Stream and was active in running the company, providing ‘general executive and management services,’ according to SEC filings.

“The corporate merger that created Stream also gave birth to another, related business known as Modus Media Inc., which specialized in helping companies outsource their manufacturing. Modus Media grew rapidly. In December 1997, it announced it had contracted with Microsoft to produce software and training products at a center in Australia. Modus Media said it was already serving Microsoft from Asian locations in Singapore, South Korea, Japan and Taiwan and in Europe and the United States.

“Two years later, Modus Media told the SEC it was performing outsource packaging and hardware assembly for IBM, Sun Microsystems, Hewlett-Packard Co. and Dell Computer Corp. The filing disclosed that Modus had operations on four continents, including Asian facilities in Singapore, Taiwan, China and South Korea, and European facilities in Ireland and France, and a center in Australia.

“According to a news release issued by Modus Media in 1997, its expansion of outsourcing services took place in close consultation with Bain. Terry Leahy, Modus’s chairman and chief executive, was quoted in the release as saying he would be ‘working closely with Bain on strategic expansion.’ At the time, three Bain directors sat on the corporate board of Modus.

“The global expansion that began while Romney was at Bain continued after he left [for the Olympics in 1999]. In 2000, the firm announced it was opening a new facility in Guadalajara, Mexico, and expanding in China, Malaysia, Taiwan and South Korea.

“In addition to taking an interest in companies that specialized in outsourcing services, Bain also invested in firms that moved or expanded their own operations outside of the United States. One of those was a California bicycle manufacturer called GT Bicycle Inc. that Bain bought in 1993.

“The growing company relied on Asian labor, according to SEC filings. Two years later, with the company continuing to expand, Bain helped take it public. In 1998, when Bain owned 22 percent of GT’s stock and had three members on the board, the bicycle maker was sold to Schwinn, which had also moved much of its manufacturing offshore as part of a wider trend in the bicycle industry of turning to Chinese labor.”

Hamburger’s article continued: “Another Bain investment was electronics manufacturer SMTC Corp. In June 1998, during Romney’s last year at Bain, his private equity firm acquired a Colorado manufacturer that specialized in the assembly of printed circuit boards. Within a year of Bain taking over, SMTC told the SEC it was expanding production in Ireland and Mexico.

“Just as Romney was ending his tenure at Bain, it reached the culmination of negotiations with Hyundai Electronics Industry of South Korea for the $550 million purchase of its U.S. subsidiary, Chippac, which manufactured, tested and packaged computer chips in Asia.

“The deal was announced a month after Romney left Bain. Reports filed with the SEC in late 1999 showed that Chippac had plants in South Korea and China and was responsible for marketing and supplying the company’s Asian-made computer chips. An overwhelming majority of Chippac’s customers were U.S. firms, including Intel, IBM and Lucent Technologies.”

In other words, Bain not only invested in companies that outsourced American jobs, it controlled companies that taught other U.S. corporations how to do it. Romney and his Bain analysts could surely spot a profitable business trend when they saw one.

But FactCheck.org still made a big deal out of the timing, that some of the actual off-shoring occurred shortly after Romney left for the Olympics. But that detail seems irrelevant in that, first, the companies were carrying forward a strategy developed much earlier and, second, Romney remained in charge of Bain Capital at least into 2001, even if he relinquished day-to-day control.

To shield Romney from political fallout from his business decisions amounts to bending over backwards, which is what FactCheck.org and other similar outfits do when it comes to Mitt Romney. They make endless excuses for him.

The Teflon that used to protect Ronald Reagan and the Bushes now appears to have been transferred to Mitt Romney. [For more, see Consortiumnews.com’s “Mitt Romney: Professional Liar.”]

← The Second-Half Fund Drive
How Banksters Rig the System →