Exclusive: This weekend, Occupy protesters are targeting the Bohemian Grove in California, where well-connected rich men go on retreats several weekends each summer. The secrecy of the 1980 encampment became a factor in the cover-up of possible “treason” by Ronald Reagan and George H.W. Bush, writes Robert Parry.

In 1992, the protectors of Ronald Reagan’s legacy and George H.W. Bush’s presidency were in a bind. They had gained the upper hand in shutting down an investigation into allegations that Reagan and Bush had gone behind President Jimmy Carter’s back in 1980 to undermine his negotiations to free 52 Americans held by Iranian radicals, but then one of their crucial alibis collapsed.

In a stranger-than-fiction moment, these protectors turned to the exclusive Bohemian Grove the target of a new round of Occupy protests this weekend as a location for cobbling together a replacement alibi, thus sparing the Establishment the unpleasantness of a thorough investigation into what had the appearance of “treason” by the widely admired Reagan and Bush Sr. 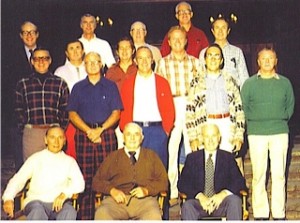 Group photo of Bohemian Grove members and guests at the Parsonage camp on the last weekend of July 1980. Note that William Casey is not in the photo.

Official Washington had thought questions about the so-called “October Surprise” of 1980 had been put to rest in November 1991 when the neoconservative New Republic and the pro-Establishment Newsweek splashed debunking articles on their covers.

Both magazines claimed that an alleged meeting between Reagan’s campaign chief William Casey and Iranians could not have happened because Casey had an alibi. Instead of meeting with Iranians in Madrid on Monday, July 28, 1980, as Iranian businessman (and CIA operative) Jamshid Hashemi had indicated, Casey was at a historical conference in London, his presence established by attendance records, the magazines said.

Gloating that they had proven once and for all that the October Surprise suspicions were “a myth,” The New Republic and Newsweek mocked any remaining doubters as “conspiracy theorists.”

The impact of the magazine stories and their ridiculing tone could not be overstated. Ted Koppel’s ABC News “Nightline” program, which had aired an interview with Hashemi about the Madrid meeting, was humiliated. The producer who had brought Hashemi in for the interview was soon out of a job.

Armed with the magazine articles, congressional Republicans blocked a full investigation in the Senate and convinced House investigators to simply go through the motions before ratifying the innocence of Reagan and Bush. But then something unexpected happened. The London alibi collapsed.

It turned out that historian Robert Dallek, who had given the lecture to the morning conference on July 28, 1980, had looked for Casey in the board room at London’s Imperial War Museum and was disappointed to find that Casey wasn’t there. Other attendees also noticed Casey’s absence; they recalled him arriving later in the day.

And a careful examination of the attendance records revealed that Newsweek and The New Republic had misread them. The markings actually showed Casey arriving in the afternoon, not the morning. In other words, the much-touted Newsweek/New Republic “alibi” was worthless.

So what were the House investigators to do? They certainly weren’t going to get serious and conduct an aggressive investigation. That might raise the ire of powerful Republicans and draw fire from influential neoconservatives. Instead, the investigators simply substituted a new and possibly even more ludicrous alibi. For that weekend in late July 1980, they put Casey at the Bohemian Grove.

The House investigators concocted this alibi by having Casey (who died in 1987) travel to northern California that last weekend in July 1980, take part in the exclusive retreat for rich and powerful men, then drive to San Francisco on Sunday afternoon and take an overnight flight to London, arriving for the historical conference on Monday afternoon, July 28, 1980.

The only trouble with this alibi was that there was not a shred of credible evidence to support it. Indeed, the clear evidence including records of Casey’s transactions at the Grove and a contemporaneous diary entry by one of the members who stayed in the Parsonage camp with Casey showed that Casey attended the Grove on the first weekend of August, not the last weekend in July.

But the House investigators were determined to create this new alibi for Casey. They went so far as to throw out the documentary evidence of Casey’s attendance in August, claiming that they had trumped that evidence with a notation by Reagan’s foreign policy adviser Richard Allen who had written down Casey’s home phone number on Aug. 2, 1980.

That act of writing down Casey’s home number proved, the House investigators said, that Casey must have been at home and therefore not at the Bohemian Grove the first weekend of August. Ergo, the only alternative date would have been the last weekend in July and presto! the new alibi was created.

Some of you might object to this reasoning. It might seem to you that just because someone writes a person’s home phone number down doesn’t mean the person is necessarily at home, especially since Allen told the investigators he had no memory or record of reaching Casey at his home.

As an experiment, you might test out the investigators’ logic yourself. If you’re, say, out to dinner with someone and you write their home number down, are they still sitting across from you or have they vanished and rematerialized at home?

One of the Democratic congressmen on the House task force investigating the October Surprise issue even made this observation. Rep. Mervyn Dymally, D-California, wrote a draft dissent that said “just because phones ring doesn’t mean that someone is there to answer the phone.” But Dymally said he was subsequently bullied by task force chairman Lee Hamilton into withdrawing his objection.

So, with the new Bohemian Grove alibi grafted in along with other alibis almost as meritorious the October Surprise allegations were again debunked, assigned to the loony ward of conspiracy theories along with the two dozen or so witnesses and various documents that indicated that Reagan’s team had gone behind Carter’s back on the hostage crisis to gain an advantage in the 1980 election.

Thus, the reputations of Ronald Reagan and George H.W. Bush were preserved. Everyone who mattered in the U.S. political/media structure could breathe a sigh of relief.

But the absurd Bohemian Grove alibi and the task force’s other strange cover stories never sat well with me, leading me in late 1994 to arrange access to some of the raw documents from the 1992 October Surprise task force investigation.

Inside the boxes of those records, I found a number of documents that pointed in the opposite direction from the official conclusion of Reagan/Bush innocence, including some that were marked “secret” and “top secret,” apparently left behind with the unclassified documents by mistake. I managed to make copies of some of these papers and later posted them on the Internet.

But one photo was particularly interesting to me. It was a group picture of the Bohemian Grove members and guests who had stayed at the Parsonage cottage on that last weekend in July 1980. The Parsonage is where Casey had been assigned in 1980. So, it would seem material to the October Surprise investigation whether he was in the group photo or not.

Not surprisingly, I guess, the House task force investigators hid the photograph and went ahead with their Bohemian Grove alibi.

After obtaining the photograph and other concealed evidence that revealed the House task force debunking to be more a cover-up than an investigation, I tried to speak with Rep. Lee Hamilton and chief counsel Lawrence Barcella about the discrepancies, but they refused to engage in the details. They clearly felt that I lacked the clout to get anyone to take my criticisms seriously and they were right.

To this day, the House task force debunking of the October Surprise allegations, with the Bohemian Grove alibi a key link in the chain, is the Official Wisdom of Washington. It also stands as a case study of how power and influence can trump logic and fact.

← How Banksters Rig the System
Egypt’s Outreach to the Saudis →