Exclusive: Harrowing predictions of climate scientists are coming true, as glaciers melt, forests burn, heat waves proliferate and freakish weather strikes in unexpected places. But the propagandists of global-warming denial have succeeded in silencing most politicians and the mainstream press, writes Robert Parry.

Something called a “derecho” a fast-moving line of thunderstorms strikes the Washington area knocking out power for days. Massive forest fires ravage Colorado. A record heat wave covers much of the country. The U.S. press treats these events as major stories, but two words are rarely mentioned: “global warming.”

What has become most striking about the growing evidence that climate change is a clear and present danger indeed an emerging existential threat is the simultaneous failure of the U.S. news media to deal seriously with the issue, another sign of how the Right can intimidate the mainstream into going silent. 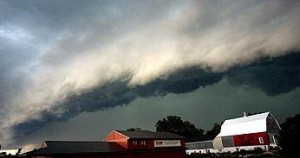 A "derecho," a pattern of thunderstorms racing in a straight line, is more common in the American Plains, but one struck the Washington area on June 29, 2012. (Photo credit: U.S. National Oceanic and Atmospheric Administration)

We have seen this pattern before, as the Right sets the media agenda by bullying those who threaten its ideological interests. Before the Iraq War, anyone who dared raise questions about the Bush administration’s justifications could expect to be marginalized or worse. Just ask Phil Donahue, Scott Ritter and the Dixie Chicks.

During Ronald Reagan’s presidency, his hard-nosed propagandists dubbed this tactic “controversializing,” that is, anyone who got too much in the way could expect to be subjected to systematic smears and professional deconstruction. With so many right-wing voices willing to say almost anything, it wasn’t hard to intimidate people.

The smart career play was always to retreat when these forces were arrayed against you. Why risk your six- or seven-figure salary on some issue when there are so many other stories that you can work on without all the grief?

Indeed, those journalists who wouldn’t be scared off could easily be discredited as “causists,” or people “with an agenda,” i.e., they’d be painted as “unprofessional.” So, under this view of “journalism,” it’s much more “professional” to treat the recent weather events arising from this over-heating planet as unfathomable “acts of God.”

And that’s exactly what we’ve seen. Though there are exceptions here and there, generally these heat-related weather anomalies have been handled like earthquakes, something that couldn’t be expected or stopped. There have been loads of human-interest stories about people coping or suffering but almost no larger context.

This phenomenon of silence both in the political and journalistic realms has not gone completely unnoticed. It’s just that those who make the point are ignored, too.

For instance, Sen. John Kerry, D-Massachusetts, gave a major speech on the Senate floor on June 19 lamenting the failure of the U.S. political system to address the global-warming crisis but the speech got little play.

Kerry said, “As a matter of conscience and common sense, we should be compelled to fight today’s insidious conspiracy of silence on climate change, a silence that empowers misinformation and mythology to grow where science and truth should prevail. It is a conspiracy that has not just stalled, but demonized any constructive effort to put America in a position to lead the world on this issue.

“In the United States, a calculated campaign of disinformation has steadily beaten back the consensus momentum for action on climate change and replaced it with timidity by proponents in the face of millions of dollars of phony, contrived ‘talking points,’ illogical and wholly unscientific propositions and a general scorn for the truth wrapped in false threats about job loss and taxes.

“Yet today, the naysayers escape all accountability to the truth. The media hardly murmurs when a candidate for President of the United States in 2012 [a reference to Mitt Romney] can walk away from previously held positions to announce that the evidence is not yet there about the impact of greenhouse gases on climate.

“The truth is, scientists have known since the 1800s that carbon dioxide and other greenhouse gases trap heat in our atmosphere. With the right amount of these gases, the Earth is a hospitable place for us to live. But if you add too much, which is what we’re doing right now, at a record pace, temperatures inevitably rise to record-setting levels. It’s not rocket science.

“Every major national science academy in the world has reported that global warming is real. Facts that beg for an unprecedented public response are met with unsubstantiated, even totally contradicted denial. And those who deny have never, ever met their de minimus responsibility to provide some scientific answer to what, if not human behavior, is causing the increase in greenhouse gas particulates and how, if not by curbing greenhouse gases, we will address this crisis.”

Kerry continued, “The level of dissembling, of outright falsifying of information, of greedy appeal to fear tactics that has stalled meaningful action now for 20 years, is hard to wrap one’s mind around. It is so far removed from legitimate analysis that it confounds for its devilishly simple appeal to the lowest common denominator of disinformation.

“In the face of a massive and growing body of scientific evidence that says catastrophic climate change is knocking at our door, the naysayers just happily tell us climate change doesn’t exist. In the face of melting glaciers and ice caps in the Arctic, Greenland and Antarctica, they say we need to ‘warm up to the truth.’ And in the face of animals disappearing at alarming rates, they would have us adopt an ‘ostrich’ policy and simply bury our heads in the sand.

“Al Gore spoke of the ‘assault on reason.’ Well, Exhibit A is staring us in the face: Coalitions of politicians and special interests that peddle science fiction over science fact. A paid-for, multi-million dollar effort that twists and turns the evidence until it’s gnarled beyond recognition.

“And tidal waves of cash that back a status quo of recklessness and inaction over responsibility and change. In short, it’s a story of disgraceful denial, back-pedaling and delay that has brought us perilously close to a climate change catastrophe.

“What’s worse, we’ve stood by and let it all happen, we’ve treated falsehood with complacence and allowed a conspiracy of silence on climate change to infiltrate our politics.

“The conspiracy of silence that now characterizes Washington’s handling of the climate issue is dangerous. Climate change is one of two or three of the most serious threats our country now faces, if not the most serious, and the silence that has enveloped a once robust debate is staggering for its irresponsibility.

So what was the reaction to Kerry’s address? It got some notice on blogs, especially those dedicated to climate-change issues, but received almost no attention from the mainstream news media.

Ten days after Kerry’s speech, the Washington area was struck by a “derecho,” a weather event virtually unknown to the people of the region. This straight line of fierce thunderstorms uprooted trees and knocked down power lines leaving much of the sweltering capital area in the dark and without air conditioning.

The devastation along with forest fires in Colorado and 100-degree heat over much of the country got lots of attention from the news media. But there was almost no discussion of the why.

Granted, no specific weather event can be traced directly to global warming, but climate scientists have been saying for years that the gradual increase in temperatures will be accompanied by more and more extreme weather patterns, exactly what the United States and much of the world are experiencing.

Yet, just as the U.S. news media failed the country in 2003 by caving to the Right’s pressure on the Iraq invasion, American journalism is now failing future generations by cowering in front of the loud voices of powerful climate-change deniers.

33 comments for “The Silence on Global Warming”