A United Nations conference is looking at ways to reduce global instability by regulating the international flow of guns and other conventional weapons. But the talks face the usual obstacles, including political resistance in the United States to any constraints on the gun trade, ex-CIA analyst Paul R. Pillar writes.

A conference opened last week under the auspices of the United Nations to draft a multilateral treaty aimed at controlling the international trade in conventional arms. Such a treaty potentially could do significant good, although many legitimate questions remain concerning its terms and feasibility.

Neither the good nor the bad is likely to be clarified in public discussion about the treaty within the nation that is the world’s biggest arms exporter and thus the most important player in this process: the United States. We are more likely to hear the sort of ill-informed debate that too often has characterized treatment of multilateral conventions, as we have seen most recently with the law of the sea treaty. 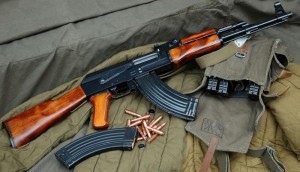 The background of the prospective arms-trade treaty being discussed in New York should make politicization of the issue in the United States unsurprising. A resolution of the U.N. General Assembly intended to advance the subject in 2006 passed with 153 states in favor, twenty-four abstentions and a vote against by the United States. Three years later, the Obama administration reversed its predecessor’s opposition and announced its support for negotiating the treaty.

The opening sessions of the conference featured what has become a staple of procedural issues in any forum connected to the United Nations: what to do with the Palestinian delegation. The United States followed its usual practice of falling in behind Israel and threatened to walk out if the Palestinians were included.

An eventual compromise involved what might be described as observer status with enhanced seating. This did not entirely please anyone, not least the delegation from the Vatican, which was given the same treatment as the Palestinians and complained about not being accepted as a full participant.

What debate has already taken place in the United States on the prospective treaty has featured some of the same infringement-of-sovereignty notions that were heard in opposing ratification of the law of the sea convention. In the case of the prospective arms-trade treaty, the National Rifle Association has been out in front with warnings about how the treaty supposedly would circumvent the Second Amendment.

Assurances that no such treaty would affect domestic laws about possession of firearms have not dissipated such notions. Last fall, a majority of U.S. senators signed a letter seconding the NRA’s worries about the Second Amendment.

Some of the legitimate reasons to raise doubts about an arms-trade treaty concern its effectiveness, and its effect on the arms balances in local conflicts, given the extent of gray-market arms dealing outside the control of governments that would be parties to the treaty.

Other legitimate concerns involve the inevitable differences of view in trying to develop criteria for proscribing or limiting arms transfers and in applying any such criteria consistently in different areas of conflict. One man’s contribution to local security is another man’s stoking of regional instability.

Informed debate about these and other legitimate concerns is likely to be less prominent than ill-informed statements about such things as taking away the people’s right to bear arms. The fact that the conference in New York is scheduled to conclude its work near the end of this month, amid a U.S. presidential election campaign, will make the subject ripe for the crasser forms of politicization.

On U.S. insistence, the rules of the conference provide that unanimity is required for a draft treaty to emerge directly from it. A plausible scenario is that unanimity will not be achieved, that a draft supported by most nations will go to the General Assembly for endorsement, and that a treaty will be opened for signature and will even enter in force without the United States having endorsed it.

That will repeat the experiences of the law of the sea convention and the treaty that established the International Criminal Court, with all the uncertainties of the United States not being a party to a major element of otherwise widely accepted international law. If that happens, among those likely to be disappointed will be American arms exporters, who look favorably on an arms-trade treaty as a way of standardizing the many different national rules with which they now have to deal.

← The Enigma of Yasser Arafat
The Silence on Global Warming →

6 comments for “Seeking Rules for the World’s Guns”