The announcement that scientists may have discovered a mysterious particle, called the Higgs boson giving mass to all matter, was a reminder of the majesty of the universe. But it comes at a time of a dumbed-down culture in America that is inflicting devastation on the planet, as Phil Rockstroh observes.

On July 4, the people of the U.S. marked the passing of another year’s perfunctory, Independence Day festivities. The date, also, was occasioned by the formal announcement from physicists at CERN (European Organization for Nuclear Research) that, according to the banner headline at CERN’s official website, “Higgs within reach Our understanding of the universe is about to change [Our] experiments see strong indications for the presence of a new particle, which could be the Higgs boson.”

Thus, augur the smart people at CERN, a change in our fundamental understanding of the universe, and our place as human beings in it, is at hand. From their lips to the mouth of the God Particle, this development, if true, would be cause for celebration — that a display of fireworks should be in order — because of an embrace of the philosophical and social implications of this discovery could be the starting point of a profound form of independence: the release from ossified systems of thought and being, such as those dominating the present era, including the hagiography of U.S. Independence Day. 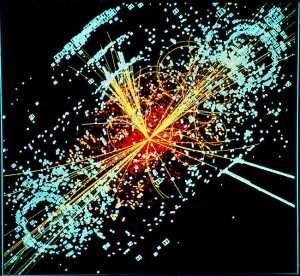 An illustration of a Higgs event showing -- after a collision of two protons -- a Higgs boson, which decays into two jets of hadrons and two electrons. The lines represent the possible paths of particles produced by the proton-proton collision while the energy these particles deposit is shown in blue.

The people of the U.S. need independence from the demonstrably false notion, held by so many that within their debt-enslaved, corporate interest-beholden lives, they possess any degree of meaningful independence.

As U.S. citizens, we are free to, without question, proclaim to the now credulous world how free we are — but when a citizen resists and takes action (e.g., Bradley Manning) he will, in rapid order, grasp the true nature of this sweet land of liberty. As Occupy Wall Street activists have recently apprehended, under the present order, an individual is at liberty to practice freedom of speech, as long as by doing so, one does not threaten the agendas of the privileged and powerful.

Any fireworks tracing the night sky should be viewed as a demand for the explosion of self-deception. Withal, the concept of independence, clutched by so many under late U.S. empire, is loud and showy, but ultimately evanescent and leaves one feeling empty at its conclusion a hollowness that traditional Fourth of July fare, in the form of obscene portions of hormone-injected, antibiotic-ridden, industrially slaughtered, barbecue-charred animal flesh and beer (the true opiate of the masses) can never sate.

The indicators strongly suggesting the existence of the Higgs Boson — a particle that serves as a creator and connecting principle of (seemingly) disparate matter — comes to us in an age, when the people of the U.S. seem unwilling or unable to connect the fact that greenhouse gases, emitted from the tailpipes of their automobiles idling at drive-thru windows of fast-food outlets serving industrial-bred, raised, hideously exploited, cruelly slaughtered, and carelessly processed animal flesh (an even larger contributor to Climate Chaos than the aforementioned automobiles’ exhaust particles) are responsible for less than propitious changes to global climate patterns.

News of the Boson particle — the so-called God Particle — into public consciousness arrives, as well, at a time, when as Carl Jung aptly posited, “the gods have become diseases.” In short, estranged gods (i.e., patterns of the human psyche that are analogs of terrestrial and cosmic patterns) invade the ego and reside therein as pathologies, i.e., compulsions, depression, anxiety, addiction, because their purpose has been discarded and forgotten, e.g., the recognition of the sacred quality of life and the evocation of the numinous through ritual.

And mainly to bring to humankind the recognition that we, most definitely, are not gods ourselves to the understanding that our mastery of fire and machine should not infect us with the hubris to believe we are the masters of the universe.

Moreover, we can start with a bit of humility regarding our relationship to the planet upon which we reside and depend on for our survival. The heat waves, droughts, wildfires, and super storms extant should serve as warning enough that there are forces larger than ourselves (that are beyond the control of our tiny, mad will) afoot in the world.

The existence of the Boson particle would pose essential questions regarding the nature of interconnection and interdependence, cosmological and terrestrial, and our place, as a species, among the order of things.

For example, through our hubris, we have conjured raging fires and rising sea levels. Ancient poets would have grasped and vehemently chanted tales of warning that the gods of fire and the sea had taken offense at our arrogance. We have reached an age when their metaphors are being made manifest.

Yet, give Americans the choice between freedom, art and science or all-you-can-eat buffets and the viewing of “Jersey Shore,” and, well they have already made their choice clear. Hence, we find ourselves, as a people, stranded in a howling wasteland of destiny deferred.

In a banana republic, there exists a vast stratification of wealth, wherein the middle and merchant classes have been conditioned to harbor little identification with the poor, but feel affinity, thus side with, an economic and military elite. In these societal structures, militarized police are used to quell dissent. The military is glorified and intellectuals are scorned. The function of the political class is to serve the status quo, and they are generally well rewarded for their efforts in behalf of their economic betters.

Any of this sound familiar? Rather than bananas, we have fast food burgers (grass-fed, free-range variety, of course, for the minority endowed with economic privilege).  Would you like an order of fries (or, in the case of the latter class, an arugula salad) with your fascism?

Due to the consolidation of wealth and privilege into fewer and fewer hands, requiring escalating amounts of officially mandated surveillance and brutality to maintain social order, the natural trajectory of late-stage capitalism tends towards hyper-authoritarian excess, even towards fascism.

Therein, liberals retreat to their comfort zones, while the forsaken laboring class constructs insulating walls of resentment. Dialog becomes prohibitive. “Reasonable” liberals gape with mortification at those to the political Right and Left of themselves, and attempt to cope by erecting buttresses of unassailable reason that outsiders perceive as citadels of implacable snobbery.

As important as the function is, and how devoid the retrograde Right seems in regard to it, in the struggle to re-imagine and remake the present order, intellectual prowess alone will not suffice, because the intellect, when it marries a like-minded soul, produces a progeny of idiots.

But when the intellect learns the painful dance of self-awareness i.e., develops an awareness of the living landscape of the heart, alive with breathing imagery, then it becomes possible to know the world, sans a fool’s swoon of self-referential arrogance.

As is the case with any natural disaster, the seemingly boundless font of stupid extant in the current day U.S. is a sublime thing (as in the relationship between the words, awe and awful) to behold. The scene unfolding before us evokes the mortifying sense of awe experienced while watching a seething nimbus of locust descending on a region’s harvest crop.

Images such as these can incur awful pain. There are so many walls of exponential inanity rising before us, in the present day U.S., that one can go mad with grief. We find ourselves within a labyrinth of idiocy; whatever direction we turn, we trudge headlong down yet another corridor of the dumb.

Yet, obstructions are not necessarily a bad thing. Barriers can stop one’s drift and slow down manic evasions. There must be something providential glimpsed when gazing upon the blank visage of the hopelessly dim something we can learn from those unwilling or incapable of learning. But what that is, I, myself, am apparently too dim to glean.

Then it follows: I am humbled. Humility is one key to learning. The loss of arrogant preconceptions opens one, heart and mind, to the novel to an emergent font of new forms.  The unmovable wall of stupid becomes a holy obstruction unfathomable as the face of divinity.

I feel like an idiot when I contemplate the unfolding of eternity. How can one match the eloquence of the night sky, or the weave of a spider’s web stippled with morning dew?

Madame Spider and Mother Boson, I stand before your craft a gibbering fool. But you have taught me this: Continue with the work you were born to perform. Live in the world to demure, would entail falling into the ranks of an idiot’s parade comprised of one.

There is much to learn from the stupid, unless the lesson is being presented, exclusively, in the form of first person singular.  No compulsion to gain permanent control can be successful. The field of battle, scattered with the slain corpses of our obsessive aspirations, stands as a testament to our desperate folly. Victory is a vain fantasy of the naive and the psychopathic.

Conversely, allow yourself to be touched by life caressed and buffeted by beauty, necessity, even mortification and grief. Just continue unfolding into life. All things are transitory. No state of being is permanent. This is the reason attempts at tyranny are an exercise in futility from the get-go.

On the day that Independence Day is celebrated in the U.S. arrived confirming evidence of the existence of the Boson Particle, a possible connecting component of matter. Accordingly, let’s make a few connections:

The present order has wrought economic tyrannies and inevitable environmental collapse, and is proliferate with the seeds of its own destruction. It should be evident to anyone with the cognitive capabilities of an over-ripe squash that global, neoliberal capitalism (and its game-rigging, political class-owning, mammon-worshipping cartel of privileged thieves) has entered into an exponentially increasing state of entropic breakdown.

Moreover, measures can be taken to give a push to its doomed trajectory. For example, deflating of the privilege-garnered, liberal comfort bubble, because mainstream liberalism is the buffer zone and graveyard for progressive change insofar as providing true aid for the laboring class and minority communities.

Let current day conservatives keep riding their train of crazy. Their vehicle is in runaway mode; therefore, the sane option is to get out of its hurtling way. Our tactic: Act is if the doom system has already collapsed (becoming part of the system is like a chicken going to work for KFC to “change the system from within”) and beginning to imagine and create the world anew.

Phil Rockstroh is a poet, lyricist and philosopher bard living in New York City. He may be contacted at: phil@philrockstroh.com . Visit Phil’s website http://philrockstroh.com / And at FaceBook: http://www.facebook.com/phil.rockstroh

← The Silence on Global Warming
The Mystery of Arafat’s Death →