The Vatican has scolded American nuns for deviating from Church doctrine. Conservative bishops decry President Obama’s health-care reform for violating their religious freedom. But some Catholics find this heated rhetoric at odds with the gentler message of Jesus, as Catholic theologian Paul Surlis said in this excerpted sermon.

Mark’s Gospel was written about 30 years after the death and resurrection of Jesus perhaps around the year 70 and it was written in a community that was undergoing persecution. By the year 70, it was 30 years since Jesus proclaimed the coming of the reign or rule of God, but instead of change had come persecution and fear.

What did Jesus mean by announcing the coming of the rule or reign of God and making it the center of his message and ministry in the first place? Jesus was speaking of what the social order would be like if God ruled. His message was one with political implications even though it was primarily religious. He was speaking to people, most of whom were impoverished and oppressed in many ways. 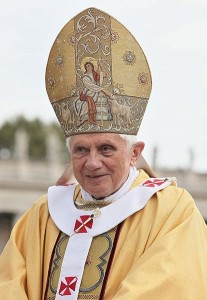 We recall that Palestine was a colony of the Roman Empire and taxes of various types were high. There were also temple taxes. Small landowners had lost their properties because of debt and they had become day laborers for wealthy landowners or vineyard owners who often cheated them of their wages and almost always underpaid them. Along with impoverished workers there were bands of robbers and beggars. Many people were sick and undernourished.

In such a situation to announce a new social order was welcome news, good news, to the poor and they flocked to Jesus who healed them and often fed them with bread and fish, the food of the poor.  Naturally, this activity was disturbing to the wealthy and powerful and they considered Jesus a rabble- rouser and a subversive who had to be got rid of.

Now, it’s 30 years later and the new social order promised by Jesus is not yet a reality, and the Jesus portrayed by Mark tells parables counseling patience and reminding the people that seed has to die in the soil before producing fruit.

The Jesus of Mark’s Gospel promotes trust in effect saying that God is in charge and the reign of God promised by Jesus is already a reality even if not yet fulfilled or evident. Like Paul the people are invited to walk by faith not by sight. There is an already and a not yet, what has already been accomplished in an undefeatable way but is not yet fully manifest, if it can be found at all in evidence.

The same remains true in our own place and time. Christian teaching on the dignity and equality of all persons helped to spark the anti-slavery movement and also helped to lead to the civil rights movement of the 1960’s which achieved and is still achieving far-reaching social change.

Like Mark’s hearers, we also live in that in-between time and we also experience conflict and could be tempted to question where is the reign of God to be found. It is meant to extend to the whole social order. The Church is the sacrament of the kingdom but is not identified with it.

But let us look at the church, at ourselves: We will soon be invited by the bishops to have a two-week period of public protest in defense of religious liberty. I suggest that we listen very respectfully but also carefully and critically to what the bishops have to say.

For my part, I do not see a war on religious liberty. At the least that is overheated rhetoric. A major extension of health care benefits to millions of the uninsured is being proposed and in areas that affect women there are very serious issues about which conflicts exist but these are all areas where dialogue, compromise and negotiations are called for.

Evoking the names of Stalin and Hitler in this situation is inflammatory and quite frankly outrageous and is not conducive to the civil discourse that is called for.

While some regard contraception as wrong, today most Catholics and other persons of good will see it as a matter to be decided by married persons according to their consciences and good medical advice, and this has been the case since 1965 when dissent from the papal position in Humanae Vitae became widespread and was tolerated by several national conferences of bishops in a stance that has never been repudiated.

Likewise there are persons for whom abortion is a feasible choice according to their consciences. Does one group, e.g., the Catholic bishops, have a right to impose their position on all other persons even in violation of their consciences? Surely, consciences are inviolable when convictions are sincerely held.

In a democracy there are always people who object to how tax money is used but that does not mean people can be exempted from being taxed. One example is nuclear weapons, many people are absolutely opposed to them but they still tolerate their existence; some wars are also in that category.

Conscientious objection is legitimate if called for and if one is prepared to accept legitimate alternatives. Persons who accept tax money (the money of the people) should expect that other persons’ convictions be provided for in the distribution of tax money. But we need to await the proposals from the bishops. All I’m saying now is let us be respectful, alert and critical.

And there is also the question of the sisters and the Vatican proposal to rein in the Leadership Conference of Women Religious. I would argue that the most faithful adherents of the teachings of the Second Vatican Council are women religious and they are faithful to the teachings of Jesus in an exemplary way.

Here is an excerpt from an insert by Fr. Koesel and found in a parish bulletin in Cleveland and I quote:

“One of the results of the council was that the nuns became more educated, more integrated in the life of the people and more justice-oriented than the bishops and pope. They are doctors, lawyers, university professors, lobbyists, social workers, authors, theologians, etc. Their appeal was that they always went back to what Jesus said and did. Their value lay in the fact that their theology and their practice were integrated into the real world.

“The Vatican sounds like the Pharisees of the New Testament – legalistic, paternalistic and orthodox – while “the good sisters” were the ones who were feeding the hungry, clothing the naked, visiting the sick and imprisoned, educating the immigrant, and so on. Nuns also learned that Catholics are intuitively smart about their faith. They prefer dialogue over diatribe, freedom of thought over mind control, biblical study over fundamentalism, development of doctrine over isolated mandates.”

I think that sums it up quite well.

8 comments for “Who Speaks for Jesus?”