In the era of Citizens United, a dilemma confronts Democrats who opposed the ruling but now face electoral disaster if they don’t tap into this flood of special-interest money. President Obama’s response has been to turn to celebrities in the entertainment business, as Michael Winship notes.

My neighborhood has become a cash machine for the Obama re-election campaign.

Don’t look at me; I had nothing to do with it. What’s happened is that over the decades I’ve lived in the West Village in lower Manhattan, it slowly has evolved around its longtime residents into a theme park for the affluent; the low-keyed, tree-lined blocks of brownstones and townhouses that always gave it much of its appeal now competing with designer clothing boutiques, bars and high-end restaurants.

I still love where I live, but rents, commercial and residential, have skyrocketed; many of the mom-and-pop stores that gave the area character have moved or been forced out of business. How long we happy few, we remnants of the middle class can hang on is the subject of much debate. In the meantime, we have become prime real-estate for Democratic and progressive fundraising. 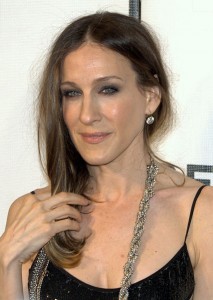 The other night the streets around my building were closed off as President Barack Obama paid a visit to the home of Sarah Jessica Parker and Matthew Broderick, just around the corner. There, a $40,000-a-person dinner, guests included Meryl Streep, Aretha Franklin and retail designer Michael Kors, garnered a reported $2.5 million for the president’s re-election. The Associated Press dubbed the event “Checks and the City.”

A similar traffic blockade took place in the neighborhood last summer when Mr. Obama came calling on movie producer Harvey Weinstein and guests. That time, he walked away with $2 million.

And the summer before, Anna Wintour, haute couture queen of American Vogue magazine, held an Obama party at her West Village house, at which the purported price of admission was at least $30,400 a person. (Ms. Wintour also co-hosted the Weinstein and Parker soirees).

Such events are a crucial part of the President’s fundraising strategy. At Bloomberg News, Kate Andersen Brower wrote, President Obama “is using the entertainment industry on both coasts to help fill the fundraising hole left by defections of some Wall Street donors.”

AP reported, “Obama’s team is getting outraised by motivated Republicans in a new, freewheeling environment, one in which wealthy donors can give unlimited amounts of money to outside political groups, known as super PACs, that can have huge sway over the presidential race. As one counter-response, Obama is borrowing on the power of entertainers to give big bucks themselves and to encourage others to give what they can

“From Tinseltown to Broadway, Obama has surrounded himself with blockbuster names lately: George Clooney, Julia Roberts, Reese Witherspoon, Spike Lee, Will Smith, Oprah Winfrey, Ellen DeGeneres, Cher and many others who make more in one year that most people do in a lifetime.

“‘Let’s face it: They help raise the money that you need to wage a serious campaign,’ said Robert Schmuhl, a professor of American Studies at the University of Notre Dame who has written about the intersection of politics and celebrity. ‘Most Americans today are involved in what we call the ‘celebrity culture’ anyway. They understand how it works.’”

Nonetheless, the president is taking heat for the amount of time he spends on the road, not attending town meetings or making campaign speeches before large crowds, but raising cash. The June 10 edition of the Los Angeles Times noted,“In three days of campaign travel this last week, President Obama spent just two hours on the soil of a battleground state, a small fraction of his time given that voters in those places are expected to decide the election.

“Instead, Obama rubbed elbows with wealthy donors in New York City, San Francisco and Los Angeles. They hadn’t shelled out $20,000 apiece just to cheer and watch him from a distance at a big rally.

“For years, the complaint in donor-rich states, including New York, Illinois and California, has been that presidential candidates take them for granted and seldom show up to campaign. But the race for money is vastly more competitive this year, and the list of actual battleground states is even smaller than before. The net effect is that both Obama and Republican rival Mitt Romney have spent a great deal of quality time in a few wealthy enclaves cloistered with the country’s prosperous elite.”

Molly Ball of The Atlantic observed, “During the latter half of his first term in office, President Reagan did not hold a single fundraiser for his reelection campaign, and just three for the Republican National Committee. President Obama’s total over the equivalent period, through Wednesday, was 164.

“This is not a partisan observation, it’s a measure of the staggering increase in recent decades in the amount of time sitting presidents devote to raising money for reelection.”

Part of Obama’s problem is that in a post-Citizens United world, the greater ratio of cash being thrown into this year’s elections comes in large measure from mega-wealthy conservatives with very deep pockets, casino mogul Sheldon Adelson, for example, who last week reportedly wrote a check to the pro-Romney Restore Our Future Super PAC for at least $10 million, more than twice what the president raised at the Sarah Jessica Parker dinner and a party afterwards at the Plaza Hotel.

(In fact, The Huffington Post reports Adelson may be spreading around at least $71 million to a variety of Republican Super PACs).

Fred Eychaner, chair of the media company Newsweb, has donated half a million to Priorities USA Action. The problem, as reported by Talking Points Memo, is that “of the 31 individuals or married couples listed by the Center for Responsive Politics (CRP) as having given $1 million or more, only seven are considered to ‘generally’ support liberal candidates.”

Further, aversion to the whole of idea of Super PACs from many Democrats and the Left diminished a willingness to give large sums to the Obama re-election effort. But that has started to change.

Evan McMorris-Santoro of Talking Points Memo reported, “Democratic donors, wary of giving money to the outside spending groups their candidates have railed against since the Supreme Court’s Citizen United decision, are starting to put their principles aside as the power of super PAC spending becomes more pronounced.”

The loss of the Wisconsin recall was “an eye-opener.”

“Democratic Party groups are now openly appealing to their donor base to give money to super PACs and other outside spending groups, saying they need the air cover even this early in the year.

Still, “A lot of these donors are disappointed in the president,” Democratic strategist Carter Eskew said in this report from NPR:

“It could be hedge fund managers mad about the President’s criticism of Wall Street or liberals who wanted him to close Guantanamo or big Democratic donors who want to be treated like something more than an ATM.”

According to Politico.com, Barack Obama’s decision not to accept public campaign funds in 2008 and his embrace of super PACs for this election year, after attacking them as a “threat to democracy”, are other reasons for disillusionment:

“As the 2012 election is saturated by billions of dollars, campaign-finance reformers have largely lost faith in a president they say is willfully neglecting his reformist agenda while cynically embracing key elements of a new, laissez-faire election system he’s long demonized.”

“When we win, we will use whatever tools out there, including a constitutional amendment, to turn this back. I understand the free speech argument, but when the Koch brothers can spend $400 million, more than the McCain campaign and the Republican Party spent last time, that’s very concerning.”

But the bottom line, as Molly Ball at The Atlantic concluded: “If it seems like all the fundraising must be getting in the way of the president’s day job, it probably is.”

← Who Speaks for Jesus?
New Movie Glamorizes CIA in Iran →