After conservative U.S. Catholic Bishops sued the Obama administration over its health-insurance requirement for contraceptives, many assumed the Bishops were upholding settled doctrine. But Catholic theologian Paul Surlis says Pope Paul VI incorrectly removed the issue from the Second Vatican Council in 1965.

At the Second Vatican Council in 1965, on the day the Bishops were to debate birth control, a message was delivered saying that Pope Paul VI had reserved the issue to himself and asking that the Bishops move on without dealing with the important question of contraception. The Bishops applauded.

Later that day at a press conference held by representatives of the U.S. Bishops, a religious affairs correspondent (I believe from Time magazine) asked why the Bishops had applauded. The Bishops present simply hung their heads and fumbled an unconvincing response. (I was present at St. Peter’s in Rome assisting Bishop Thomas J. Drury of Corpus Christi, Texas, as peritus,a Roman Catholic theologian giving advice at an ecumenical council.) 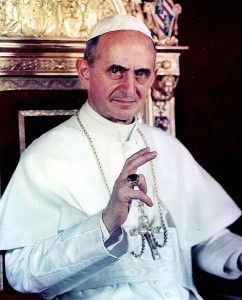 The Pope’s letter had made an unwarranted entry into Conciliar deliberations, since an ecumenical council is meant to be the highest teaching authority in the Catholic Church. But a conservative curia did not accept that view. The Pope’s intervention has since proven to be a major mistake that still causes suffering for Catholics and the Church.

In 1968, Pope Paul VI compounded the mistake by going against the view of the majority of his advisers and issuing a letter in which he asserted that every act of intercourse must be open to new life, meaning no birth control by artificial means.

The letter while authoritative was not infallible, as the pope himself pointed out. Many Catholics including theologians and priests dissented from the teaching. Bishops in national conferences intervened, but they too were divided. Some agreed with the pope, while others (about one-third of national conferences) stressed the legitimacy of dissent from the papal position.

In the Washington DC area, Father Charles Curran led the dissent from the papal teaching. He and other professors at Catholic University who joined in dissenting were fired by Cardinal O’Boyle but were later reinstated after student protests.

The Belgian Bishops, who along with other national conferences endorsed Curran’s dissent, wrote in 1968: “If someone competent in the matter and capable of forming a well founded judgment which necessarily supposes sufficient information after serious investigation, before God, reaches different conclusions on certain points, he has the right to follow his convictions in this matter, provided that he remains disposed to continue his investigations.”

This position has never been condemned or rescinded. At present, confusion is still being generated by the Catholic Church’s stance on birth control. There is no single position that would qualify for the status of Catholic doctrine.

As for Curran, Pope John Paul II deprived him of the title “Catholic theologian” in 1978 and Curran lost his job at CU. Subsequently, no U.S. Catholic university offered him a position. However, Southern Methodist University did, and he still teaches there.

Today, one may argue that the papal position as expounded in Humanae Vitae (Of Human Life) has been rejected through non-acceptance. A majority of Catholic couples follow their consciences in electing to practice contraception. Some bishops and a majority of moral theologians accept the legitimacy of this practice.

And all of these are part of the People of God, namely the Church, and what they advocate is Church teaching also. So at most there are different positions being argued even at the highest levels in the Church.

What is sometimes called “fundamental Catholic teaching” has now changed. And as is customary, when disputes exist, the legitimacy of conscience and obedience to conscience prevail.