In a new book, Predator Nation, Charles Ferguson (who directed the Oscar-winning film “Inside Job”) says banking executives implicated in the fraud that devastated the economy in 2008 should go to jail, a position applauded by Danny Schechter, who has long advocated the same.

The circle of those of us crusading for a jail-out of banksters and not another bailout for them is widening. Our newest member is Charles Ferguson, director of the film “Inside Job,” who is out with a new must-read book, Predator Nation, documenting and detailing how the financial elite and its values took over our culture and country.

When I first saw Ferguson’s film, coming out two years after my “Plunder: The Crime Of Our Time” on a similar subject, I was a bit jealous because of all the support he attracted from Sony and Hollywood insiders who waged a successful Oscar campaign on its behalf. 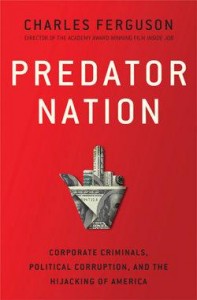 After selling a software company, he had access to big money for a film on big money. He could afford high production values but also the kind of marketing that indy filmmakers like myself dream about.

As a PhD, former business executive and government adviser, Ferguson also had developed a keen skill for synthesizing information and creating a filmic “explainer,” almost like a big screen power-point presentation, that recounts how we got into this financial crisis through government deregulation and/or complicity. A member of the elite himself, he is well schooled in how to talk to his counterparts.

Given the devolving state of our media and the fact that these issues are mostly covered in an arcane and superficial way, stashed away in business sections he was able to create a chronology-driven narrative by connecting facts that are often hidden in plain sight.

His was a top-down but lucid film that treated the harmful impact of the crisis in great detail but the impact on ordinary people was almost an afterthought. There was more on government than banks; it is more intellectual than emotional with more on protests in Iceland than America.

At the same time, because it had mainstream, if still far too limited distribution, it was as an eye-opener to people who weren’t paying attention or being informed even when they should have been, thanks to media blindness.

At least he wasn’t being totally ignored as were my film and companion book, The Crime of Our Time, on pervasive Wall Street fraud that predated his work. Not only wasn’t I a “name” but since I did not have insider credentials as an academic or financial journalist, I could be ignored by the press and even Ferguson.

Besides I only have a Masters degree and an honorary PhD, not the full-card Monte that Ferguson sports. All you get are brownie points for being first. I have written about this rejection by a media elite that looked the other way for Harvard’s Neiman Foundation in Journalism,

To my knowledge, Ferguson never claims to be on the Left. When he was at MIT, Ferguson’s hero/adviser was not the Institute’s most famous professor, Noam Chomsky, who blurbed my book, but economist Karl Kaysen, a World War II intelligence officer who later worked for President John F. Kennedy on nuclear policy.

Kaysen’s claim to “fame,” according to Wikipedia, was bizarre. He “was asked to prepare a report on how to utilize the US nuclear arsenal to preemptively destroy the Soviet Union’s nuclear capacity and its ability to retaliate with nuclear weapons. (His) report, which envisioned ‘only’ half a million to a million Soviet casualties, caused outrage and disgust within the administration, with White House Chief Counsel Ted Sorensen calling him crazy.”

Ferguson is not crazy but calculating when it comes to getting attention. To his credit, once he won the best-documentary Oscar, he used his 15 seconds of global visibility to call for the prosecution of Wall Street executives, not a major theme of his movie, but a gutsy and widely quoted news-making move.

“Three years after a horrific financial crisis caused by massive fraud, not a single financial executive has gone to jail,” he told the world. ”And that’s wrong!”  (In fact, one mortgage exec, exposed by ML-implode.com, is doing time along with many smaller fish with whom the government would not reach “settlements” as they have with bigger corporate criminals.)

If Michael Moore had said what Ferguson had, he would have been dismissed as a rabble-rouser. Ferguson’s business background and low-key style shielded him from ridicule.

Alas, there was no extra Academy airtime to explain that over 1,500 “banksters” had gone to prison years earlier after the far less serious S&L crisis or to urge support for the many organizations battling fraudulent foreclosures.

Suddenly, Ferguson most visibly had joined the ranks of journalist Matt Taibbi, former federal regulator William Black, the blogger Mandelman, former International Monetary Fund economist Simon Johnson, Aaron Krowne of Ml-implode, Yves Smith and a handful of others, myself among them, who have, for years, repeatedly called for prosecuting financial criminals, a course of action that does not win any favor in Barack Obama’s White House, which is too busy “bundling” Wall Street largesse for the President’s re-election campaign.

When “Inside Job” came out, we contacted Ferguson to see if he might be interested in supporting a petition campaign against banks as being not too big to jail, as well as to join a speaking tour on the issue. He never called back.

More recently, his publicist wrote me to see if I might be interested in having him on my radio show. After reading the book, I jumped at the chance, and we even discussed a possible date. The next thing I heard was that he was no longer interested, no reason given! Alternative media is not on his radar! Dismissed!

When I read his bio and the acknowledgements in his book, I guessed why. It is a class thing. Not only does he thank top execs in Hollywood for help and express appreciation to two gourmet restaurants in Berkeley, Chez Panisse and Oliveto, for feeding him well, but also curries favor with well- known millionaires whom he assures he is not against before announcing he is voting for Obama.

Perhaps he should read a newer expose, Bailout by Neil Barofsky, who was the Inspector General on the TARP bank giveaway and whose work was sabotaged by the Obama Administration.

Writes Naked Capitalism editor Yves Smith of his work, “His revelations show in stark detail just how captured by Wall Street our political system is; why the banks have not been held accountable; and how the failure to enact effective regulation has put the country in danger of an even bigger crisis in the future.”

Nominally against the system, Ferguson still curries favor with it, a smart maneuver to position himself as the “reasonable” alternative to more strident “crazies”, while selling movie tix and now books, of course.

The words capitalism and imperialism do not appear in the book’s index.  He makes only a fleeting positive reference to Occupy Wall Street and ignores all of the other nationwide anti-bank grassroots activism.

At points, he comes off as a one- percenter but I don’t really care about that. We need more one percenters to turn against their class interest, as he seems to have.

While his social critique is trenchant including attacks on corruption, greed, university complicity with the financial elites, etc. he offers no deep understanding of the system or call for its replacement by another.

He exposes university-based economic think tanks for not disclosing who subsidizes their research what they don’t say while I take on the mainstream media industry that distorts the news what they do say showing our different orientations. And just for the record, I worked in corporate network news.

Ferguson speaks briefly and approvingly, (maybe patronizingly) of Occupy, but the elite is his primary frame of focus. He is earnest and almost evangelical in his indictment. His analysis is often provocative and always well-written, but there is no real call to action, only some modest policy prescriptions.

His key points are these:

— “The financial sector has become increasingly criminalized, with the widespread fraud that caused the housing bubble going completely unpunished.

— “Federal tax collections as a share of GDP are at their lowest level in sixty years, with the wealthy and highly profitable corporations enjoying the greatest tax reductions.

— “Most shockingly, the United States, so long the beacon of opportunity for the ambitious poor, has become one of the world’s most unequal and unfair societies.”

The promo material does slam President Obama because “the Obama Administration has allowed financial criminals to continue to operate unchecked, even after supposed ‘reforms’ installed after the collapse of 2008.”

Based on many newly released court filings, it details the extent of the crimes, there is no other word, committed in the frenzied chase for wealth that caused the financial crisis. And, finally, it lays out a plan of action for how we might take back our country and the American dream.”

So far, a half dozen prominent economists and financial writers for elite publications seem enamored with Ferguson and his book.

Simon Johnson writes, “Charles Ferguson makes a convincing case that the world’s banking system was brought to the brink of complete collapse in 200809 by a virulent combination of unchecked greed and criminal behavior.

“Predator Nation provides a roadmap for prosecution, systematically covering the banks involved, the names of culpable executives, the obvious crimes, the precise laws broken, and the evidence hiding in plain sight. No doubt it will be widely ignored by our legal officials.”

But we need to ask ourselves why this liberal critique will be widely ignored and what we can do to insure it won’t be. the book is deserving of attention. I respect the prodigious effort, but what is also true is that the elite with whom he eats, or does business, is unlikely to be the agency for change.

Hopefully, Ferguson will realize that analysis often leads to paralysis without action, and that he has to get down with the 99 percent to raise hell with the hell that his book denounces.