Republican presidential candidate Mitt Romney’s “conservative” foreign policy contrasts with what many past GOP conservatives have advocated, such as Romney’s blunt assertion that he will follow Israel in setting U.S. policy in the Middle East, writes ex-CIA analyst Paul R. Pillar.

Anthropologists have only partially constructed the evolutionary paths of modern mankind and of human species that have died out. There is not necessarily direct progression from known species of one era to those of a later one.

The same is true of the varieties of homo politicus americanus, even though the fossil record is more complete because it is more recent. Contributing to confusion is the application of similar labels to very different sub-species at different times. 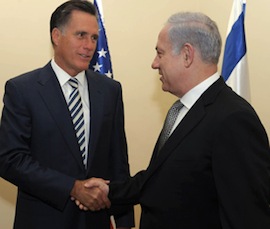 Such thoughts arise in reading Jacob Heilbrunn’s insightful commentary on the revisiting of the Richard Nixon story by Carl Bernstein and Bob Woodward. As Heilbrunn correctly points out, it was the Right and not just the Left that distrusted Nixon, with backward-looking liberals having perhaps more reason than conservatives to remember favorably many of Nixon’s policies. But the meaning of Right and Left in the United States has changed significantly since Nixon’s time.

The lineage of the conservative opposition to Nixon included Senator Everett Dirksen, who when nominating the conservative Robert Taft at the 1952 Republican convention pointed down at Thomas Dewey and said, “Don’t take us down the path to defeat again.”

It included Barry Goldwater telling conservatives at another Republican convention eight years later, conservatives who were not happy about Nixon getting the presidential nomination, to “grow up” if they wanted to take control of the party. It included Goldwater’s winning of the nomination four years after that, Ronald Reagan’s primary challenge in 1976 to Nixon’s successor Gerald Ford, and Reagan’s eventual electoral triumph in 1980.

But any ancestral lines from Reagan to the Right of today are at best tenuous and muddled. On many domestic and fiscal policies, it is hard to see any lines at all. According to former Reagan adviser Bruce Bartlett, Reagan’s tax increases, which he endorsed in return for spending cuts, totaled the equivalent of $367 billion in current dollars.

This past weekend former Florida Gov. Jeb Bush commented that both his father, Reagan’s vice-president and successor, and Reagan himself would have had a hard time winning a nomination from today’s Republican Party.

On foreign policy, it is misleading to describe Reagan’s approach, as Heilbrunn does, as having “essentially repudiated the Nixon-Kissinger approach to foreign affairs by substituting a combination of the old rollback doctrine and neoconservative anticommunism.” Reagan’s underlying assumptions about the USSR had something in common with those of George Kennan, in that they both foresaw the crumbling of the Soviet system from within due to that system’s inherent weaknesses.

Reagan did give the process a nudge by declaring an arms race, knowing the United States could always outspend the Soviets. There also were proxy wars, but they were much less a factor in the eventual crumbling. Stoking the Afghan insurgency may have been partially an exception, but that started as a project of Zbigniew Brzezinski and Jimmy Carter, whom no one can accuse of being neoconservatives.

There was nothing in Reagan’s policies anything like the neoconservative trademark, seen most clearly with the Iraq War, of trying to use U.S. military force to inject American values directly into benighted foreign lands ruled by loathed regimes.

Like Nixon and Kissinger, Reagan engaged with the chief foreign adversary of the day. And as with Barack Obama, a long-term (beyond any one presidency) objective of that engagement was the eventual abolition of nuclear weapons.

Some of the senior figures in Reagan’s administration, though not Secretary of State George Shultz, did not seem to believe Reagan really envisioned a nuclear-weapons-free world, and in any case did not accept that objective themselves. Cold Warriors such as Caspar Weinberger and William Casey seemed content, or even anxious, to wage that war forever.

In the two decades since the presidencies of Reagan and the elder Bush, a different subspecies, now bearing the label “conservative,” has evolved and has come to dominate a major portion of the American political environment. It is markedly different from previously dominant creatures who carried the same label as recently as 25 years ago, although one can find bits of genetic material from the likes of Weinberger or Casey.

The curious disjunction between the elder George Bush and the younger George Bush epitomizes the remarkable transition involved. Political anthropologists still have a lot of work to do in helping us to understand the evolution of this newer breed. Some attributes of the breed, such as a close link to revealed religion and a fixation on matters of the pelvis, may be rooted in larger societal trends or be reactions to those trends.

This political evolution can be considered part of an overall rightward lurch in American politics, but some of the most important characteristics involved cannot best be described in right-vs.-left terms. There are, for example, certain uses of the imperial presidency, with regard to which, as Heilbrunn aptly puts it, “next to George W. Bush and Dick Cheney, Nixon was a piker.”

Perhaps the most salient set of characteristics comprises a self-righteousness, an associated denial of legitimacy to political opponents, and a further associated resistance to compromise. These were the characteristics to which Jeb Bush was referring when he observed that Reagan, “based on his record of finding accommodation … as would my dad” would have had difficulty winning acceptance amid “an orthodoxy that doesn’t allow for disagreement, doesn’t allow for finding some common ground.”

Thomas Mann and Norman Ornstein, in their recent work on dysfunction in the American political system, put it succinctly and bluntly: “The GOP has become an insurgent outlier in American politics. It is ideologically extreme; scornful of compromise; unmoved by conventional understanding of facts, evidence and science; and dismissive of the legitimacy of its political opposition.”

The contrast between old and new is just as stark between some present-day congressional leadership and Everett Dirksen, who as Republican leader in the Senate, although he was a strong conservative on fiscal matters, worked closely and effectively with his Democratic counterparts and also was a key source of support for major aspects of Lyndon Johnson’s foreign policy.

The attributes of the new breed of conservatism have major implications for the foreign policy postures of today, including the positions of this year’s presumptive Republican presidential nominee, Mitt Romney. The self-righteousness and resistance to compromise show through.

Those positions include unbridled confidence in the all-purpose efficacy of U.S. military power, spending to expand that power substantially without regard to either specific uses of that power or fiscal implications, acceptance of permanent conflict with adversaries (including even the legacy Cold War adversary, Russia), rejection of engagement with adversaries, and contracting out a major portion of U.S. foreign policy to the government of Israel.

Romney has said: “The actions that I will take will be actions recommended and supported by Israeli leaders.” This is very different not only from what Richard Nixon did but also from what conservatives who opposed Nixon favored.

← The Dark Continuum of Watergate
Media Backsliding on Iran Nukes →

17 comments for “Romney Cedes US Policies to Israel”