Exclusive: America’s neocons continue to beat the drums for war with Iran, brushing aside warnings even from Israeli intelligence veterans. Another part of the propaganda is to merge a future war against Iran with the heroic memories of the Six-Day War nearly 45 years ago, as ex-CIA analyst Ray McGovern notes.

With the 45th anniversary of the Six-Day War of June 1967 coming early next month, pro-Israel pundits like syndicated columnist Charles Krauthammer are again promoting Israel’s faux-narrative on the reasons behind Israel’s decision to attack its neighbors.

The Krauthammers of our domesticated, corporate media seem bent on waging pre-emptive war against an accurate historical rendering of the actual objectives behind that Israeli offensive that overwhelmed Arab armies and seized large swaths of Arab territory, land that hard-line Zionists refer to as “Greater Israel,” i.e. rightly theirs. 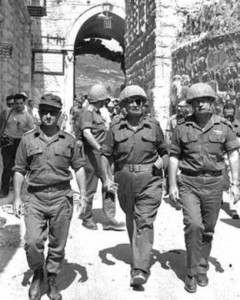 With its surprise attacks on June 5, 1967, Israel rapidly defeated the armies of its Arab neighbors. It gained control of the Gaza Strip and the Sinai Peninsula from Egypt, the West Bank and East Jerusalem from Jordan, and the Golan Heights from Syria.

The Sinai was returned to Egypt in 1979 as a result of the Camp David peace accord, a land-for-peace swap that U.S. President Jimmy Carter demanded and that then-Israeli Prime Minister Menachem Begin deeply resented.

Jewish settlement has proceeded apace on other territories conquered in the Six-Day War, particularly in the Palestinian West Bank, which Israel’s ruling Likud Party refers to by its Biblical names Judea and Samaria.

Likud’s charter declares that “the Jewish communities in Judea, Samaria and Gaza are the realization of Zionist values. Settlement of the land is a clear expression of the unassailable right of the Jewish people to the Land of Israel. The Likud will continue to strengthen and develop these communities and will prevent their uprooting.”

In other words, in the Six-Day War, Israel seized land that hard-line Zionists consider to be part of their ancestral legacy. The surprise attack in 1967 was the means to that end. The Likud Party emerged several years later with the explicit intent of consolidating that control through a settlement policy called “changing the facts on the ground.”

Yet, despite Israel’s continued expansion into those Palestinian lands, pro-Israel pundits are in a defensive mood these days, and with good reason. They see a particular need this year to whitewash Israel’s surprise attack on its Arab neighbors 45 years ago not only because the anniversary is likely to draw more than the usual attention but also because Israel’s strategic position has deteriorated markedly in the past year.

For instance, the 80 million-plus Egyptians are no longer neutered by the joint Mubarak-Israel-U.S. effort to repress them and co-opt them into passivity vis-Ã -vis the Palestinians. Serious contenders in the upcoming Egyptian election have said they would reconsider the Egypt-Israel Treaty of 1979.

Some leading Egyptian politicians have added that they would fling wide open Egypt’s border with Gaza, where about 1.5 million Palestinians live in what amounts to an open-air prison. These Egyptians also are saying strongly sympathetic things about the widespread suffering in Gaza and the West Bank.

Equally important, Egypt’s present government has already nullified the sweetheart arrangement under which Egypt was providing natural gas to Israel at bargain basement prices.  (That alone is a very big deal.)

And, in sad contrast to the deafening silence of senior American officials regarding Israel’s reckless killing of U.S. citizens, such as Rachel Corrie in 2003, Turkish Prime Minister Recep Tayyip Erdogan continues to demand an apology for Israel’s killing of Turkish citizens aboard the Mavi Marmara on May 31, 2010.

The result of that dispute is a sharp diminution in what used to be very close military ties between Turkey and Israel, not to mention a lot of ill will, which can be very corrosive over the longer run.

Regarding the events of 1967, America’s pro-Israel pundit class knows only too well that Egyptians, Turks, Syrians, Jordanians and other audiences in the Middle East will not buy Israel’s faux-history of the Six-Day War, many having been on the receiving end of it.

Thus, it is abundantly clear that the primary targets of the disinformation are Americans like those who subscribe to the neoconservative Washington Post, whose editors in recent decades have been careful to keep their readers malnourished on the thin gruel of watered-down (or unreliable) facts about the Middle East (think, Iraq’s WMDs).

So, it would be simply too much to acknowledge, as former Israeli Prime Minister Begin did 30 years ago, in an uncommon burst of hubris-tinged honesty, that Israel’s attack on its neighbors in 1967 was in no way a defensive war, or even a “pre-emptive” war (there being no really dangerous Egyptian or other threat to pre-empt).

While Prime Minister in 1982, Begin declared: “In June 1967, we had a choice. The Egyptian Army concentrations in the Sinai approaches (did) not prove that Nasser was really about to attack us. We must be honest with ourselves. We decided to attack him.”

Such real history would lift the veil now shrouding Israel’s version that plays up the “threat” posed by Egypt and disguises the grand enterprise to expand Israel’s borders and, in double-contravention of international law, to colonize the occupied territories.

To bolster Israel’s heroic rendition of the Six-Day War and to apply its supposed lessons to Israel’s current plans to bomb Iran Krauthammer reprised that triumphal version of Israel masterfully defending itself against imminent destruction by the Arabs.

“On June 5 (1967), Israel launched a preemptive strike on the Egyptian air force, then proceeded to lightning victories on three fronts,” Krauthammer wrote, cooing: “The Six-Day War is legend.”

He then overlaid that gauzy history onto today’s confrontation with Iran: “Israelis today face the greatest threat to their existence, nuclear weapons in the hands of apocalyptic mullahs publicly pledged to Israel’s annihilation, since May ’67. The world is again telling Israelis to do nothing as it looks for a way out. But if such a way is not found, as in ’67, Israelis know that they will once again have to defend themselves, by themselves.”

He wrote: “So much for the recent media hype about some great domestic resistance to Netanyahu’s hard line on Iran. Two notable retired intelligence figures were widely covered here for coming out against him. Little noted was that one had been passed over by Netanyahu to be the head of Mossad, while the other had been fired by Netanyahu as Mossad chief (hence the job opening).

“The [new] wall-to-wall coalition demonstrates Israel’s political readiness to attack, if necessary. (Its military readiness is not in doubt.) Those counseling Israeli submission, resignation or just endless patience can no longer dismiss Israel’s tough stance as the work of irredeemable right-wingers.”

After reading this Krauthammer op-ed in the May 10 Washington Post, I decided, against my better judgment, to invest a half-hour writing a letter to the editor, trying to make it as factual as possible. Several days after its submission, I have given up any meager hope I may have harbored that the Post would actually print it.

Perhaps that half-hour investment will not have been a complete waste of time if I can share the result with you:

In his May 10 op-ed column, “Echoes of ’67: Israel unites,” Charles Krauthammer refers to May 1967 as “Israel’s most fearful, desperate month” and compares it to today, claiming that Iran poses “the greatest threat” to Israel’s existence.

It ain’t necessarily so. In August 1982, then-Prime Minister Menachem Begin admitted publicly: “In June 1967, we had a choice. The Egyptian Army concentrations in the Sinai approaches (did) not prove that Nasser was really about to attack us. We must be honest with ourselves. We decided to attack him.”

Today’s “threat” from Iran is equally ephemeral. Krauthammer, though, warns ominously about “nuclear weapons in the hands of apocalyptic mullahs publicly pledged to Israel’s annihilation.”

The allusion is to an illusion, the alleged threat by Iranian President Ahmadinejad to “wipe Israel off the map.”  But he never said that, an inconvenient reality reluctantly acknowledged by Israeli Deputy Prime Minister Dan Meridor early last month. And in January, Defense Secretary Leon Panetta and his Israeli counterpart both publicly affirmed the unanimous assessment of U.S. intelligence that Iran is not working on a nuclear weapon.

Who, then, is being apocalyptic? Krauthammer’s agenda is so transparent that a rigorous Fact Check should be de rigueur.

Ray McGovern works with Tell the Word, a publishing arm of the ecumenical Church of the Saviour in inner-city Washington. He served for 30 years as an Army and CIA intelligence analyst, and in January 2003 co-founded Veteran Intelligence Professionals for Sanity (VIPS).

← Death of a Two-State Solution
Contemplating the Abyss →

14 comments for “Applying the Six-Day War to Iran”