In June 2007, Middle East expert and University of Michigan professor Juan Cole remarked that bad translations can sometimes start wars. Professor Cole, in this case, was referring to the misleading, yet widely circulated mistranslated remark by Iranian President Mahmoud Ahmadinejad during a speech in 2005 — in which he is purported to have said that Israel should be “wiped off the map.”

This old canard — long dismissed by Persian language experts as a gross distortion of Ahmadinejad’s actual words — is regularly trotted out by Israeli leaders and their supporters as proof that Iran’s regime intends genocide against Israel, thereby justifying a military attack on Iran. 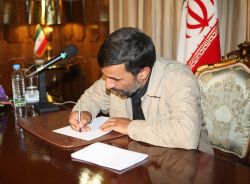 Iranian President Mahmoud Ahmadinejad at work at his desk. (Credit: Official Web Site of the President of Iran)

However, a literal translation of Ahmadinejad’s 2005 statement would be something like “this regime occupying Jerusalem must vanish from the page of time,” a reference back to an earlier statement made by Ayatollah Ruhollah Khomeini, the founder of Iran’s Islamic Republic, as Guardian columnist Jonathan Steele explained in 2006.

Ahmadinejad essentially was predicting that Israel’s rule over Jerusalem would eventually come to an end, much like the once mighty Soviet Union collapsed in the early 1990s. He and other Iranian leaders have repeated similar predictions since then, but without any suggestion that Iran would attack Israel. [For more, see “Wiped Off the Map – the Rumour of the Century” by Arash Norouzi.]

Earlier this month, Dan Meridor, Israel’s minister of intelligence and atomic energy, conceded the point in an interview with Al Jazeera. He agreed that Iranian leaders “didn’t say, ‘We’ll wipe [Israel] out,’ you’re right, but [said instead] ‘it will not survive. It is a cancerous tumor, it should be removed.’ They repeatedly said ‘Israel is not legitimate, it should not exist.'”

Though the “wiped off the map” phrase is a myth, it has been transformed into accepted wisdom in Official Washington by its endless repetition and remains a frequent refrain of U.S. politicians and the corporate media.

For instance, in an appearance last month on MSNBC, Mark Landler, the New York Times’ White House correspondent, said, “The Israelis feel the window for that [denying Iran the capability to build nuclear weapons] is closing and it’s closing really fast, and if they allow it to close without taking military action, they would find themselves in a position where the Iranians suddenly are in possession of nuclear weapons, which they’ve threatened already to use against Israel.” [Emphasis added]

The last part of Landler’s comment was an apparent reference to the Ahmadinejad misquote, with the made-up addendum that Iran has threatened to use nuclear weapons to wipe Israel off the map. In fact, Iran has not threatened to use a nuclear bomb against Israel and has even disavowed any intent of developing a nuclear bomb. [See Consortiumnews.com’s “Sloppy Comments on Iran’s ‘Nukes.’”]

Also, last month, President Barack Obama repeated the “wiped off the map” fiction in front of the American Israel Public Affairs Committee (to considerable applause), all the while assuring his audience of his preference for diplomacy in dealing with Tehran. In his speech, Obama said: “Let’s begin with a basic truth that you all understand: no Israeli government can tolerate a nuclear weapon in the hands of a regime that threatens to wipe Israel off the map.”

If President Obama were truly interested in the success of diplomatic engagement with Iran, then why would he continue to issue provocative and propagandistic lies about Iran, especially before the start of delicate negotiations between Iran and the UN P5 +1 (Security Council members plus Germany) regarding Iran’s nuclear facilities?

Loose talk and inflammatory propaganda can only cheapen the United States’ international image, inflicting preemptive harm on whatever prospects for diplomatic progress might be in the offing.

The President’s use of a discredited phrase also brings to mind the careless language depicting a “mushroom cloud” bandied about by then-National Security Adviser Condoleezza Rice as part of President George W. Bush’s effort to whip the American public into a frenzy of pro-war hysteria against Saddam Hussein’s Iraq.

The late Walter Lippman referred to such tactics as “the manufacture of consent.”   Hitler’s propaganda minister, Joseph Goebbels, called it “the Big Lie,” that is, a phrase which, if repeated often enough, would eventually pass for the truth.

Having an Iranian leader call into question the legitimacy of the Zionist system of government in Israel and predicting its eventual decline, of course, may be very insulting and offensive to the powers-that-be in Israel, but it is a far cry from a call to attack or wipe out the Israeli population.

This important nuance — acknowledged by no less than a member of the Israeli cabinet — seems to be missing from the discourse of U.S. corporate media and U.S. politicians.  Instead, Ahmadinejad’s criticism of Israel has been deliberately distorted, mistranslated and spun out of context into a physical threat against Israel, ignoring the available factual information that indicates otherwise.

Come to think of it, how did such an inaccurate phrase manage to worm its way into the text of President Obama’s speech to AIPAC? As a rule, presidential speeches are carefully reviewed by experts at the White House, National Security Council and National Intelligence Council for integrity and accuracy. After all, especially in high-profile speeches, the President’s reputation is at stake.

The intelligence officers involved in vetting a speech would have ready access to the Open Source Center’s translation of Ahmadinejad’s 2005 speech from the Persian if they had wanted to ensure the accuracy of the President’s words. Whoever allowed this piece of propaganda to slip through either committed a grave error or had a separate agenda in mind.

This episode brings to mind the criticism of former President Bush for including in his 2003 State of the Union speech a falsehood about Iraq trying to procure yellowcake uranium from Africa — a fiction that helped lead the nation into a costly war and that subsequently brought an apology from CIA Director George Tenet.

In any case, President Obama’s gaffe before AIPAC has certainly done nothing to burnish his reputation (despite the applause it received at the time) because much of the world knows better.

← Danger of Hyping Foreign Dangers
Bush Did Lie About Iraq →

40 comments for “How Obama Recycled a Lie about Iran”