Propaganda often involves taking the words of an adversary out of context and making them seem far worse or more dangerous than they are. When the news media joins in the distortion, the public can easily be stampeded into confrontation or war, a dilemma that ex-CIA analyst Paul R. Pillar addresses.

The predations of unattractive foreign rulers have long been a favorite subject of hyperbole. More recently a particular variation of that form of exaggeration has been in vogue: the assertion that a particular ruler intends “to wipe” somebody “off the map,” or sometimes “off the face of the Earth.”

French President Nicolas Sarkozy indulged in such phraseology recently when he hosted a meeting of the “Friends of Syria” coalition and urged more support for the Syrian opposition. Syrian President Bashar al-Assad, said Sarkozy, “wants to wipe Homs from the map like Gaddafi wanted to wipe Benghazi from the map.” Sarkozy is in the midst of a tough re-election fight, and hyperbole about a topic on which he has asserted a leading role is perhaps not surprising. 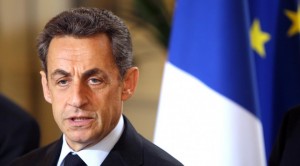 One can debate to what length massacre-wise Bashar al-Assad would be willing to go, and whether his ruthlessness would match the level of his father Hafez when in 1982 forces under the father’s regime flattened most of the town of Hama, a center of anti-regime resistance. In any event, Sarkozy’s statement did not appear to be based on any statement of intent from the current Syrian regime; it was at best an inference and projection based partly on tactics Syrian government forces already have employed.

The most questionable aspect of Sarkozy’s comment was the part about Libya. The now-widespread notion that Gaddafi wanted to wipe Benghazi off the map, with associated comments about would-be bloodbaths and massacres, appears to have originated with a comment from the late Libyan dictator in which he really said something different.

What he did say was that “we will have no mercy on them,” with the rest of his comments making it clear he was referring to armed rebels and not to the general population of Benghazi. Qaddafi went on to say that anyone who “stays at home without any weapons, whatever he did previously, he will be pardoned, protected.”

But the idea of averting a massacre had powerful appeal as the selling point for an armed intervention, for which Sarkozy and the British government of David Cameron were the prime promoters, that quickly revealed itself actually to be a regime-change operation. The notion about Gaddafi’s supposed map-wiping intentions was picked up by others, including the Obama administration, and now has become one of those myths that, simply because it has been repeated so often by so many, is widely accepted as true.

Something similar has occurred with the idea that Iranian President Mahmoud Ahmadinejad has threatened to “wipe Israel off the map.” The origin of this notion was a speech Ahmadinejad gave at a “World Without Zionism” conference in 2005.

As the Israeli minister of intelligence and atomic energy, Dan Meridor, recently acknowledged, Ahmadinejad did not say anything about map-wiping. He instead said something, in which the exact translation from Persian to English is uncertain, about how “the regime that is occupying Jerusalem must be eliminated from the pages of history.”

In the same speech Ahmadinejad went on to explain that even though the end of Israeli rule over Jerusalem may seem hard to imagine, the end of the shah’s rule in Iran and the collapse of the Soviet Union show that changes that big are possible. In this case, the myth about map-wiping has served different purposes for different parties, with the exaggerations on each side playing off one another.

Hooman Majd, an Iranian-American writer who once served as interpreter for a speech by Ahmadinejad at the United Nations, suggests that Ahmadinejad has never tried to correct the mistake about his 2005 speech because he sees political advantage in being an outspoken adversary of Israel and would not want to be seen as backing away from a bellicose statement about the Jewish state.

Leaders of the current Israeli government have repeated the wiping-out theme with gusto as part of their campaign to portray Iran as a dire threat. Defense Minister Ehud Barak, for example, earlier this year described Iran as “a nation whose leaders have set themselves a strategic goal of wiping Israel off the map.”

Anti-Iran hawks in the United States have followed suit amid debate about the Iranian nuclear program. Former presidential hopeful Michelle Bachmann went ever farther with the false assertion that Ahmadinejad “has said that if he has a nuclear weapon he will use it to wipe Israel off the face of the Earth.” [This fabrication also has popped up in comments by American pundits and journalists, including Mark Landler, White House correspondent for the New York Times.]

Even if Ahmadinejad ever said such things, to infer Iranian intentions or future actions from such rhetoric would be a serious mistake. One, because Ahmadinejad is not the principal decision-maker on how Iran uses armed force. Two, because rhetorical bombast is quite different from policy.

Ahmadinejad’s confident comments in his 2005 speech are most reminiscent of Nikita Khrushchev’s pronouncement to the capitalist West in 1956 that “we will bury you.” Fortunately, Western statesmen of the time properly interpreted Khrushchev’s comment as a boast about history being on the communists’ side, not as a statement of his government’s intention to do something horrible to the West.

Any exaggerated portrayal of a foreign problem is an impediment to well-reasoned construction of policy for dealing with the problem. The appeal of the map-wiping or Earth-face-wiping imagery seems to make such exaggeration all the more likely to catch on and harder to correct. We ought to wipe such terms out of our vocabulary except in the extremely rare instances in which intentions of outright extermination really are involved.