Israeli hardliners continue to block the compromises for a two-state solution with the Palestinians, while Jewish settlements keep expanding into land that would be part of a possible deal. Thus, the prospect for a meaningful two-state solution is dying, with dire consequences for both Arabs and Jews, writes Lawrence Davidson.

Over the past month, Palestinian leaders have begun to publicly acknowledge that continuing actions by the Israeli government, and corresponding inaction by the “international community,” have destroyed any reasonable hope of a viable and independent Palestinian state.

Listen to Ahmed Qurei, who held high office in the Palestinian Authority under Yasser Arafat: “It is probably no longer possible to create the kind of state that we want. Now we must choose between two stark choices: either we settle for a worthless state made of hapless ghettoes and miserable slums … or struggle for one unitary and democratic state where Jews and Arabs can live equally in all of Mandate Palestine.” 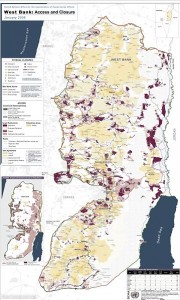 Map of Israeli settlements on the West Bank as of January 2006. (Produced by the United Nations Office for the Coordination of Humanitarian Affairs)

Among many Palestinian Islamic leaders, hope for the future now exists only in the form of a Quranic prophecy, which tells of Islam’s divinely inspired victory over the Jews in Palestine as punishment for the unholy behavior of the Israeli state. This might be compared to the Christian Zionist’s prophecy of the triumph of Israel presaging the second coming of Christ followed by God’s Judgment Day.

With either of those options — creation of a unitary secular and democratic state or God’s intervention making civil governments irrelevant — Israel as a “Jewish State” is seen as terminal. Of course, that is not how the politically minded Zionists, led by Prime Minister Benjamin Netanyahu and his Likud party, see it.

Netanyahu has recently formed a “unity” government with the major opposition party, Kadima, and by doing so appears to have secured his political leadership for some time to come. So, what sort of scenario do these Zionists seek to realize now and in the future? How do Zionist leaders see the future?

As far as I understand the situation, here is their projected scenario:

1. The Zionist leadership sees victory (Israel’s sovereign possession of all the land of Palestine from the Mediterranean to the Jordan River some even covet Jordan) as inevitable. It is just a matter of time. This assessment is based on power relations. On the one hand, the Israelis have vast military superiority over the Palestinians and have defeated all the Arab forces sent against them. On the other, they have the United States and a good portion of Europe in their political pockets. So how can they lose?

2. Victory means ethnically cleansing the land of most of the Palestinians — a process that is ongoing. Every effort is being made to force as many as possible into exile. This is being done by an ongoing policy of making life as miserable as possible for all non-Jewish natives of Israeli-controlled territory.

For instance, it is public knowledge in Israel (if not the U.S.) that “police brutality against Palestinians has been routine for decades.” Those who, despite all, refuse to leave, are being territorially restricted and economically marginalized. It is often speculated that the model for the latter situation is the Indian reservations in the U.S. as they existed circa 1870. And indeed, for Zionists this model can be more easily rationalized than the ghettos of old Europe.

In the process of this ethnic cleansing, the number of Palestinians who die is irrelevant to the Zionist leadership. The Palestinians, like the American Indians, are seen as hardly human. If the Zionists could make them all disappear without serious international repercussions they would do so.

3. All this having been accomplished, Zionist leaders plan to simply maintain the status quo and wait. They believe that, just as was the case of the American Indians, the world will eventually forget the fate of the Palestinians, and this forgetting will seal Israel’s dominion over the land. At least from the Zionist point of view, that is the end of the story.

By the way, Zionists are not the only ones betting on this sort of scenario. The Chinese in Tibet, and the Sinhalese in Sri Lanka, are also counting on the world forgetting their victims. And, in each case they might be right. However, it is the Zionists who are running the greatest risks pursuing this strategy of conquest. Why is that the case?

Problems for the Zionist Scenario

1. Israel is not a great power like China, and does not occupy a half-forgotten spot on the globe like Sri Lanka. It is very much on the map as far as vast numbers of people are concerned, both supporters and opponents. Of course, Israel continues to enjoy the patronage and protection of a great power, the U.S. But, as unlikely as it might seem at present, this can change.

2. It is not the 18th and 19th centuries anymore and outright colonial domination is no longer in favor. The only way Israel can commit crimes with impunity is by: (a) playing the Holocaust card and (b) sustaining the political clout of its lobbies.

The first practice is rapidly wearing thin almost everywhere one looks. The second, on the other hand, is the key to their patronage and protection. Yet counter-lobbies are even now evolving, and an increasingly vocal international Boycott, Divestment and Sanctions movement is emerging. The past 95 years of solid Western backing of Zionist political goals (counting from the Balfour Declaration) does not make the future a sure thing for the Israelis and their ideological supporters.

3. As the Zionists conquer Palestine, they destroy Judaism. Here is the greatest irony: ultimate success of the Zionist strategy marks the ultimate corruption of official, organized Judaism. This is so because such success seals the devil’s bargain that ties the organized aspect of this religion to the racist and anti-human goals of Zionist ideology. With the death knell of what could be a viable Palestinian state comes the death knell of official Judaism.

Do you want to know why anti-Semitism appears to be on the rise? Because the Zionists have changed the definition of the term. The traditional definition tells us that anti-Semitism is hatred for Jews as Jews. The new, Zionist-inspired definition, includes opposition to anything that the “Jewish state” of Israel does. Oppose the political goals of Zionism and you allegedly oppose Jews and Judaism. Ergo, you’re an anti-Semite.

This assertion on the part of Zionists is, of course, a modern innovation. Yet it gains popularity based on the premise laid down by Joseph Goebbels that “if you tell a lie big enough and keep repeating it, people will eventually come to believe it.”

Nonetheless, the truth is that Zionism and Israel have never been synonymous with Judaism. All Jews are not and never have been Zionists and all Zionists have never been just Jews. That being the case, the claim by Zionists that Israel and its government represent Jewry en masse is false. Yet the lie is stated over and again. The Jews who object to this false claim are now labeled “self-hating Jews.” This too is nonsense.

The most striking thing about the list of obstacles given above is that Palestinian resistance — in places like the West Bank, Gaza and Israel proper — is not on it. Why? Again, it has to do with power relations.

When, during the Second World War, local resistance manifested itself against Nazi occupation, the retaliation was disproportionately severe. Partisans might shoot a German soldier, but then the German Army would shoot 50 civilians as punishment. Nonetheless, the Germans lost the war and most of the Nazis from that time have been hunted down and given their own punishment.

The Israelis have employed the Nazi strategy of disproportionate revenge and collective punishment from the very inception of the Israeli state. If anything, the kill ratio they exact from the Palestinians is even higher than the Nazi average. But the same powers that once brought low the Nazis now either support or turn a blind eye to the savagery of the Israelis.

Under these circumstances the Palestinians have indeed been worn down. In Gaza, they are confined to the world’s largest open-air prison and in the West Bank most of their leaders are either in prison or have been turned into collaborators. It has gotten to the point where the most effective act of resistance they can muster is the threat that over a thousand of them, locked away in Israeli prisons without charge or trial, will starve themselves to death.

The death knell of the two-state solution and its corresponding corruption of official Judaism is not the end of the story. But the final chapter can no longer be written by the Palestinians alone. The West began the present horror in the “Holy Land” when it sought to pay for the sin of European anti-Semitism by allowing the destruction of the Palestinian people.

Ultimately, it is only with help from the West that the situation can be put right. However, as long as Western nations are under the corrupting influence of Zionism, most governments will not seek to do so. So this corrective effort has to be undertaken by a movement of civil society Boycott, Divestment and Sanctions.