Since the rise of Ronald Reagan in the 1980s, America’s rich have been on a roll, with their tax rates slashed by more than half and a concentration of both wealth and power at the top, a restoration of an earlier time of inequality and exploitation, as Lawrence S. Wittner recalls.

Many people might be surprised to learn that the May Day celebrations that occurred around the world Tuesday were born more than a century ago out of a struggle by American workers for the eight-hour day.

The late 19thCentury was a particularly hard and brutal time for working people in the United States. The rise of giant corporations fostered accelerated exploitation of workers in the interests of profit by the wealthy few. 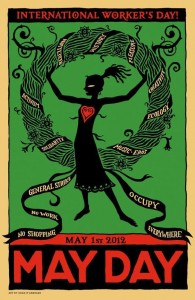 A poster for May Day 2012 from OccupyWallSt.org

In the new, giant factories, it was common for workers to labor from 60 to 80 hours a week. Many workers had a six-day workweek, but a seven-day workweek was the standard for steel mills, oil refineries, paper mills, and other highly mechanized plants.

The industrial accident and death rate soared to new heights — not only thanks to new, dangerous machines and the use of child labor, but because of worker exhaustion. In 1881 alone, an estimated 30,000 American railway workers were killed or injured on the job.

Although popular celebrations on May 1 can be traced back to pagan times, they became connected to the lives of workers as a result of these lengthy, exhausting workdays and workweeks. In the United States, a campaign to limit the workday to eight hours picked up steam in the 1880s, thanks to its backing by the Knights of Labor (a rapidly-growing labor federation), small craft unions, and left-wing supporters of the working class.

Among working people, a popular slogan swept across the country: “Eight hours for work, eight hours for rest, eight hours for what we will.” Meanwhile, the corporate titans of the era closed ranks against the eight-hour day movement, with the New York Times condemning it as “un-American.”

Gradually, plans took shape for a day of worker protests demanding the eight-hour day. And on May 1, 1886, protests erupted all across the United States, with some 340,000 workers taking part. An estimated 190,000 went out on strike.

In Chicago, a center of the eight-hour day agitation, some 80,000 workers walked off the job, with most of them joining a vast parade through the city streets. At a concluding rally, the marchers were regaled with speeches condemning the exploitation of workers by big business.

Although things passed peacefully enough during the great demonstration in Chicago, soon after that the local police launched an assault on union members by gunning down locked-out workers at the nearby McCormick Harvester Plant.

When an explosion of unknown origins went off at a subsequent protest rally at the Haymarket, a large open square in the city, police also opened fire on that worker gathering, killing some and wounding hundreds of others in what became known as the Haymarket Massacre. Radical labor agitators were arrested and blamed for the bloodshed, although most of them were not present at the rally. Four of them were executed.

Nevertheless, the march of labor was unstoppable. Although the Knights of Labor crumbled rapidly during the time of hysteria and repression that followed the Haymarket Massacre, the new American Federation of Labor vowed to continue the eight-hour day movement, and set May 1, 1890, as a day for further action.

Joining the call for May Day protests, the International Socialist Workers Congress, in 1890, helped organize May 1 parades, meetings, and rallies throughout Europe in support of the struggles of American workers. Starting in 1891, May Day demonstrations became annual events in the United States and many other countries.

Decades later, communist governments, eager to appear as champions of the working class, organized official May Day celebrations in their countries, and this, in turn, led to a falling off in support for May Day in non-communist nations. In 1958, Congress — anxious to undermine the significance of May Day as a time of worker protest — declared May 1 to be Loyalty Day, which thereby became an official U.S. holiday.

Nonetheless, the tradition of May Day as an occasion for the display of workers’ power continued in many lands and, in the post-Cold War years, began to revive in the United States. It received a major boost on May 1, 2006, when mostly Latino immigrant groups in the United States launched massive protests and strikes against anti-immigrant legislation.

And, on May 1, 2012, that tradition of protest against exploitation of workers was drawn upon by the Occupy movement, which held May Day demonstrations and rallies — often with a significant union presence — in numerous cities and towns across the United States.

Of course, the labor movement’s long and difficult campaign for the eight-hour day was won in 1938, when the Roosevelt administration — as part of its New Deal program — shepherded the Fair Labor Standards Act through Congress. This legislation made the 40-hour workweek the norm and established a minimum wage for American workers.

But, in recent decades, the drive of the wealthy to enrich themselves at the expense of the rest of society has grown considerably more intense, and certainly more flagrant. Popular anger has grown over Wall Street impunity, huge tax breaks for the rich, unlimited spending in election campaigns, corporate destruction of the environment, and the widening gap between the falling wages of workers and the rising income of corporate executives.

Therefore, it seems likely that the struggle for economic justice will heighten in coming years, with May Day continuing to serve as a potent symbol of worker discontent.

← Finally, an Afghan End Game
The Secret in the US-Afghan Deal →

3 comments for “The Rebirth of May Day’s Message”