The secret of President Obama’s strategic agreement with Afghan President Karzai is that U.S. Special Forces will continue raids to kill Taliban leaders who won’t make peace — even as the new accord is sold to the American public as an end game to the long war, Gareth Porter reports for Inter Press Service.

The optics surrounding the Barack Obama administration’s “Enduring Strategic Partnership” agreement with Afghanistan and the Memorandums of Understanding accompanying it emphasize transition to Afghan responsibility and an end to U.S. war.

But the only substantive agreement reached between the U.S. and Afghanistan – well hidden in the agreements – has been to allow powerful U.S. Special Operations Forces (SOF) to continue to carry out the unilateral night raids on private homes that are universally hated in the Pashtun zones of Afghanistan. 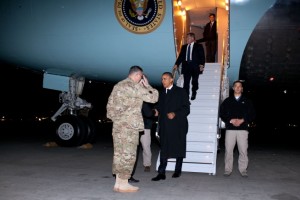 President Barack Obama arriving in Afghanistan on his May 1 trip to sign a new strategic accord with Afghan President Hamid Karzai. (White House photo by Pete Souza)

The presentation of the new agreement on a surprise trip by President Obama to Afghanistan, with a prime-time presidential address and repeated briefings for the press, allows Obama to go into a tight presidential election campaign on a platform of ending an unpopular U.S. war in Afghanistan.

It also allows President Hamid Karzai to claim he has gotten control over the SOF night raids while getting a 10-year commitment of U.S. economic support. But the actual text of the agreement and of the Memorandum of Understanding (MOU) on night raids included in it by reference will not end the U.S. war in Afghanistan, nor will they give Karzai control over night raids.

The Obama administration’s success in obscuring those facts is the real story behind the ostensible story of the agreement. Obama’s decisions on how many U.S. troops will remain in Afghanistan in 2014 and beyond and what their mission will be will only be made in a “Bilateral Security Agreement” still to be negotiated.

Although the senior officials did not provide any specific information about those negotiations in their briefings for news media, the Strategic Partnership text specifies that they are to begin the signing of the present agreement “with the goal of concluding within one year”.

That means Obama does not have to announce any decisions about stationing of U.S. forces in Afghanistan before the 2012 presidential election, allowing him to emphasize that he is getting out of
Afghanistan and sidestep the question of a long-term commitment of troops in Afghanistan.

The Bilateral Security Agreement will supersede the 2003 “Status of Forces” agreement with Afghanistan, according to the text. That agreement gives U.S. troops in Afghanistan immunity from prosecution and imposes no limitations on U.S. forces in regard to military bases or operations.

Last month’s Memorandum of Understanding (MOU) on night raids was forced on the United States by Karzai’s repeated threat to refuse to sign a partnership agreement unless the United States gave his government control over any raids on people’s homes. Karzai’s insistence on ending U.S. unilateral night raids and detention of Afghans had held up the agreement on Strategic Partnership for months.

But Karzai’s demand put him in direct conflict with the interests of one of the most influential elements of the U.S. military: the SOF. Under Gen. Stanley A. McChrystal and Gen. David Petraeus, U.S. war strategy in Afghanistan came to depend heavily on the purported effectiveness of night raids carried out by SOF units in weakening the Taliban insurgency.

CENTCOM officials refused to go along with ending the night raids or giving the Afghan government control over them, as IPS reported last February. The two sides tried for weeks to craft an agreement that Karzai could cite as meeting his demand but that would actually change very little.

In the end, however, it was Karzai who had to give in. What was done to disguise that fact represents a new level of ingenuity in misrepresenting the actual significance of an international agreement involving U.S. military operations.

The MOU was covered by cable news as a sea change in the conduct of military operations. CNN, for example, called it a “landmark deal” that “affords Afghan authorities an effective veto over controversial
special operations raids.” But a closer reading of the text of the MOU as well as comments on by U.S. military officials indicate that it represents little, if any, substantive change from the status quo.

The agreement was negotiated between the U.S. military command in Kabul and Afghan Ministry of Defence, and lawyers for the U.S. military introduced a key provision that fundamentally changed the
significance of the rest of the text.

In the first paragraph under the definition of terms, the MOU says, “For the purpose of this Memorandum of Understanding (MoU), special operations are operations approved by the Afghan Operational Coordination Group (OCG) and conducted by Afghan Forces with support from U.S. Forces in accordance with Afghan laws.”

But Pentagon spokesman John Kirby told reporters flatly on April 9 that Karzai would not have a veto over night raids. “It’s not about the U.S. ceding responsibility to the Afghans,” he said. Kirby would not comment on whether those SOF units which operated independently of Afghan units would be affected by the MOU, thus confirming by implication that they would not.

Kirby explained that the agreement had merely “codified” what had already been done since December 2011, which was that Afghan Special Forces were in the lead on most night raids. That meant that they would undertake searches within the compound. The U.S. forces have continued, however, to capture or kill Afghans in those raids.

The disparity between the reality of the agreement and the optics created by administration press briefings recalls Obama’s declarations in 2009 and 2010 on the withdrawal of U.S. combat troops from Iraq and an end to the U.S. war there, and the reality that combat units remained in Iraq and continued to fight long after the Sept. 1, 2010, deadline Obama had set for withdrawal had passed. Fifty-eight U.S. servicemen were killed in Iraq after that deadline in 2010 and 2011.

But there is a fundamental difference between the two exercises in shaping media coverage and public perceptions: the Iraq withdrawal agreement of 2008 made it politically difficult, if not impossible, for the Iraqi government to keep U.S. troops in Iraq beyond 2011 (when U.S. troops finally left).

Obama had hoped to lure the Taliban leadership into peace talks that would make it easier to sell the idea that he is getting out of Afghanistan while continuing the war. But the Taliban didn’t cooperate.

Obama’s Kabul speech could not threaten that U.S. SOF units will continue to hunt them down in their homes until they agree to make peace with Karzai. That would have given away the secret still hidden in the U.S.-Afghan “Enduring Strategic Partnership” agreement.

But Obama must assume that the Taliban understand what the U.S. public does not: U.S. night raids will continue well beyond 2014, despite the fact that they ensure enduring hatred of U.S. and NATO troops.

Gareth Porter is an investigative historian and journalist specializing in U.S. national security policy. The paperback edition of his latest book, Perils of Dominance: Imbalance of Power and the Road to War in Vietnam, was published in 2006. [This article originally appeared at Inter Press Service.]

2 comments for “The Secret in the US-Afghan Deal”