The long U.S. war in Afghanistan is finally being wound down by an agreement that removes U.S. combat troops in 2 1/2 years but lets a small contingent of Special Forces remain. The larger reality is that the war has gone on way too long for the American and Afghan people, says ex-CIA analyst Paul R. Pillar.

Air Force One has flown halfway around the globe amid multiple reminders of how heavily American politics and misconceptions about the limits of American power continue to weigh on the conflict in Afghanistan. The U.S. military expedition there, now in its eleventh year, should have been concluded long ago. The most important accomplishments came in the first few months following the justified intervention after the 9/11 terrorist attack.

Then the mission quietly transformed into an effort to transform Afghanistan into something it politically never has been and probably never will be. As the war continued and we have increasingly worn out our welcome, we have been creating our own enemies. Mostly those enemies are called Taliban, a large proportion of whom are not warriors for extreme interpretations of sharia but instead merely Afghans who are unhappy about a number of things but mostly about foreign occupation. 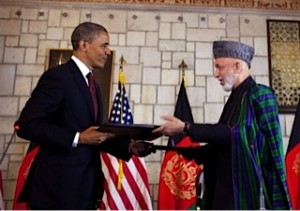 Increasingly and even more disturbingly, we have been making enemies among members of the forces to whom we will supposedly be entrusting the security of Afghanistan. These are the sources of the “green on blue” attacks, which evidently are even more numerous than we had been led to believe.

There have now been two U.S. presidential elections that have shaped policies and pronouncements about Afghanistan (the Bush administration’s preoccupation with its Iraq project meant it wasn’t paying much attention to Afghanistan in 2004). In 2008, Barack Obama’s stance on Afghanistan was partly a politically necessary balance to his laudable opposition to the Iraq War. In 2012 he cannot afford to appear blatantly inconsistent with his previous positions.

Meanwhile, the position on Afghanistan of Mr. Obama’s Republican opponent has been confused. Mitt Romney sometimes has talked about following the judgment of “the generals”, completely missing the main issue, which is not how to perform a military mission but rather whether the national interest would be served by performing that mission, with all of its associated costs, and sometimes has talked about bringing U.S. troops home as soon as possible.

But in his effort to find ways to jab at President Obama, he also has criticized the President for publicly announcing a timetable for withdrawal, raising the question of whether he has in mind a timetable to be kept secret. The president, for his part, has been leaving things somewhat vague, including in his speech at the Bagram air base, stating only that by the end of 2014 Afghans would be “fully responsible for the security of their country.”

President Obama’s trip to Afghanistan this week has some legitimate purposes, especially to thank the U.S. troops who are still there. But the timing of the trip seems to be related to the highly hyped anniversary of the killing of Osama bin Laden. The White House’s repeated reference to the raid lends credence to the Republicans’ charge that the Obama camp is milking this one event for more political points than it really deserves.

Mr. Obama does deserve credit for the decision he took a year ago, but this is a weak basis for drawing contrasts with Romney. No one knows how a President Romney would have acted if faced with the same situation. Romney’s comeback that “even Jimmy Carter” would have made the same decision doesn’t answer the question, although it does evoke thoughts of a similar decision Carter did make to undertake a risky military raid in southwest Asia. That earlier event even involved crashed helicopters.

The crash at Desert One in 1980 was severe enough to make the attempt to rescue American hostages from Iran a failure. The one at Abbottabad last year was within the capability of the SEALs to recover from it. Carter is viewed as he is today, and Obama is given the credit that he is given today, partly because of the vagaries of flying helicopters.

None of this has much to do with who is most fit to be president. The nation will be better off when it is finished both with the war in Afghanistan and with this presidential campaign.