Even as some ex-officials in Israel question the “messianic” behavior of Prime Minister Netanyahu, his hard-line American supporters are escalating a propaganda war against U.S. academics who challenge Israel’s abuse of Palestinians. One ugly smear appeared on the New York Times’ editorial page, writes Lawrence Davidson.

On April 24, the New York Times rented out part of its editorial page to the propaganda of right- wing Zionist David Horowitz, thereby taking the “newspaper of record” down into the gutter for the price of a quarter-page advertisement. The ad, which purported to be “a public service” by the David Horowitz Freedom Center, told the following libelous story:

“The Holocaust began with boycotts of Jewish stores and ended with death camps. The calls for a new Holocaust can be heard throughout the Middle East and Europe as well. In the wake of the murders of a rabbi and three children in Toulouse, it is time for the supporters of the Boycott, Divest and Sanction Israel movement (BDS) to ask themselves what they did to contribute to the atmosphere of hate that spawned these and other murders of Jews.” 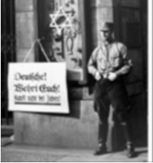 What is wrong with this story?

1. The analogy of BDS with Nazi-led “boycotts of Jewish stores” is (no doubt purposely) misleading. The Boycott movement is directed against Israel as a racist state and the economic and social agents (Jewish and non-Jewish) who support it. The notion that the BDS boycotts lead to death camps is fantasy. Whatever the crazy logic of the Nazis on the one hand and David Horowitz on the other, the BDS movement is an effort to prevent persecution of innocent people and not to promote it.

2. The notion that the BDS movement either “calls for a new Holocaust” or is associated with those supposedly doing so is nonsense. In reality, it is the right-wing Israeli fanatics who are calling for, and actually carrying out, their own small-scale version of a holocaust against the Palestinians, who have been forced into ghettos and Bantustans and who suffer homelessness, cultural genocide and periodic pogroms.

Indeed, the same week Mr. Horowitz placed his ad, Israel launched 57 military raids into Palestinian territory resulting in multiple injuries and death, destroyed at least 13 Palestinian shelters while beginning construction on 20 illegal settler houses. Yet the perpetrators of these crimes persist in portraying themselves as victims because once, under completely different historical circumstances, their ancestors were victims. But that was in the past. In the present the Zionists are the culprits and BDS movement seeks to bring out this tragic and ironic fact.

3. It is a gross misrepresentation to accuse those supporting BDS of contributing to “the atmosphere of hate that spawned … murder of Jews.” The BDS campaign has nothing to do with this atmosphere, but the actions of the Israeli leadership has everything to do with it. With the Zionist persecution of the Palestinians ongoing, one does not need a boycott movement to explain the upswing of anger.

However, they refuse to look. Instead they attempt to confuse matters and shift the blame from fanatic Zionist settlers and racist Israeli politicians onto those who would publicly expose the viciousness of Israeli policies. That is one of the aims of the Horowitz ad in the New York Times and it pursues it in very specific ad hominem fashion, singling out 14 academics by name.

When in November 1938 the Nazis launched the pogroms which became known as Kristallnacht, they painted Jewish stars on the sites to be attacked. In a similar way, Horowitz seeks to identify and label those he wishes to be “publicly shamed and condemned.” What does that mean? Should they lose their jobs just like the Jews who were forced out of their occupations by the Nazis? Should they be segregated out and impoverished like Palestinians? Perhaps Mr. Horowitz would applaud physical attacks? Just how Nazi-like does he wish the situation to get?

William Thomson of the University of Michigan, one of 14 academics slandered by the Horowitz advertisement, notes that “groups and individuals will resort to unfounded character assassination and ad hominem attacks when reasoned discussion is beyond their abilities.” However, the country’s major national newspaper is not supposed to be an accomplice in such attacks. Yet, that is the case.

Ali Abunimah has pointed out that the New York Times has “advertising acceptability guidelines” which require advertisements to “comply with its (the NYT’s) standards of decency and dignity” and not be “misleading, inaccurate or fraudulent.” Horowitz’s offering is blatantly all of this.

Yet there it was, in the April 24 edition of the “paper of record.” Horowitz’s propaganda was placed on the editorial page and not identified as an ad. What are we to make of this? It seems clear that the editors actually believe that the piece meets their standards of acceptability. But is the Times also telling us that this libel is an acceptable editorial? The entire affair calls into question (not for the first time) the judgment of the people who run this famous newspaper.

David Horowitz probably wrote this propaganda piece not only to shift blame but also to scare people to frighten those named and scare off others from getting involved in the BDS movement. Yet he may well have overstepped and made himself the subject of critical attention rather than those he rails against.

That is what happens when your message reflects a viewpoint that is ideologically driven and fanatical. Cast this viewpoint in a more normal light and it looks weird and distorted.

The 19th century British essayist William Hazlitt once remarked that prejudice can only be convincing when it can pass itself off as reason. This is Horowitz’s rather gross effort to do just that. But identifying those opposed to Israeli behavior with Nazis is wildly unreasonable. Hopefully, at this stage of the Israeli-Palestinian conflict, most Americans recognize this to be so.

← About the bin Laden Anniversary
Some Israelis Resist Netanyahu →

12 comments for “Slandering Critics of Israel”