This week, there will be plenty of retrospectives on the U.S. Special Forces raid into Pakistan a year ago to kill al-Qaeda leader Osama bin Laden. But the focus on that one attack and one  man may obscure the larger threat from the brand of terrorism that bin Laden represented, says ex-CIA analyst Paul R. Pillar.

Anniversaries tend to be used to sell things, and not just greeting cards. Many authors of books or prospective books, for instance, evidently have contemplated calendars carefully enough to have their works released near the tenth, hundredth or Xth anniversary of an event relevant to their subject matter.

Now, we are about to mark the first anniversary of the raid that killed Osama bin Laden, which will be the occasion for selling both commentary and political points. Democrats will repeatedly note that bin Laden was eliminated on President Obama’s watch, and Republicans will repeatedly argue that the president is trying to milk that one event to divert attention from what they contend are weaknesses elsewhere on his record. 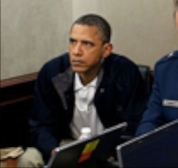 President Barack Obama in the Situation Room on May 1, 2011, monitoring the raid that killed Osama bin Laden. (From White House photo)

Terrorism-related anniversaries are usually thought to have more substantive significance than this, in the sense that they are occasions that terrorists may attempt to mark with more terrorism. We thus hear that in anticipation of next month’s anniversary, the U.S. government is bracing for possible attacks to avenge bin Laden’s death.

Such attacks cannot be ruled out, and there no doubt are groups that would like to get the added attention and perhaps satisfaction from staging them. But anniversaries tend to have much less influence on terrorists’ planning than do operational opportunities, and the added governmental and public awareness on anniversaries may actually make them among the less opportune times to attempt an attack.

Excessive public focus on terrorist anniversaries is one more manifestation of a general tendency to over-interpret terrorists’ targets and tactics as well as their timing, all of which are more the product of tactical opportunities than of strategic grand designs.

The dwelling, even in death, on this one man, bin Laden, reflects another distortion in common understanding about contemporary terrorism. We Americans like to perceive our enemies as named, discrete individuals or entities, not diffuse phenomena, even though a diffuse phenomenon is the shape that current terrorist threats, and even just radical Sunni terrorist threats, take.

The habitually loose and broad use of the name “al-Qaeda” tends to reify something that does not exist: viz., a single radical Sunni terrorist organization with a global span of operations.

As early as the late 1990s, well before 9/11, the counterterrorist focus on bin Laden personally had become strong and sharp. Also that early, some U.S. officials came to realize that the heavy attention to this one man tended to serve some of his own purposes by elevating his stature. But we were never able to get away from that sort of attention, and we are still serving some of bin Laden’s purposes by continuing to dwell on him.

7 comments for “About the bin Laden Anniversary”