Exclusive: German poet Gunter Grass is under withering attack for writing a poem that urges Germany to stop supplying nuclear submarines to Israel, objects to Israel’s threat of war against Iran and suggests both countries accept nuclear inspectors. That last idea has opened Grass to charges of “moral equivalence,” notes Robert Parry.

I first encountered concerns about my tendency toward “moral equivalence” in the early 1980s when as an Associated Press reporter I interviewed Elliott Abrams, then an up-and-coming neoconservative appointed by Ronald Reagan to be the assistant secretary of state for human rights.

At an informal get-to-know-you meeting, I asked Abrams why he so heartily denounced Nicaragua’s Sandinista government for imposing restrictions on the opposition newspaper, La Prensa,while quieting U.S. condemnations of El Salvador’s right-wing military regime for slaughtering thousands of students, labor leaders, clergy, peasants and other dissidents. 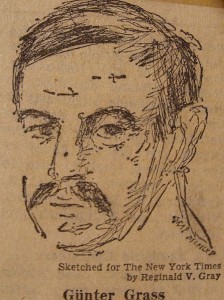 At that time, there were far more violent human rights abuses occurring in El Salvador (and Guatemala) than in Nicaragua, but the Reagan administration was putting the squeeze on the Sandinistas and letting up on the region’s right-wing killers.

Abrams looked at me askance and cautioned that I was edging close to the error of “moral equivalence” that is applying a common human rights standard to pro-U.S. and anti-U.S. countries. Abrams explained that the actions of “totalitarian” states like Sandinista-ruled Nicaragua and “authoritarian” regimes like El Salvador should not be viewed on the same plane.

Abrams’s thinking fit with the then-in-vogue theory of Reagan’s UN Ambassador Jeane Kirkpatrick who held that while right-wing “authoritarian” states could reform, left-wing “totalitarian” states could only be stopped through violent regime change. Therefore, leftist offenses were more grievous than right-wing ones, even if less overtly brutal.

Under this so-called Kirkpatrick Doctrine, Abrams saw the Sandinistas, who were  restricting La Prensa which they correctly suspected of aiding a U.S. “destabilization” campaign as far worse human rights violators than El Salvador’s military rulers, though the bodies were piling up in El Salvador, not Nicaragua.

But the problem for me as a journalist, committed to the principle of objectivity (or evenhandedness), was that I wouldn’t apply an obvious double standard playing up non-violent political violations in states opposed by the U.S. government while downplaying brutal human rights crimes in “allied” countries.

Many of my mainstream journalistic colleagues proved to be much more flexible in adapting to the Reagan administration’s edicts on “moral equivalence.” It worked out well for many careers. (By the end of the 1980s, the Kirkpatrick Doctrine would be proven false as formerly communist states peacefully evolved into democracies.)

Those memories about my alleged “moral equivalence” flooded back to me this week when I read the press coverage of a nasty dispute in which Israeli leaders launched an all-out P.R. assault against 84-year-old German poet Gunter Grass for writing a brief poem, “What Must Be Said,” criticizing Israeli war threats against Iran.

Israeli Prime Minister Benjamin Netanyahu denounced the writer’s “shameful moral equivalence between Israel and Iran, a regime that denies the Holocaust and threatens to annihilate Israel.” Netanyahu’s “moral equivalence” theme was echoed in the news columns of the New York Times, which accused Grass of “placing Israel and Iran on the same moral plane,” and by German officials.

“Putting Israel and Iran on the same moral level is not ingenious but absurd,” declared German Foreign Minister Guido Westerwelle.

But what exactly had Grass said in that regard? I went looking for an English translation of the actual poem (since German had been my worst class in college). I found an unofficial translation from the Associated Press which is reprinted below. I was struck by how tendentious the attacks had been on Grass’s supposed moral equivalence toward Israel and Iran. That portion of the poem simply says both Iran and Israel should admit international inspectors to examine their nuclear programs.

Grass recommends that “an unhindered and permanent control of the Israeli nuclear potential and the Iranian nuclear sites be authorized through an international agency by the governments of both countries.” In other words, Grass apparently believes that international law should apply to both Iran and Israel, an offense that the Times depicts as “placing Israel and Iran on the same moral plane.”

The issue of Israel’s undeclared nuclear arsenal has been a sensitive almost unmentionable topic in the U.S. press as Israel ratchets up war threats against Iran for allegedly harboring ambitions to build a nuclear bomb (although its leaders have disavowed such an interest and have let in international inspectors to check).

But Gunter Grass is now being turned into a global pariah for suggesting that Israel and Iran should live under the same set of rules. Egad! Moral equivalence!

Like others who have dared to criticize aggressive Israeli policies toward Palestinians and other Muslims, Grass also is facing hyperbolic denunciations and ad hominem attacks, including references to his brief service at the end of World War II as a 17-year-old German assigned to the Waffen SS.

Grass had tried to join the German navy but was pressed instead into the Waffen SS, which the Nuremberg Tribunals later declared guilty of war crimes although absolving 17- and 18-year-olds, like Grass, who were forced into this military arm of the Nazi Party at the end of the war.

Still, Israel’s Interior Minister Eli Yishai referred to that distant piece of Grass’s personal history in announcing Israel’s decision to ban Grass from the country. “Grass’s poem fans the flames of hatred against Israel and the Israeli people, thus promoting the idea he was part of when he donned an SS uniform,” Yishai said.

The heated debate that has swirled around Grass has increasingly ignored what the Nobel Laureate actually wrote, focusing instead on whether he’s an anti-Semite or simply an eccentric old poet long past his prime. The Times article about Israel banning Grass was typical because it picked up the attack themes against the poet without quoting from his poem.

While ignoring Grass’s actual words, the Times article by Ethan Bronner and Nicholas Kulish from Jerusalem summarized the poem in the most negative terms, accusing Grass of “echoing language and themes that have long stirred anti-Semitism.”

But the Times offered no examples of these alleged offenses beyond the poet’s supposed crime of suggesting an equivalence between Israel and Iran regarding international law being applied to both countries’ nuclear programs.

Here is the translation of Grass’s controversial poem, “What Must Be Said”:

Why do I stay silent, conceal for too long

What is obvious and has been

Practiced in war games, at the end of which we as survivors

Are at best footnotes.

It is the alleged right to the first strike

That could annihilate the Iranian people_

Subjugated by a loud-mouth

And guided to organized jubilation_

Because in their sphere of power,

It is suspected, a nuclear bomb is being built.

Yet why do I forbid myself

To name that other country

In which, for years, even if secretly,

There has been a growing nuclear potential at hand

But beyond control, because not accessible to inspections?

The universal concealment of these facts,

To which my silence subordinated itself,

I sense as an incriminating lie

And coercion–the punishment is promised

As soon as it is ignored;

The verdict of “anti-Semitism” is familiar.

Now, though, because in my country

Which time and again has sought and confronted

Its very own crimes

That is without comparison

In turn on a purely commercial basis, if also

With nimble lips calling it a reparation, declares

A further U-boat should be delivered to Israel,

Of a single atomic bomb is unproven,

But fear wishes to be of conclusive evidence,

I say what must be said.

But why have I stayed silent until now?

Because I thought my origin,

Afflicted by a stain never to be expunged

Forbade this fact as pronounced truth

To be told to the nation of Israel, to which I am bound

And wish to stay bound.

Why do I say only now,

Aged and with my last ink,

Because it must be said

What even tomorrow may be too late to say;

Could become suppliers to a crime

That is foreseeable, wherefore our complicity

Could not be redeemed through any of the usual excuses.

And granted: I am silent no longer

Because I am tired of the West’s hypocrisy;

In addition to which it is to be hoped

That this will free many from silence,

Appeal to the perpetrator of the recognizable danger

To renounce violence and

That an unhindered and permanent control

Of the Israeli nuclear potential

And the Iranian nuclear sites

Be authorized through an international agency

By the governments of both countries.

Only this way are all, the Israelis and Palestinians,

Even more, all people, that in this

Live cheek by jowl among enemies,

And also us, to be helped.

← Who Pays for Journalism?
US Signals a Hard Line in Iran Talks →