Exclusive: The negative tone of the Republicans on the U.S. Supreme Court suggests that the Affordable Care Act, with its individual mandate to buy health insurance, may be overturned as “unconstitutional” by a partisan 5-4 vote. But key Founders had a less hostile view toward mandates in 1792, as Robert Parry reports.

If Fox News and Antonin Scalia were around in 1792 when James Madison and George Washington helped push through the Militia Acts requiring citizens to buy muskets and other military supplies, those Founders likely would have heard complaints like: “What else will the federal government do? Make us buy broccoli?”

Okay, broccoli wasn’t really grown in the United States at the time, arriving in the next century with waves of Italian immigrants. But the distinction between the founding era and today is illustrative of how the seriousness of American politics has eroded. 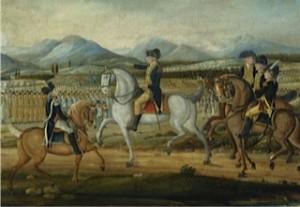 Painting of President George Washington reviewing militia troops sent to put down the Whiskey Rebellion in Western Pennsylvania in 1794.

In 1792, just four years after ratification of the U.S. Constitution, Madison and Washington two key Framers of the document saw nothing wrong with mandating Americans to buy certain products in the private market. It was simply a practical way for the government to arm militias to put down insurrections and defend against foreign enemies.

The debate also was influenced by the false assertion that never before in U.S. history had the federal government required Americans to buy a private product. For “originalists” like Justice Scalia that was particularly important because he claims to believe that only actions reflective of the Framers’ original vision can be constitutional.

But here was a stubborn historical fact, that Madison, as a member of the Second Congress, and Washington, as the first President, had supported the Militia Acts of 1792, which gave each able-bodied white male of fighting age six months to “provide himself with a good musket or firelock, a sufficient bayonet and belt, two spare flints, and a knapsack, a pouch, with a box therein, to contain not less than twenty four cartridges, suited to the bore of his musket or firelock, each cartridge to contain a proper quantity of powder and ball.”

Yes, I know that the law was passed under Article Two powers of the Executive, which makes the President the Commander in Chief of the military, not Article One’s Commerce Clause, which grants Congress unrestricted power to regulate interstate commerce. But the principle is the same, that the government can order Americans to buy something that Congress deemed necessary for the country’s good.

I’m also aware that the musket precedent is dismissed by some because it was so long ago. But that should be exactly the point when Scalia and the other Republican justices are weighing the constitutionality of the health insurance mandate.

The fact that the musket mandate was approved just four years after the Constitution’s ratification should count even more for the “originalists” like Scalia than if some mandate had been approved later.

Unlike the petty partisans of today, the Framers of the Constitution were mostly pragmatic individuals. Sure, they cared about liberty (at least for white males), but they also were driven by the need to build a strong nation that could maintain its independence against the encroachment of European powers.

That was why Madison proposed the strong Commerce Clause in the first place. He understood that only national action and coordination could enable the United States to marshal its resources properly and fend off Europe’s predatory economic tactics.

Madison’s Commerce Clause idea even predated the Constitution. He initially proposed giving the federal government control over national commerce when the Articles of Confederation were still governing the country (from 1777 to 1787).

General Washington, who hated the Articles because they had created a weak central government that often left his troops unpaid and unfed, backed Madison’s proposal when it was before the Virginia Legislature after the Revolutionary War. In a letter, Washington expressed the need for greater national unity.

“The [commerce] proposition in my opinion is so self evident that I confess I am at a loss to discover wherein lies the weight of the objection to the measure,” Washington wrote. “We are either a united people, or we are not. If the former, let us, in all matters of a general concern act as a nation, which have national objects to promote, and a national character to support. If we are not, let us no longer act a farce by pretending it to be.”

Madison failed in his bid to attach his commerce amendment to the Articles, but he revived the idea when the Constitutional Convention convened in Philadelphia in 1787. Though the convention was supposed to simply propose changes to the Articles, Madison and Washington engineered the scrapping of the earlier system to be replaced with an entirely new Constitution.

There at the Start

So, on the first day of substantive debate  May 29, 1787 as a fellow Virginian, Edmund Randolph, presented Madison’s constitutional framework, the Commerce Clause was there.

Madison’s convention notes recount Randolph saying that “there were many advantages, which the U. S. might acquire, which were not attainable under the confederation such as a productive impost [or tax] counteraction of the commercial regulations of other nations pushing of commerce ad libitum &c &c.”

In other words, the Founders at their most “originalist” moment understood the value of the federal government taking action to negate the commercial advantages of other countries and to take steps for “pushing of [American] commerce.” The “ad libitum &c &c” notation suggests that Randolph provided other examples off the top of his head.

So, Madison and other key Framers recognized that a legitimate role of Congress was to ensure that the nation could match up against other countries economically and could address problems impeding the nation’s economic success.

After the Convention, when the proposed Constitution was under fire from Anti-Federalists who favored retaining the states-rights orientation of the Articles of Confederation, Madison returned, in the Federalist Papers, to arguing the value of the Commerce Clause.

Ironically, Madison considered the Commerce Clause one of the least controversial elements of his new governing structure. In Federalist Paper No. 45, writing under the pseudonym Publius, Madison referred to the Commerce Clause as “a new power; but an addition which few oppose, and from which no apprehensions are entertained.”

In Federalist Paper No. 14, Madison explained how the Commerce Clause could help the young nation overcome some of its problems with communications and access to interior lands.

“[T]he union will be daily facilitated by new improvements,” Madison wrote. “Roads will everywhere be shortened, and kept in better order; accommodations for travelers will be multiplied and meliorated; an interior navigation on our eastern side will be opened throughout, or nearly throughout the whole extent of the Thirteen States.

“The communication between the western and Atlantic districts, and between different parts of each, will be rendered more and more easy by those numerous canals with which the beneficence of nature has intersected our country, and which art finds it so little difficult to connect and complete.”

The building of canals, as an argument in support of the Commerce Clause and the Constitution, further reflects the pragmatic and commercial attitudes of key Founders. In 1785, two years before the Constitutional Convention, George Washington established the Potowmack Company, which began digging canals to extend navigable waterways westward where he and other Founders had invested in Ohio and other undeveloped lands.

Thus, the idea of involving the central government in major economic projects a government-business partnership to create jobs and profits was there from the beginning. Madison, Washington and other early American leaders saw the Constitution as creating a dynamic system so the young country could grow and compete with rival economies. [See Consortiumnews.com’s “Did the Founders Hate Government?“]

In that sense, the Affordable Care Act comports with the original intent of the Commerce Clause, to keep U.S. industry competitive with international rivals. Today, one of the heaviest burdens on U.S. companies in relation to foreign competitors is the soaring cost of health care that has made American products more expensive.

The Constitution also explicitly empowers the federal government “to promote the general Welfare” and when tens of millions of Americans are without affordable health care and tens of thousands are dying each year because they can’t afford to see a doctor, that is surely an impediment to “the general Welfare.”

But what is perhaps most striking when comparing the founding era of the United States to today’s politicized and petty times is the stunning loss of pragmatism and common sense.

Then, the Founders were finding ways to do what was necessary to build the nation. Now, partisans like Scalia and Fox News are all about scoring debating points. They conjure up arguments to win for the GOP side even if the nation loses.

Today’s Republican partisans, including justices on the Supreme Court, denounce the health-insurance mandate even though it was originally a conservative proposal from the Heritage Foundation. Yet, once a Democratic president embraced it, the individual mandate became a socialistic affront to the Constitution.

One might reflect upon Washington’s letter supporting Madison’s commerce idea: “We are either a united people, or we are not. If the former, let us, in all matters of a general concern act as a nation, which have national objects to promote, and a national character to support. If we are not, let us no longer act a farce by pretending it to be.”

14 comments for “The Founders’ ‘Musket Mandate’”