Israeli hardliners and American neocons say U.S. and Israeli interests are one and the same, meaning that if Israel bombs Iran, the United States should join in. But other observers say Washington must create some distance from Israel’s messianic Prime Minister Benjamin Netanyahu, notes ex-CIA analyst Paul R. Pillar.

We have a comparative lull at the moment in what has been saturation attention to Iran and its nuclear program. The lull comes after the concentrated warmongering rhetoric associated with the recent visit of Israeli Prime Minister Benjamin Netanyahu and the AIPAC conference in Washington, and before the opening in mid-April of the only channel offering a way out of the impasse associated with the Iranian nuclear issue: direct negotiations between Iran and the powers known as the P5+1.

It is a good time to reflect on how much the handling of this issue underscores the gulf between Israeli policies and U.S. interests. The gulf exists for two reasons. One is that the Netanyahu government’s policies reflect only a rightist slice of the Israeli political spectrum, with which many Israelis disagree and which is contrary to broader and longer-term interests of Israel itself. 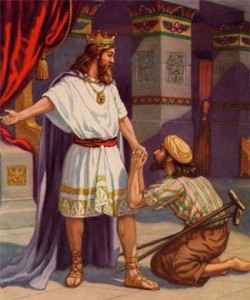 Portrayal of Israelite King David and a beggar

The other reason is that even broadly defined Israeli interests will never be congruent with U.S. interests. This should hardly be surprising. There is no reason to expect the interests of the world superpower to align with those of any of the parties to a regional dispute involving old ethnically or religiously based claims to land.

An article by Ethan Bronner in the New York Times addresses one of the drivers behind the Israeli policy: a historically based obsession of Mr. Netanyahu, for whom an Iranian nuclear weapon would be, as Bronner puts it, “the 21st-century equivalent of the Nazi war machine and the Spanish Inquisition.”

The extent to which the issue is a personal compulsion of Netanyahu is reflected in estimates that even within his own cabinet (and even with the support of Defense Minister Ehud Barak), a vote in favor of war with Iran might be as close as eight to six.

A former Likud activist who has become a critic of Netanyahu explains, “Bibi is a messianist. He believes with all his soul and every last molecule of his being that he, I don’t quite know how to express it, is King David.”

It is not in a superpower’s interest to get sucked into projects of someone with a King David complex.

Given, as several Israelis who have been senior figures in the country’s security establishment have noted, that an Iranian nuclear weapon would not pose an existential threat to Israel, one has to look to other reasons for the Israeli agitation about the Iranian nuclear program.

Besides Netanyahu’s personal obsession, there are the broader Israeli fears and emotions, the desire to maintain a regional nuclear-weapons monopoly and the distraction that the Iran issue provides from outside attention to the Palestinians’ lack of popular sovereignty.

Columnist Richard Cohen, in a recent piece that is clearly sympathetic to Israel, mentions one more reason: a desire to stem a brain drain to the United States of Israelis who would rather live in a more secure place. Clearly there is no congruence with U.S. interests here. In fact, taking in the talent that is found among the Israeli Ã©migrÃ©s is a net plus for the United States and the U.S. economy.

The Iranian nuclear issue only reconfirms the non-congruence of U.S. and Israeli interests that should have been apparent from other issues. Most of those issues revolve around the continued Israeli occupation and colonization of disputed land inhabited by Palestinians. The United States has no positive interest in Israel clinging to that land, only the negative interest involving the opprobrium and anger directed at it for being so closely associated with Israeli policies and actions.

Another reminder of the lonely position in which the United States finds itself almost every time it automatically condones Israeli behavior came last month when the United Nations Human Rights Council voted for an inquiry into how Israeli settlements in the occupied territories affect the rights of Palestinians. Initiation of the inquiry was approved with 36 votes in favor, ten abstentions and a single no vote by the United States.

If the United States escapes a war with Iran by achieving success in negotiations (which Netanyahu and his government have in effect denounced and have helped to subvert by waging a covert war against Iran), Americans ought to reflect on how close they came to disaster by following the man who thinks he is King David.

If it does not escape a war, it will be hard to find any silver lining in the consequences. But perhaps one would be that Americans would then be more likely to understand how contrary to their own interests it has been to follow the preferences of the Israeli government. Perhaps that could be a first step toward a more normal, and more beneficial for the United States, U.S. relationship with Israel.

← The Founders’ ‘Musket Mandate’
Is Bibi Bluffing on Iran? →