Exclusive: “The Hunger Games” based on a trilogy of best-selling novels about an apocalyptic future set box-office records for a non-sequel film on an opening weekend, but Lisa Pease also found the film’s story compelling enough to leave her hungry for more.

Even if you never read the book, you can still enjoy “The Hunger Games.” That said, it seemed clear to me that for this film, the more you know about the story and characters in advance, the more you would enjoy it.

In the movie, some incidents and people were only hinted at or alluded to, leaving those of us who have not read the book without the appropriate context to fully appreciate or understand the significance of certain characters or events. However, I was thoroughly engaged in the story throughout, and am very curious to find out not only what happens next, but what happened previously. 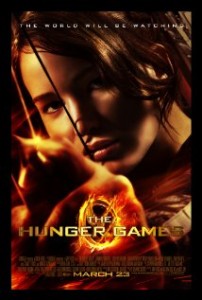 Poster for “The Hunger Games”

I’m hoping a future film will delve more into the causes of the rebellion, the meaning of a certain gesture that throngs of people made at a couple of  points during the film, and how the games came into being in the first place, something only hastily sketched in the film.

The story opens with a not-so-unbelievable premise: Every year, Panem, a totalitarian regime, holds “The Hunger Games” a reality game show in which children from each of 12 districts, which had participated in a rebellion many years earlier, are sent to compete in an extreme Survivor-like competition where the last person living wins.

The games are a way of providing retribution to the districts for challenging the state while also offering a small modicum of hope, because the winner of the games gets to be rich and gets all the blessings of being part of the 1 percent (or whatever the apparently small percentage of people who live lives of comfort is in Panem).

At the start of the film, 16-year-old huntress Katniss Everdean, distraught that her 12-year-old sister has been chosen to be a “Tribute,” i.e., a participant in the games, volunteers herself instead. A bow-and-arrow expert, she knows she has a far greater chance of surviving than her younger sister does. She and another young man from her district, with whom she shares a previous connection, are transported to the capital city to prepare for the games.

The first half of the film deals with the preparation for the games. The second half of the film shows the game itself. But the real game is the interaction between the players and the viewing sponsors, who have the option to parachute in necessary supplies to help favored players out of tight spots.

Katniss doesn’t have the luxury of taking the highest possible road. She has a young sister waiting for her at home, suffering in the care of an apparently inadequate mother (another of those back stories merely hinted at in the film that was surely well developed in the book). Knowing that makes Katniss’s choices during the film a little less predictable.

Similarly, the filmmakers do a good job of giving us questions at different point about Katniss’s fellow competitor from her district Peeta Mellark. Is Mellark in love with Katniss, or is he just playing a game?

I have two problems with the film, and both are significant. The story clearly has all kinds of political subtext, but it felt like whatever was in the book was deliberately stripped out in the hopes of appealing to the widest possible audience. And while that may work, that makes me a little sad, as the wisdom that the original author, Suzanne Collins, seems to have been trying to impart via fiction has apparently been lost a bit in the translation from book to screen.

My other disappointment was the ending. It felt unclimatic, predictable, and, of course, unfinished, as it necessarily is, since this is part of a series. But to the filmmakers I would suggest rewatching the first Star Wars film. You know a sequel is coming. But the film itself was a completely self-contained unit that required no additional knowledge to enjoy. This film didn’t quite meet that bar.

That said, the lead actress alone is worth the price of admission. Jennifer Lawrence, as Katniss, displays a combination of strength and vulnerability that is remarkably compelling.

Lenny Kravitz brings a mesmerizing charisma to what is, in the film version, a near lifeless character. His back story is not discussed or explored, so it’s very much to Kravitz’s credit that I still wanted to see more of his character, to learn who he was, what he knew, why he wanted what he appeared to want in the film.

Woody Harrelson does a nice turn as Katniss’s alcoholic mentor, a former game winner, who gives some cynical but sound advice on the importance of putting on a good “show” for the sponsors.

Given the extraordinary box office debut so far (over $155 million this weekend alone), it seems certain we’ll get to learn more about all of these characters and the world of the film. Part of me is tempted to run out and read the books because the world of the story seemed really interesting.

But part of me wants to experience the rest of the films (three more are planned for the story told in a trilogy of books) without knowing what happens next. We’ll see which part of me wins out between now and the next installment.