Congress finally banned its members and other federal officials from stock trading based on insider government information, but not before the law was watered down in two key respects, as Michael Winship reports.

Watching some of the news coming from Capitol Hill last week, two old music videos started buzzing around in our heads.

One was the classic “I’m Just a Bill,” from Schoolhouse Rock, in which a beleaguered piece of legislation sits outside on the marble steps hoping to someday become a law. The other was that Paula Abdul “Opposites Attract” number from 1989 with the sleazy cartoon cat and the chorus that starts, “I take two steps forward, I take two steps back.” 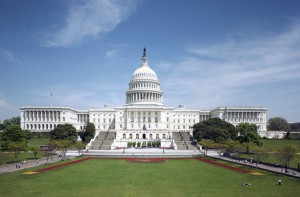 The West Front of the U.S. Capitol

Six long, weary years after New York Rep. Louise Slaughter first proposed a law to ban insider trading by members of Congress and their staffs, the Senate overwhelmingly approved the House version of the STOCK (Stop Trading on Congressional Knowledge) Act and sent it down Pennsylvania Avenue for President Obama’s signature (the legislation covers the executive branch as well). The vote was 96-3.

All it ultimately took for passage were the magic words, “60 Minutes is here to see you.” You’ll remember the blistering report by the CBS News magazine show last November implicating several members in questionable financial transactions based on private information. That’s what finally lit a fire under an already deeply unpopular Congress.

“This has been a long and turbulent debate, but one we needed to have to serve our constituents.” Rep. Slaughter said. “It is a fight I’m proud to have waged.” President Obama noted, “It’s a good first step. And in the months ahead, Congress should do even more to help fight the destructive influence of money in politics and rebuild the trust between Washington and the American people.”

But here’s the first step back. The STOCK Act lacks two key amendments that were in an earlier, tougher Senate version. One, proposed by Senator Chuck Grassley of Iowa, would have attempted to rein in the burgeoning “political intelligence” industry in D.C. As described by the congressional newspaper The Hill:

“Grassley’s language would have dramatically expanded the disclosure of lobbying activities by requiring specialists who glean valuable information from Capitol Hill to register and report their activities after making even one contact to gather political intelligence. Hedge funds and other money managers pay top dollar for the information, which can be used to make lucrative trades.”

The other amendment, from Sens. Patrick Leahy, D-Vermont, and John Cornyn, R-Texas, would, The New York Times reported, “have given prosecutors powerful new tools to propose public corruption cases.”

The non-partisan congressional watchdog group CREW took exception to the omissions, describing the passed bill as “feckless bad politics as well as policy.”

Loss of the Leahy-Cornyn amendment is especially egregious, CREW’s Jeremy Miller wrote just before final passage, as it “also amends the illegal gratuities statute to prevent public officials from accepting gifts given because of their governmental position, and makes clear public officials who accept private compensation may be subject to prosecution.”

As for the second step back, CREW published a report this week titled “Family Affair” revealing that more than half the members of the House, as reported by The Boston Globe, “paid nearly $5.6 million in salaries or fees directly to family members. In addition, House members paid $3.1 million to family businesses, employers, or associated nonprofits. More staggering is the $150 million in legislative earmarks to organizations affiliated to the congressmen and their family members.”

The report, nearly 350 pages long, was wonderingly described by the Times as “an extraordinary compendium of creative accounting, self-interested budgeting and generous expense reimbursements. It highlights common practices that translate into tens of millions of dollars in payments to relatives or the lawmakers themselves.”

Just for starters, according to the report’s executive summary:

“Three representatives, Bill Cassidy (R-LA), Jason Chaffetz (R-UT) and Tim Walz (D-MN), reimbursed themselves and their wives for babysitting costs, an expense those without access to campaign funds typically pay out of their own pockets. Reps. James Lankford (R-OK) and Adam Kinzinger (R-IL) paid themselves salaries from their campaign funds while running for office, a practice legal but uncommon. Rep. Grace Napolitano (D-CA) loaned her campaign $150,000 in 1998 and collected more than $94,000 in interest during the 2008 and 2010 election cycles alone.

“Rep. Colleen Hanabusa (D-HI) loaned her campaign $125,000 and collected more than $31,000 in interest. Rep. Paul Broun (R-GA) loaned his campaign $309,000 and has so far collected nearly $29,000 in interest despite telling the Federal Election Commission (FEC) he wouldn’t charge any interest on the loan at all.”

You’ve got to read this report to believe it, there’s everything but Paula Abdul and her sleazy cartoon cat.