For years there has been a debate over not only who Jesus was but whether he existed. Historians remain split on many Jesus-related questions and the issue is fraught with religious overtones but Rev. Howard Bess believes enough is now known about Jesus to put him in context for his (and our) times.

What can we know about Jesus? The skeptic will answer “not much” or “probably nothing” — an answer not without reason. The records with which we have to work (The New Testament) are no more than fragments coated with speculations of men who never knew him and never heard him speak.

Paul is the only New Testament writer who can be considered a contemporary of Jesus and Paul never had personal contact with Jesus. Plus, Paul’s writings are not historical reporting but rather theological speculations. The history of Christian scholarship about Jesus also is heavy with mythology and theological projections. 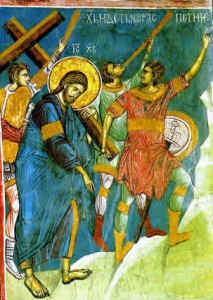 Image of Jesus bearing his cross, from a 14th Century fresco at the Visoki DeÄani monastery in Kosovo.

Yet, many Christians embrace Bible readings as fact. For centuries, with few exceptions, Christian churches and leaders focused on what they considered proper beliefs and ignored questions about the “real” Jesus.

In the early 20th Century, Albert Schweitzer made the first significant challenge to the churches’ obsession with belief over facts. In 1906, he published The Quest for the Historical Jesus, but scholars — and Schweitzer himself — later concluded that he had failed in his quest. His tools were limited and his methodology was flawed.

The difference between this third effort and the earlier attempts is that scholars have more and better tools with which to work. They also come to their task with the aid of sociologists, historians, literary critics, linguists, archaeologists and anthropologists. The result is that the life of Jesus now can be put into the context of the history, economics, religion, social norms and dominant politics of his day.

At the time of his teaching more than two millennia ago, the stories Jesus told and the content of his teachings were not kept as written records. Rather, his central teachings were preserved by oral tradition and were only written down later. The authenticity of those accounts is now being tested, placed within the known context of his public activity.

As a result of this third search for the historical Jesus, a real human being is emerging. Scholars are now willing to make a list of the “indisputable facts” of the life of Jesus. Of course, as soon as one scholar calls his list “facts,” there are other scholars who dispute the list with additions, corrections and subtractions. That is the nature of the current debates.

However, there is general agreement that there are facts about Jesus that can be ascertained by the persistent researcher, though the search for the historical Jesus is an ongoing effort and will never be complete.

The New Testament gospels will remain only a small group of snapshots, taken with an old camera with poor quality lens. However, we are getting the best look at the historical Jesus that we have ever had.

Apocalyptic thinking with anticipation of the approaching end of the world is on the wane, too. Young people are more interested in the way life should and can be lived.  Young people are living with awareness of social, political and economic dynamics. And based on the latest research, some of the facts that we now know about Jesus speak to American youth.

Jesus was an active advocate of justice for everyone. To him, justice was not understood as punishment but rather as opportunity. He found the behavior of the rich despicable. He looked on the religious leadership with disdain. Love of God was his highest virtue. Love of neighbor was a close second. He was very public with his convictions.

Jesus grew up in Galilee in northern Palestine, part of a family that was poor and faithful to the Jewish religion. In his ministry, Jesus taught in small towns, villages and the Galilean countryside, never taking his public activities to the large cities in Galilee. Then, Jesus traveled to Jerusalem to celebrate Passover. While there, he created a disturbance in the Temple, which led to a show trial and his death on a cross.

Churches teach that Jesus died for the sins of the world, a theological belief that can be believed or disbelieved. The historical fact is that Jesus was put to death because he called for religious reform and social justice.

33 comments for “Hunt for the Historical Jesus”