The “three amigos” John McCain, Joe Lieberman and Lindsey Graham are the Senate’s top war hawks, widely admired by the Washington Post’s editors and other neocon voices. But the senators also were cheerleaders for the Iraq disaster and other dubious exploits, ex-CIA analyst Paul R. Pillar recalls.

The tendentious and careless use of historical comparisons and analogies has long contributed to some of the biggest foreign-policy follies, such as the Vietnam War. Seeing a reincarnated Hitler in a two-bit dictator or a reenacted Munich in a decision to avoid a war has perhaps been the most frequent such misuse of history.

Now three U.S. senators, as described in a sympathetic puff piece by Jackson Diehl, are reaching into more recent history to argue that getting the United States involved in more wars is a good thing and that they themselves have been both courageous and insightful in taking the lead to see that this happens. 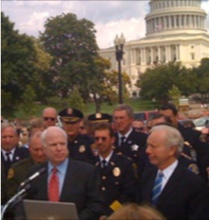 The senators, Lindsey Graham of South Carolina, Joe Lieberman of Connecticut and John McCain of Arizona, whom their staffers affectionately refer to as the “three amigos,” are most immediately interested in getting the United States involved in the civil war in Syria.

Not far behind that, they also are itching to bomb, bomb, bomb Iran, with Graham and Lieberman being lead sponsors of a Senate resolution aimed at boxing the U.S. president into doing exactly that. The amigos describe themselves as repeatedly having been on the right side of recent history by pushing for more military action in situations such as Bosnia, Kosovo, Libya and the “surge” in Iraq.

As portrayed by Diehl, the trio’s inspired, bellicose leadership keeps running up against others small-mindedly “playing their usual roles,” including the Pentagon cautioning about how tough some of the proposed combat missions are likely to be and “self-styled ‘realists’ ” pointing out how intervention in a civil conflict may only make it worse.

The amigos’ confidence remains undimmed. “We have a record of being right,” says McCain. The lesson of the recent history is quite simple, says Lieberman. “What it shows is that civil wars we get involved in can be settled more successfully than civil wars where we don’t get involved.” Would that it be that simple.

There are at least three major problems with this use of history:

One is that the situations being discussed are not at all similar. Getting Serbs to stop doing what they were doing in Bosnia or Kosovo is not at all comparable to winning a civil war against a Syrian regime that is fighting for its life and still enjoys substantial backing from domestic elements who fear the alternative.

It is a comparison not just between apples and oranges but between apples and pumpkins. Even the more recent Libyan revolt, another part of the Arab Spring, was far different from the circumstances in Syria, mostly because of the sectarian dimension in the latter country.

Second, Diehl and the amigos are too quick to declare what is the right or the wrong side of history in the recent cases they cite. Diehl states that “the consensus in Washington” is that the surge in Iraq “rescued the United States from catastrophe in Iraq and made possible the withdrawal that Obama completed as president last year.”

What consensus? Probably the only conclusion clear enough to warrant that word is that the surge contributed, along with other factors, most notably the Sunni Awakening, to a reduction in the violence in Iraq that peaked in 2006 and 2007. But the surge failed miserably to accomplish its principal declared objective, which was to facilitate political reconciliation among the contending Iraqi factions.

Many of the defense intelligentsia in Washington who have been most keenly interested in the Iraq War argued against completion of the withdrawal because of the continued bitter internal conflict in Iraq that the surge failed to resolve.

As for Libya, it is far too early to declare that intervention wise or successful given the continued instability, atrocities and division to the point of secession in that country, not to mention the terrible example set by reneging on the deal with Qaddafi under which he gave up terrorism and development of weapons of mass destruction.

Third, the history being invoked is highly selective. Nowhere in Diehl’s piece is there mention of what was by far the biggest act of military intervention that the three amigos supported. They all voted in 2002 in favor of a Congressional resolution authorizing it. That’s right: the original launching of the Iraq War, the intervention with the trillion-dollar price tag, thousands of American dead, tens of thousands of American wounded and even more Iraqis dead, along with more extensive damage to U.S. interests still being incurred.

Of course, we can’t say in that instance that the United States intervened in a civil war; in Iraq the United States precipitated a civil war. But for the amigos to say smugly that “we have a record of being right” about the application of military force while ignoring a blunder so big and so costly that it outweighs dozens of Kosovos would be, were it not for the tragic nature of the consequences of this blunder, laughable.