A decade into the Afghan War, the atrocities by U.S. forces whether accidental or intentional keep piling up along with assurances from American leaders that “this is not who we are.” But the unwillingness to impose serious penalties and the failure to adopt less violent strategies say something else to many Afghans, writes John LaForge.

A U.S. Army Staff Sergeant walked through two villages in Kandahar Province, Afghanistan, around 3 a.m. March 11, methodically shooting 16 people that he’d dragged from their beds with single shots to the head. Then he dragged corpses outside and set some on fire. Eleven were reportedly from one family. Nine were children.

The Taliban has promised revenge against “sick-minded American savages.” Secretary of Defense Leon Panetta appeared to confirm this characterization when he callously told the press later the same day, “War is hell. These kinds of events and incidents are going to take place. They’ve taken place in any war. They’re terrible events. This is not the first of those events, and they probably won’t be the last.” 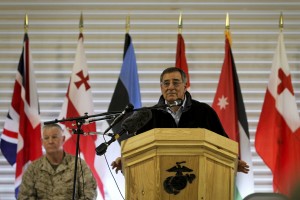 “Events” and “incidents” aren’t the pronouns that come to mind when contemplating premeditated multiple murders of sleeping women and children. Afghanistan’s President Hamid Karzai called the massacre an assassination and “an intentional killing of innocent civilians and cannot be forgiven.”

Seth Jones of the Rand Corporation, a former Special Forces Command officer in the Pentagon, tried to cement the blood-thirsty image of the U.S. at war when he said March 12 on the PBS News Hour, “This is not as out of the norm as it’s appearing in the media. Afghans are used to being killed.”

“Sick-minded American savages” clearly are not confined to the killing fields. With the long record of U.S. massacres that have gone unpunished or been treated lightly, Afghans can be forgiven for demanding that the latest Son of Uncle Sam be turned over to Afghan authorities for trial.

In late November 2001, hundreds of captured Afghan fighters were packed into sealed shipping containers and moved to the town of Mazar. Hundreds died of asphyxiation en route, were executed when some of the bodies were dumped along the way, or were killed when the containers were riddled with machine gun fire in Mazar under the watchful eyes of 30 to 40 U.S. Special Forces soldiers. The documentary, “Massacre at Mazar,” includes eyewitness accounts of the killings. No soldier has ever even faced a U.S. inquiry.

No U.S. personnel have been prosecuted for jet fighter attacks gone astray, or for bombing civilians targeted with unreliable “intel,” or for the pilotless drone massacres directed from thousands of miles away that have left scores of children dead. Eleven children ages 2 to 7 were killed last May 28; six kids were killed Nov. 24; eight more were killed Feb. 15. No charges were brought against two Marines in charge of a unit that killed 19 people and wounded 50 by firing indiscriminately at cars and bystanders in Afghanistan in 2008.

When U.S. crimes of war have been prosecuted the official trivialization of the atrocities and the lack of severe consequences have been appalling. The literate population of Afghanistan may be more attuned to the pattern than U.S. readers.

Pvt. Charles Graner, a leader of the Abu Ghraib torture cell in Iraq was released after 6 ½ years of a 10-year sentence. In 2009, charges were dropped against four U.S. military contractors from Blackwater Inc. who massacred 17 civilians in the square in Baghdad.

This year, Marine Staff Sgt. Frank Wuterich was allowed to plead guilty to “dereliction of duty,” after having overseen the cold-blooded murders of 24 sleeping civilians in Haditha, Iraq in 2005. He had told his men, “Shoot first, ask questions later.” Six of them had their charges dropped and one was acquitted. Sgt. Wuterich walked free without any jail time.

A May 31, 2011, warning from President Karzai should now be reread by the Pentagon’s generals: “If they continue their attacks on our houses, then their presence will change from a force that is fighting terrorism to a force that is fighting against the people of Afghanistan. And in that case, history shows what Afghans do with trespassers and with occupiers.”

John LaForge is on the staff of Nukewatch, a nuclear watchdog and anti-war group in Wisconsin, and edits its quarterly newsletter.

8 comments for “America’s Crimes of War”