From the Archive: HBO’s “Game Change” shows John McCain’s presidential campaign recklessly picking Alaska Gov. Sarah Palin as his running mate and then learning she lacked basic knowledge about the world. However, as Robert Parry reported in 2008, the campaign still went for the jugular against Barack Obama.

From Republicans at political rallies to GOP lawmakers on TV talk shows, McCain-Palin supporters are angry, very angry and they seem to think their anger justifies whatever they do: from calling Barack Obama a “terrorist” to shouting “kill him” and “off with his head” to getting huffy when their violent rhetoric is challenged.

They’re even angrier now after Rep. John Lewis, D-Georgia, a veteran of the civil rights movement, chastised John McCain and Sarah Palin for whipping Republican crowds up into the kind of fury that can set the stage for murder. Lewis, who marched and bled with Martin Luther King Jr., accused McCain and Palin of “sowing the seeds of hatred and division” in a way reminiscent of Alabama Gov. George Wallace, who rallied white anger against black civil rights advances in the 1960s. 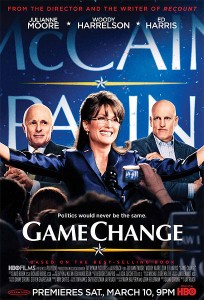 “George Wallace never threw a bomb,” Lewis said on Oct. 11, 2008. “He never fired a gun, but he created the climate and conditions that encouraged vicious attacks against innocent Americans who were simply trying to exercise their constitutional rights.”

While Lewis’s warning could have been an opportunity for McCain to reflect on the tone of his campaign, it became another excuse for him to get angry. McCain who has elicited some of the harsh crowd responses by asking ominously “who is the real Barack Obama?” denounced Lewis’s statement as “a character attack against Governor Palin and me that is shocking and beyond the pale.”

Rather than apologize for his own recklessness or, perhaps, pull a campaign ad that accused Obama of lying about his association with a “terrorist,” former Vietnam War-era radical William Ayers McCain demanded that Obama repudiate Lewis. (Obama’s campaign responded by saying Lewis was right to condemn “hateful rhetoric” at the rallies but distancing itself from the Wallace comparison.)

After McCain’s angry retort to Lewis, mainstream TV talking heads began wringing their hands that Lewis had gone too far, noting that McCain and even Palin had pulled back a bit in the Obama-bashing on Oct. 10, with McCain drawing boos himself when he offered a mild defense of Obama as “a decent family man.”

But the Republican counterattack against Lewis continued on Oct. 12 as the McCain-Palin camp got riled up for the Sunday morning news shows. Among the angry McCain-Palin surrogates was Sen. Lindsey Graham, R-South Carolina, who went on CBS’s “Face the Nation” to deplore Lewis’s criticism as “an all-time low” and “an absolute offense to people like me.”

Graham added, “We’re not going to be intimidated by this playing the race card simply because Sen. Obama’s record has been attacked in a very fair way.”

So, the Republican Party, which built its recent political dominance on what Richard Nixon called the “Southern Strategy” and which held a 2008 national convention filled with mocking references to Obama as a “community organizer,” was the real victim here. Yet another reason to get angry.

Based on the reactions to Lewis’s statement, it appeared the McCain-Palin campaign took no responsibility for the latest shout-outs about killing Obama and saw no connection between Palin’s incendiary rhetoric that Obama “pals around with terrorists” and the violent anger that was bubbling up among right-wingers.

The McCain-Palin campaign slogan may be “Country First,” but the behavior often looked like “Country Be Damned.” There seemed to be no concern about what would happen to the United States if the angry victimhood of the McCain-Palin crowd, mixed with suggestions that Obama is a closet terrorist, might encourage some nut to take a shot at Obama.

As angry as the Republicans are though they’d held the White House for eight years and dominated the Congress from 1995 to 2007 did anyone stop to think that other Americans might get angry if it was perceived that the Republicans maintained their power in 2008 through violence, racism or dirty tricks?

Did the Republicans expect a repeat of Election 2000 when they overrode Al Gore’s victory in the national popular vote, dispatched rioters to Florida to disrupt the Miami recount and then had five Republican justices of the U.S. Supreme Court hand the White House to George W. Bush while Democrats mostly sat by quietly?

In fall 2008, millions of Americans rued the day that Bush was ushered into the White House as they looked out over a wasteland of national opportunities squandered. Instead of a vibrant economy, plentiful jobs, a robust stock market, a swelling budget surplus, a nation at relative peace and worldwide admiration they saw an economy in shambles, massive job losses, a stock market in free-fall, record deficits, two open-ended wars and global disdain.

If any group had a reason to be angry, it would have been the plurality of Americans who voted for Al Gore and saw their collective judgment overturned by a partisan majority of the U.S. Supreme Court. [For details on how this happened, see our book, Neck Deep.]

Many of those Americans not only had their vote effectively nullified and their political judgment ignored but they suffered real economic damage. Some found themselves out of work while others opened statements on their retirement funds in October 2008 to find they have lost much of their life savings.

Yet, these Americans remained relatively restrained. They didn’t go to rallies and shout death threats about the Republican ticket. Nor were Barack Obama and Joe Biden whipping up crowds with accusations that their opponents were disloyal.

No, the anger was disproportionately among the Republicans. McCain and Palin turned their rallies starting with the Republican National Convention through joint appearances in October  into anti-Obama hate-fests, leading to taunts of “terrorist,” “socialist,” “traitor” as well as racial epithets, the repeated invocation of his middle name “Hussein,” and suggestions on how to eliminate him.

The anger spilled over into events connected to other races. At a Georgia Senate debate on Oct. 9, Republican partisans in the crowd booed the mention of Obama’s name and a woman yelled out, “Bomb Obama,” the Associated Press reported.

McCain and Palin stoked these fires with the inflammatory McCarthyistic tactic of exploiting Obama’s tangential association with William Ayers, who four decades ago was part of a violent anti-Vietnam War group, the Weather Underground, but who had been living a constructive life since the mid-1970s as a college professor and expert on education policy.

Obama crossed paths with Ayers when the two were put on a board for the Chicago Annenberg Challenge, a program for educational excellence launched by the staunchly Republican (and pro-McCain) Annenberg family. Though Obama’s ties to Ayers appeared to be trivial (he also hosted a tea for Obama’s first state senate race), McCain and Palin have used what lawyers would call “prejudicial” evidence, playing up minor facts that are intended to inflame a jury.

In this case, the prejudicial quality is doubled by the fact that not only was Ayers a minor figure in Obama’s early political career but that Ayers’s violent behavior occurred a couple of decades earlier. Obama, who was eight at the time and living in Hawaii, has denounced Ayers’s involvement in anti-war bombings as “despicable.”

The Obama-Ayers guilt by association was almost as crazy as suggesting that Obama palled around with violent white racists because when Obama entered the U.S. Senate in 2005 he sought advice from Sen. Robert Byrd of West Virginia, who had been a member of the Ku Klux Klan as a young man.

Similarly, one could go back through McCain’s connections to radical right-wing groups during the 1980s when he listed himself as a supporter of the U.S. Council for World Freedom, which was affiliated with the World Anti-Communist League, a haven for neo-Nazis, racialists and “death squad” operatives. Or there are Sarah Palin’s links to the Alaska Independence Party, a group whose leader has denounced the United States and advocated secession from the Union. Palin has spoken on behalf of the party, where her husband Todd was a member.

Indeed, those connections were more relevant than the Ayers’s guilt-by-association tag since they involved direct actions by the principals, not what some other person did in an earlier phase of his life. Nevertheless, the McCain-Palin ticket seized on Ayers as a central argument against Obama, using highly inflammatory words like “terrorist” and “lie” in a current TV ad. The GOP campaign also twisted an Obama comment about Afghan War strategy into a slur against American troops.

With this pattern, it was hard not to conclude that the McCain-Palin campaign was either willfully feeding red meat to its angry base as a political tactic or hoping to exacerbate doubts among white voters about an African-American candidate for President.

In either case, the American people might be more reasonably angry at John McCain and Sarah Palin for resorting to such ugly tactics and putting the nation at grave risk for their personal ambitions.

← Satellite Photos of Iran Doubted
Republicans, a Threat to the Republic? →

4 comments for “Why Are McCain Backers So Angry?”