From the Archive: As Americans watch HBO’s “Game Change” about Election 2008 and reflect on the madcap Republican presidential race of 2012 they confront again the GOP’s modern tendency to promote patently unfit individuals for high office, as Robert Parry observed in 2009 when Sarah Palin resigned as Alaska’s governor.

Sarah Palin’s abrupt decision to resign as Alaska’s governor and her rambling explanation underscored again how the Republican Party over the past dozen years has put up candidates for top national offices who are unqualified or ill-suited for those sensitive positions.

Like Palin, George W. Bush was a charismatic underachiever who hadn’t accomplished much in life and showed little intellectual firepower but was nevertheless presented by the GOP as its candidate for one of the most powerful jobs on earth. However, unlike Palin who lost her vice presidential bid, Bush took the presidency for two terms in two dubious elections with disastrous consequences for the nation. 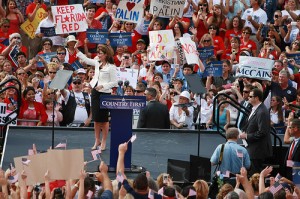 Then, even amid the wreckage of the Bush administration’s final days, the Republican Party enthusiastically nominated first-term Alaska Gov. Palin to be a heartbeat away from the presidency, which they hoped would be filled by 72-year-old cancer survivor John McCain.

The Republican Convention in St. Paul, Minnesota, was a glimpse into Crazy Town, with a national party gone giddy over the folksy Sarah Palin, who we were told could “field-dress a moose.” The dominant chant of the convention sometimes led by Palin herself was “drill, baby, drill.”

On the campaign trail, Palin tossed out the reddest of red meat, accusing Barack Obama of “palling around with terrorists” and whipping angry white crowds into anti-Obama shouts of “kill him” and “traitor.” She seemed oblivious to the demagogic passions that she was unleashing or she simply didn’t care about the possible consequences.

Palin unraveled with her simple-minded answers to simple questions during network TV interviews. In trying to burnish her foreign policy expertise she famously declared, “you can actually see Russia from land here in Alaska.” In elaborating on the point, she later said, “As Putin rears his head and comes into the air space of the United States of America, where do they go? It’s Alaska.”

As Palin flamed out, her defenders claimed that the “liberal media” was picking on her. On one radio talk show, a caller complained to me that CBS News’ anchor Katie Couric had asked Palin unfairly tough questions. I responded by noting that one of those “tough” questions was what newspapers Palin read, to which Palin couldn’t manage a coherent answer.

By the end of Campaign 2008, most American voters had concluded that Palin was simply not ready for prime time. But she remained beloved by many rank-and-file Republicans and had staunch advocates among the GOP establishment, including leading neoconservative voice William Kristol.

In looking toward Campaign 2012, political commentators counted her among Republican top-tier presidential candidates. (So, too, were Sen. John Ensign of Nevada and South Carolina Gov. Mark Sanford before those moral-values champions admitted to extramarital affairs,)

Now the impetuous Palin has decided not even to complete her first term as governor, quitting with 18 months to go. In her stream-of-consciousness resignation statement that veered from self-righteous to self-pitying Palin seemed to suggest that she was quitting so she could avoid the lame-duck temptation to take junkets.

“I thought about how much fun some governors have as lame ducks, travel around the state, to the Lower 48 (maybe), overseas on international trade as so many politicians do,” Palin said from her home in Wasilla, Alaska. “And then I thought that’s what’s wrong many just accept that lame-duck status, hit the road, draw the paycheck and ‘milk it.’

“I’m not putting Alaska through that I promised efficiencies and effectiveness. That’s not how I am wired. I am not wired to operate under the same old ‘politics as usual.’ I promised that four years ago and I meant it. It’s not what is best for Alaska. I am determined to take the right path for Alaska even though it is unconventional and not so comfortable.”

So instead of completing the job that the people of Alaska hired her to do be their governor Palin announced her decision to quit by the end of July 2009. Amazingly, there was still hope in some Republican circles that Palin would use her free time to mount a campaign for the White House in 2012. (Kristol said Palin may have been “crazy like a fox.”)

And given the GOP’s continued media clout and its sophisticated attack capabilities, it surely is not out of the question that the Republicans might regain the White House in the not-too-distant future with another high-risk candidate, possibly even Palin herself.

While the Republicans send up light-weights like Bush and Palin, the Democrats generally select candidates with strong credentials in governance.

By comparison to Bush in 2000 and 2004 and Palin in 2008, the Democrats correspondingly put up Al Gore, John Kerry and Joe Biden. While those three men surely have their shortcomings, they all are highly qualified and deeply experienced individuals. Even a Democratic newcomer like Barack Obama demonstrated a first-rate intellect and impressive organizational skills as a candidate.

Yet, the idea that the Democrats are the “responsible ones” and the Republicans are the “crazies” is disconcerting for someone like me who grew up in the 1950s and 1960s in a Republican household with Barry Goldwater’s Conscience of a Conservative on my nightstand.

Then, the Republicans were the party of Rotary Club businessmen who met payrolls, balanced budgets, led community charities and while supporting necessary government investments in roads, schools and other public works held a reasonable skepticism about Washington’s ability to solve all the nation’s problems.

Though there were imbalanced and dangerous GOP leaders then, too, like Sen. Joe McCarthy and Vice President Richard Nixon, the most powerful Republicans were generally solid characters like President Dwight Eisenhower and Sen. Everett Dirksen. Only over the past three decades has anti-intellectual anti-empiricism transformed the GOP into a modern-day know-nothing party that disdains facts and reason.

Ronald Reagan, with his loose relationship with reality, was an early version of this new Republican, but George W. Bush and Sarah Palin have taken Reagan’s tendencies to new heights. Over the eight years of his presidency, Bush and his neocon advisers treated information as something to be twisted and falsified, all the better to mislead a gullible public.

For Republicans, dogma regularly overrode reason. The GOP response to the federal debt and the growing gap between America’s rich and the rest of us has been to advocate tax cuts and more tax cuts, to let the wealthy consolidate an equity imbalance not seen since the pre-Depression days of the 1920s.

In the face of the record deficits spurred by Reagan and Bush tax cuts, the party simultaneously embraced the neocon agenda of expanding America’s global empire and settling international problems through the costly option of military force.

Despite the resulting harm to the nation’s economic health and to the stretched-thin U.S. military, the Republicans have refused to rethink either their tax cuts or their overseas military commitments. Instead they have opted for a political strategy of attacking anyone and any proposal that seeks even a mildly different approach.

And the pattern of rejecting science and objective evidence continues. In 2009, during a House debate about cap-and-trade legislation aimed at reducing global warming, GOP members cheered a claim that the science regarding this deepening environmental crisis was “a hoax.”

Perhaps, the Republicans’ greatest success has been in intimidating Democrats, many of whom are scared away from charting a different course out of fear that they will be targeted by the Right’s potent attack machine.

Even in the midst of a budget crisis, worsening unemployment and the harmful disparity between the rich and the rest, mainstream Democrats won’t broach the idea of restoring the top marginal tax rate of 50 percent, which prevailed during most of Reagan’s presidency, compared to the 35 percent now.

The best the Democrats could muster was to sit back and let some of Bush’s tax cuts expire at the end of 2010, letting the top marginal tax rate rise a few percentage points but not nearly enough to address the nation’s looming budget crisis. [That didn’t happen either, as Democrats signed on to a “bipartisan” compromise with the Republicans to extend the Bush tax cuts for two years.]

(During the Eisenhower years, the marginal tax rate the percentage that the richest Americans paid on the top end of their income exceeded 90 percent.)

Sometimes, it seemed Democrats preferred to see Obama’s reform agenda fail and the United States careen toward bankruptcy than face the prospect of more GOP attack ads accusing them of “tax-and-spend.”

Another key factor in this political dysfunction is that journalists in the mainstream media have their own career fears about being accused of “liberal bias” if they challenge right-wing canards or investigate GOP crimes.

With a few exceptions like MSNBC’s experimental evening lineup of liberal hosts the U.S. news media continues to cower before the Right’s demonstrated ability to destroy journalists who get in the way. [For details, see Consortiumnews.com’s “The Bush Rule of Journalism.”]

The American Left has contributed to the crisis by failing to invest much in building media outlets that will stand up to pressures from the Right, even as pro-Republican financiers were pouring billions of dollars into the construction of a vertically integrated right-wing media apparatus ranging from books, magazines and newspapers to talk radio, cable TV and the Internet.

This combination of factors has enabled the Republican Party to guide a large portion of the American population into a never-never-land of made-up facts and raging paranoia. And, as Palin’s bizarre resignation statement made clear, the GOP was excited over possibly handing the reins of national power to someone who was clearly unstable and unfit for high office.

After eight years of George W. Bush and the 2008 nomination of Sarah Palin, the question must be asked whether the Republican Party in its current form has become a clear and present danger to the security of the United States and to the future of the American Republic.

← Why Are McCain Backers So Angry?
Reclaiming the Commons →

4 comments for “Republicans, a Threat to the Republic?”