Exclusive: For the past decade, the people of the small central European nation of Slovakia have suffered under a harsh and corrupt “privatization” scheme devised by the Koch Brothers’ Cato Institute. However, in weekend elections, they defied their oligarchs by voting for a left-of-center “populist” party, reports Mark Ames.

On Saturday, the tiny EU nation Slovakia held parliamentary elections, and the results surprised the “experts”: The center-left party Smer, derisively described as “populist” in the American media, won in a record landslide, the first time a single party will control the majority in parliament in Slovakia’s post-Communist history.

The “populist” Smer won on an unexpectedly large turnout of 60 percent –the so-called experts had been assuring readers there’d be a low turnout of 40 percent. 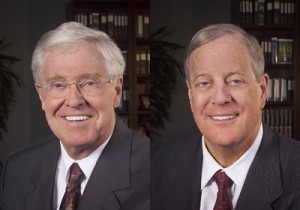 The high turnout reflects real suffering for the people of Slovakia that goes well beyond mere cynicism, they’re suffering from real, mass impoverishment, brought on by a decade of brutal free-market reforms, which hit the privatized pensions especially hard. That’s where we Americans come in, specifically the Cato Institute, but I’ll get to that in a moment.

Although there’s been almost no coverage of Slovakia’s mass protest movement, the country has seen the largest demonstrations since the Velvet Revolution. The protests were sparked in part by the “Gorilla” scandal, leaked recordings of Slovakia’s free-market politicians negotiating their bribes with bankers from a top hedge fund, Penta, in exchange for Penta’s lucrative privatization deals.

But what’s sustained the protests, and what brought people out to vote in droves for the “populists,” is the mass impoverishment that’s worsened life for most of Slovakia’s citizens, and first to suffer have been Slovakia’s pensioners, who are forced to subsist on roughly $400 per month.

Here’s where the Cato Institute, the libertarian think-tank founded by the Koch brothers, comes in, and where Slovakia’s problems become our problems.

In the early 2000’s, the co-chairman of the Cato Institute’s Project on Social Security Privatization, José Piñera, played a key role advising and overseeing Slovakia’s mass pension privatization, which passed in 2003 under the free-market government of Mikulas Dzurinda. Today, Slovakia’s retirees are groaning under the austerity pain administered to them by the Cato Institute.

José Piñera, who has led Cato’s Social Security Privatization Project since the 1990s, has a dark history of administering pain on a nationwide scale: Piñera served in the military junta under Chile’s Generalissimo Augusto Pinochet, first as Pinochet’s Minister for Labor, helping suppress unions in one of the most brutal dictatorships in the world; later, Piñera oversaw Pinochet’s radical privatization of Chile’s pension program.

Today, Chile suffers one of the worst wealth inequality problems in the developed world. And for the past two decades, José Piñera, working at the Cato Institute, has been trying to impose the same pension austerity on Americans.

It’s a match made in Hell: Cato and the Koch brothers have been pushing to dismantle Social Security since the Kochs up the Cato Institute in the late 1970s. Thanks to the Cato Institute’s tireless efforts, today dismantling Social Security is practically gospel in the Republican Party, and not far off the top of the “To Do” list for some “centrist” Democrats either.

Cato’s José Piñera was brought in to oversee Slovakia’s pension privatization only after the 2002 elections put in power the free-market rightwing Democratic and Christian Union Party, led by Prime Minister Mikulas Dzurinda. The pensions were privatized in 2003, along with a free-market program that lowered the top tax rate to a flat 19 percent, eliminated inheritance taxes, and generally shifted the burden down the economic scale.

The reforms were wildly unpopular with Slovaks, to the same degree that they were popular with Western bankers and banking institutions like the World Bank, which named Slovakia the world’s top economic reformer in 2004, and one of the top 20 business-friendly nations in the world.

The timing of the joint Cato-Bush praise for Slovakia’s pension privatization was interesting for a couple of reasons:

First, because the same free-market government that Cato advised and Cato-Bush praised has now been implicated in cutting secret kickback deals with leading hedge fund to sell off Slovakia’s state assets in exchange for millions in bribes; and secondly, that year, 2005, was the year President Bush made his big push to privatize America’s Social Security program, with the Cato Institute as both the lead adviser and promoter.

According to the Washington Post: “Crane said that after Piñera’s presentation, Bush declared, ‘This is the most important policy issue facing the United States today.’”

As soon as Bush was elected President, he set up a commission to privatize Social Security, and staffed it with the Cato Institute’s free-market zealots. Unfortunately for them, the 9/11 attacks distracted the Administration. But in 2005, Bush made Social Security privatization his top priority for his second term, and once again, he put the Cato Institute in charge.

By the end of 2005, however, Bush’s presidency was practically in tatters as the country turned against his wars, and Hurricane Katrina made privatizing Social Security politically impossible. The project to do to America what Cato did to Slovakia was essentially abandoned, and the Cato Institute turned critic of Bush’s war on terror policies.

Thanks to younger brother Sebastian’s free-market privatization of Chile’s education system, the country has erupted in nationwide protests and violence on a level not seen since, well, Generalissimo Pinochet overthrew Chile’s democratically elected government in 1973, and installed a brutal regime that crushed dissent and murdered and tortured thousands, handing the economy over to free-market fanatics including Friedrich von Hayek, Milton Friedman, and Sebastian’s brother, José Piñera.

Neither age, nor time, nor working at the American-based Cato Institute, dining with future presidents and convincing them to gut the population’s Social Security, has mellowed this former Pinochet sidekick’s distaste for democracy. As Piñera wrote in 2003,

“To hand over a blank check to inherently unstable majorities concerning virtually all the major economic, social, and political issues of a society is to institutionalize instability, open the way to more serious abuses, and condemn a country to underdevelopment. How is anyone to make rational decisions about work, savings, and investment if key variables, such as taxes, labor legislation, and regulations, can be altered by 50.01 percent of the citizens through a vote that, in countries with low levels of education, can almost never be said to show the characteristics of an ‘informed vote’?”

On Saturday, the Slovaks voted overwhelmingly to reject the damage and plunder that the Cato Institute’s advisers wreaked on that tiny country’s citizens. Naturally, to free-market zealots like the Piñeras, the Kochs, the Cato Institute and the rest of the oligarchy’s minions, this only proves their point about why democracy must be “limited.”

The hope among the elites in Slovakia and elsewhere was that the voters’ mass impoverishment and anger would lead to a withdrawal from politics, but the high voter turnout turned out to be perhaps the greatest victory for the people of Slovakia. The politicians are to be expected to sell out and disappoint, but the more engaged in their democracy the people are, the more power they’ll have to eventually change their politics for the better, and finally bring an end to the rotten politics of oligarchy and plunder that mark our age.

← Seeking Justice for Wall St.’s Victims
How Dangerous Is Iran? →

9 comments for “Slovakia Defies the Kochs and Cato”