Israeli threats of war on Iran are not aimed at eliminating a nuclear bomb or even the imminent building of one, but rather to destroy Iran’s “capability” to build one in the future because Iranians are deemed irrational. But filmmaker Sean Stone says that’s not the Iran he saw in a recent trip.

According to the doctrine of pre-emptive war, Iran can be attacked based on its alleged desire to develop nuclear weapons, just as Iraq was attacked in 2003. In fact, Congress is currently debating whether a nuclear capability alone (which Brazil, Japan, and other countries enjoy) could justify the ‘preventive’ attack.

I believe it is time to negate this doctrine by postulating that Iran in fact has a right, as a sovereign nation, to a nuclear capability. 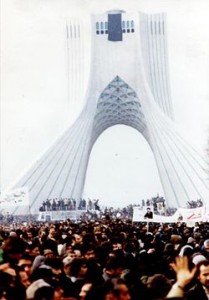 A scene from the Iranian revolution in 1979

Having traveled to Iran recently, I can attest to the Joint Chiefs Chairman General Martin Dempsey’s reference to Iran as a “rational” actor. The Iranians have no interest in destroying America, or Israel, at the expense of one of the oldest continuous civilizations in the world, dating back about 2,600 years.

Iran is currently surrounded by over 40 U.S. military installations, not counting Israel’s still-unaccounted nuclear arsenal. To assert that Iran would jeopardize its culture for a one-shot nuclear attack is a complete miscalculation of the Iranian spirit; that spirit gave rise to a revolution in 1979 against what they perceived as Anglo-American imperialism in the form of the Shah, much as our own revolution opposed British imperialism.

I agree with General Dempsey that an attack on Iran would not only be imprudent, it would be “destabilizing,” and for more than just Iran. What is at stake is much larger than Iran’s right to become a nuclear power; and based on the attitude of the political figures I spoke with in Iran, they understand this very well — should Israel, with or without American support, attack Iran’s nuclear or military infrastructure, it would be considered an act of war that may prompt World War III.

What I believe is currently being played out is an “endgame” scenario, by failing West European and American economies, threatening to explode what has historically been referred to by British imperialists as the Heartland of Eurasia: stretching from the Horn of Africa (guarding the shipping lanes of the Gulf) to Afghanistan and Pakistan (in Russia and China’s underbelly).

The Russians know this “Great Game” well, having played it with the British since at least the Crimean War of the mid-19th Century. So when Russia says it cannot accept the ongoing destruction of the Syrian government, or an attack on Iran, it is based on the understanding that such destabilization of this “Heartland” could ignite war between Shia and Sunni Muslims across the region, even affecting the Muslim populations of southern Russia and western China.

Iran is currently accused by the West of being a rogue state involved in spreading amorphous terrorism abroad. In reality, Iran has seen the destruction of the sovereign states in Afghanistan and Iraq, on its borders; and now, the Obama Administration is calling for the downfall of Iran’s ally, President Assad’s secular Syrian regime.

That country is quickly going the way of Lebanon in the 1980s, which could reignite sectarian violence from Lebanon to Iraq, and beyond. The chaos ensuing the overthrow of Assad will not only serve to radicalize the religious factions, as the Iraq war did after the fall of the secular Ba’ath Party, but such a strategy seems to have been predicted; retired General Wesley Clark reported in his 2003 book that the imperialist ‘neo-con’ faction within the U.S. Defense Department had plans for regime change in Iraq, Syria, Libya, Somalia, Sudan, Lebanon and Iran, dating back to before Sept. 11.

In such a meltdown of nation-states, Israel will not be safe from retaliation by Hezbollah and Hamas; unless of course, Prime Minister Benjamin Netanyahu intends to use such violence to attempt an extension of Israel’s borders toward the Euphrates, according to the right-wing “Greater Israel” doctrine which desires an Israeli state from the Nile in Egypt to the Euphrates in Iraq.

It would then seem the logic of this current escalation to war with Iran really has nothing to do with protecting Israel; the escalation will more likely sacrifice the Israeli people for the sake of a game of empire.

It is no wonder that Russian Prime Minister Vladimir Putin has called the Anglo-American policy in the Middle East a “cult of violence.” As Putin understands, if we do not respect national sovereignty, who are we left to cooperate with in order to stop the radical political groups we allege as our enemy?

In point of little irony, most radical Al-Qaeda elements are derived from Saudi-style Wahhabism, which gave rise to the Taliban regime. Considering that Iranian Shi’ism is long-opposed to this brand of Sunni Islam, would it not make more sense for America to cooperate with Iran against Al-Qaeda and related extremist groups?

In the process of such diplomatic engagement, is it not possible that we make peace with the Iranian regime through a commonality of purpose and an exchanging of ideas?

The Iranian people, like the American people, are reasonable, but proud; if they believe in a right to nuclear capabilities, it is because they feel they have the same national right as do the Israelis or Pakistanis, both of whom have already weaponized the region. And according to their Supreme Leader, Iran is not desirous of nuclear weapons, for he has said that even “the production, possession, use or threat of use of nuclear weapons are illegitimate, futile, harmful, dangerous and prohibited as a great sin.”

If we are thus serious about the Non-Proliferation Treaty which Iran has signed, I’d personally like to see a nuclear weapon-free zone across the Middle East, which would mean accounting for the Israeli arsenal.

But if we continue on the current trajectory of giving “unconditional support” to Israel and its illicit nuclear arsenal — and if we continue to support the overthrow of nations who have not declared war on us — are we not creating the conditions for Iran to eventually desire a nuclear weapon, to prevent the destruction of its national sovereignty?

If we can succeed in staving off an imperialistic war in the coming years, I foresee a future of cooperation between Iran, Israel and America, based on a common republican spirit and tradition.

But if Anglo-American imperialism chooses to continue to smash nations and disregard borders, that imperial spirit will only breed more terrorism, not less. If we create a world without sovereign states with authority of law to rule over their people, who will we have left to deal with?

Countries do not always get along, but failed states never do. And should we risk war over the excuse of Iran’s nuclear program, we will be looking at a region of radicalized groups of all denominations, with very little authority over them, and tremendous resentment at what they will perceive as foreign imperialists. Such a day would be much worse than seeing a nuclear Iran.

Sean Stone is an actor, filmmaker and co-founder of Film Funds. [This article originally appeared at HuffingtonPost and is reprinted with the author’s permission.]

13 comments for “How Dangerous Is Iran?”