Exclusive: The Right’s attack machine, which these days questions President Obama’s birthplace and smears Georgetown student Sandra Fluke over contraceptives, arose in the wake of the Vietnam War and Watergate with young conservatives thinking they were the real victims, thus justifying whatever they did, reports Robert Parry.

Americans sometimes wonder how the nation’s political process got so unspeakably nasty with vitriol pouring forth especially from right-wing voices like Rush Limbaugh, Glenn Beck and Michael Savage, to name just a few. Yet, whenever called on this ugliness, conservatives insist that they are the real victims, picked on by the Left.

This destructive and whiny dynamic has existed at least since the late 1960s when angry passions spilled over from the Vietnam War and grew worse after Richard Nixon exploited Democratic dissension on the war to win the White House in 1968 and then continued the war for another four nasty years. 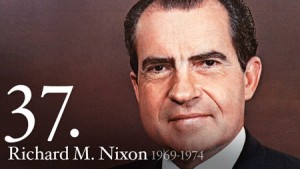 Richard Nixon, the 37th President of the United States

As president, Nixon also responded to the fury splintering American society with wedge issues, appealing to the “silent majority” and denouncing anti-war protesters as “bums.” He rode that divisive formula to a landslide victory in November 1972 but soon ensnared himself in the Watergate political spying scandal that drove him from office in August 1974.

Out of all that anger emerged an American Right that believed, as an article of faith, that the Democrats and the “liberal press” had turned Nixon’s run-of-the-mill indiscretions in Watergate into a constitutional crisis to undo Nixon’s overwhelming electoral mandate of 1972.

So, over the next two decades with Nixon in the background egging on Republican politicians the Right built an attack machine that was designed to defend against “another Watergate” but also was available to destroy the “liberal” enemy.

Which is why, in retrospect, the decision by President Lyndon Johnson and his top aides to withhold from the public their evidence of Nixon’s sabotage of the Vietnam peace talks in fall 1968 proved to be the opposite of their stated intention: to hide the dirty secret for “the good of the country.”

As Johnson’s national security adviser Walt W. Rostow observed in 1973 as the Watergate scandal was unfolding, Nixon may have dared undertake that domestic spying program because he had gotten away with his 1968 skullduggery unscathed.

Because the Republicans had not been held accountable, Rostow noted, “There was nothing in their previous experience with an operation of doubtful propriety (or, even, legality) to warn them off, and there were memories of how close an election could get and the possible utility of pressing to the limit and beyond.” [To read Rostow’s memo, click here, here and here.]

Indeed, if Johnson had revealed Nixon’s peace-talk sabotage in 1968 or if Rostow had released the evidence after Johnson’s death in 1973 the public’s perception of Nixon and Watergate might have been dramatically different. Instead of a one-off affair that could be blamed on some overzealous subordinates, the break-in at the Democratic headquarters might have been seen as part of a larger pattern.

If the American people had seen the evidence that Johnson had regarding Nixon keeping the South Vietnamese government away from the Paris peace talks in 1968 with promises of a better deal if he got elected it would have been difficult for even the most die-hard conservative to believe that Nixon’s resignation was undeserved.

And that might have gone double if Americans had read the internal memos about how Nixon’s Wall Street friends were using their inside knowledge of Nixon blocking the Vietnam peace talks so they could place their bets on stocks and bonds. [See Consortiumnews.com’s “Profiting Off Nixon’s Vietnam ‘Treason.’”]

The image of these Wall Street supermen sitting around a table discussing how to profit off a prolonged war while a half million American soldiers were sitting in a war zone might have been hard for even the most ardent Ayn Rand enthusiast to stomach.

But Johnson chose to stay silent in November 1968 and took the secret to his grave in January 1973. It was then up to Rostow to decide what to do with the file that Johnson had entrusted to him, what Rostow called “The ‘X’ Envelope.” [See Consortiumnews.com’s “LBJ’s ‘X’ File on Nixon’s ‘Treason.’”]

Rostow apparently struggled with the question until June 1973 when he sealed the file with a note to the LBJ Library that the envelope should stay secret for a half century and possibly longer. (It was eventually opened in 1994, beginning a long process of declassifying some of the secret and top secret documents that described what Johnson called Nixon’s “treason.”)

Johnson, Rostow and other senior Democrats who were privy to the secrets apparently thought that in their silence they were doing what was good for the country.

“Some elements of the story are so shocking in their nature that I’m wondering whether it would be good for the country to disclose the story and then possibly have a certain individual [Nixon] elected,” Defense Secretary Clark Clifford told Johnson in a conference call on Nov. 4, 1968. “It could cast his whole administration under such doubt that I think it would be inimical to our country’s interests.”

However, by not trusting the American people with such vital information, these Democrats set the stage for the depressing drama that has played out over the ensuing four-plus decades. With the evidence of Nixon’s “treason” kept under wraps, Republicans could fancy themselves the real victims in the Watergate scandal and thus could justify doing whatever was necessary to protect some future GOP president from similar treatment.

From then on, whenever some major scandal threatened Ronald Reagan or George H.W. Bush or George W. Bush, the right-wing attack machine would fire up and mow down anyone who got too close to the truth.

Some examples include evidence of another October Surprise dirty trick in 1980 (with Reagan’s campaign frustrating President Jimmy Carter’s efforts to free 52 American hostages in Iran), the Iran-Contra sequel (as President Reagan traded more arms to Iran for more U.S. hostages in 1985-86), the Iraq-gate scandal of secretly arming Saddam Hussein (which put President George H.W. Bush on the spot after the Persian Gulf War in 1991), or the Plame-gate affair (which involved George W. Bush’s administration leaking the identity of a covert CIA officer to get back at her husband for exposing a lie behind the Iraq War in 2003). [For more on this history, see Robert Parry’s Secrecy & Privilege or Consortiumnews.com’s “New October Surprise Series.”]

The Right’s attack machine was there, too, to take down Democratic presidents over even minor “scandals.” For instance, in the 1990s, Rush Limbaugh and other right-wing operatives pounded President Bill Clinton over murky questions about an old real-estate deal known as Whitewater.

A dark eminence behind the assault on Clinton was none other than Richard Nixon, who even in his disgraced retirement continued to counsel Republicans on how to play hardball politics. Ironically, Nixon plotted to destroy Clinton even as Clinton was extending a hand of friendship to Nixon.

As Monica Crowley reported in her book, Nixon Off the Record, Clinton called Nixon seeking advice on everything from foreign policy to time scheduling. The first contact — a 40-minute conversation — was made on March 2, 1993, barely a month after Clinton entered the White House “and their unexpectedly close relationship was born,” wrote Crowley, a personal aide to Nixon who recorded many of the ex-president’s commentaries in his final years.

After the first call, Nixon sounded genuinely touched that Clinton had reached out. “He was very respectful but with no sickening bullshit,” Nixon told Crowley. “It was the best conversation with a president I’ve had since I was president.”

Six days later, Nixon traveled to Washington for an announced public meeting with Clinton in the White House, an honor that Nixon had not received from Clinton’s Republican predecessors who had snuck Nixon in the back door for unannounced private meetings. Again, Nixon seemed sincerely moved by Clinton’s gesture.

“Clinton is very earthy,” Nixon told Crowley. “He cursed — ‘asshole,’ ‘son of a bitch,’ ‘bastard’ — you know. He’s a very straightforward conversationalist.” Nixon also acknowledged, in an edgy tone, that the formal White House meeting with Clinton “was more than either Reagan or Bush ever gave me.”

But typical of Nixon, he was soon scheming to undo the Democratic president who had reached out to him. Nixon exploited his personal knowledge of Clinton to offer back-channel political advice to Sen. Bob Dole, whom Nixon correctly considered to be the likely Republican nominee in 1996.

Nixon also privately hoped that the Clintons’ troubled Whitewater investment would turn into a second Watergate that would humiliate both Clinton and his wife — and somehow settle an old score Nixon felt toward Democrats and anti-war demonstrators.

In one such comment on April 13, 1994, four days before the stroke that led to his death, Nixon called Crowley and chortled about the surging Whitewater scandal. “Clinton should pay the price,” Nixon declared. “Our people shouldn’t let this issue go down. They mustn’t let it sink.”

Nixon said he had even called Dole to make sure that aggressive questioners were put on the Whitewater committee.

Later that month, at Nixon’s funeral, Clinton paid tribute to the Republican president. “May the day of judging President Nixon on anything less than his entire life and career come to a close,” Clinton wished, apparently not knowing what that full-scale assessment would reveal.

In the succeeding months, the Republican strategy of pummeling Clinton over Whitewater and other personal indiscretions dominated the headlines. Clinton was driven deep into debt over lawyer fees and was left little choice but to seek hundreds of thousands of dollars in contributions to save his political life. Not surprisingly, that fundraising merged into the larger flow of “Clinton scandals.”

The endless string of “Clinton scandals” helped Republicans win control of Congress in 1994, with Limbaugh made an honorary member of the House GOP majority as thanks for his relentless assaults, three hours a day, against Bill and Hillary Clinton.

Eventually, after the Whitewater probe expanded to include disclosures about Clinton’s sexual indiscretions with former White House intern Monica Lewinsky, House Republicans voted to impeach Clinton during a lame-duck session in 1998, representing payback for the Democrats pressuring Nixon to resign 24 years earlier.

After a humiliating trial in the U.S. Senate, Clinton survived to finish his term. But the right-wing attack machine that arose to prevent “another Watergate” and came of age by exploiting the “Whitewater scandal” was now a permanent part of the American political landscape.

17 comments for “How the Right’s Smear Machine Started”