Exclusive: The notion of Wall Street bankers meeting in private to discuss profiting off a plot to extend the Vietnam War and risk the lives of thousands of American soldiers may sound like a conspiracy movie script, but it is a tragic reality reflected in once secret White House documents, reports Robert Parry.

As I pored over documents from what the archivists at Lyndon Johnson’s presidential library call their “X-File” chronicling Richard Nixon’s apparent sabotage of Vietnam peace talks in 1968 I was surprised by one fact in particular, how Johnson’s White House got wind of what Johnson later labeled Nixon’s “treason.”

According to the records, Eugene Rostow, Johnson’s Under Secretary of State for Political Affairs, got a tip in late October 1968 from a Wall Street source who said that one of Nixon’s closest financial backers was describing Nixon’s plan to “block” a peace settlement of the Vietnam War. The backer was sharing this information with his banking colleagues to help them place their bets on stocks and bonds. 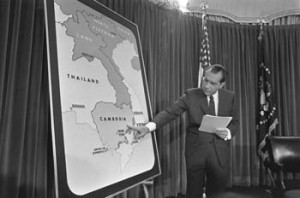 President Richard Nixon addresses the nation about his bombing of Cambodia, April 30, 1969

In other words, these investment bankers were colluding over how to make money with their inside knowledge of Nixon’s scheme to extend the Vietnam War. Such an image of these “masters of the universe” sitting around a table plotting financial strategies while a half million American soldiers were sitting in a war zone is a picture that even the harshest critics of Wall Street might find hard to envision.

Yet, that tip  about Nixon’s Wall Street friends discussing his apparent tip on the likely course of the Vietnam War was the first clear indication that Johnson’s White House had that the sudden resistance from South Vietnamese President Nguyen van Thieu to Paris peace talks may have involved a collaboration with Nixon, the Republican candidate for president who feared progress toward peace could cost him the election.

On Oct. 29, Eugene Rostow passed on the information to his brother, Walt W. Rostow, Johnson’s national security adviser. Eugene Rostow also wrote a memo about the tip, reporting that he had learned the news from a source in New York who had gotten it from “a member of the banking community” who was “very close to Nixon.”

Eugene Rostow’s source said the conversation occurred among a group of Wall Street bankers who attended a working lunch to assess likely market trends and to decide where to invest. Nixon’s associate, who is never identified in the White House documents, told his fellow bankers that Nixon was obstructing the peace talks.

“The conversation was in the context of a professional discussion about the future of the financial markets in the near term,” Eugene Rostow wrote. “The speaker said he thought the prospects for a bombing halt or a cease-fire were dim, because Nixon was playing the problem as he did the Fortas affair to block.

“They would incite Saigon to be difficult, and Hanoi to wait. Part of his strategy was an expectation that an offensive would break out soon, that we would have to spend a great deal more (and incur more casualties) a fact which would adversely affect the stock market and the bond market. NVN [North Vietnamese] offensive action was a definite element in their thinking about the future.”

(The reference to Fortas apparently was to the successful Republican-led filibuster in the Senate to block Johnson’s 1968 nomination of Associate Justice Abe Fortas to replace Earl Warren as Chief Justice on the U.S. Supreme Court.)

In other words, Nixon’s friends on Wall Street were placing their financial bets based on the inside dope that Johnson’s peace initiative was doomed to fail. (In another document, Walt Rostow identified his brother’s source, who disclosed this strategy session, as Alexander Sachs, who was then on the board of Lehman Brothers.)

A separate memo from Eugene Rostow said the unidentified speaker at the lunch had added that Nixon “was trying to frustrate the President, by inciting Saigon to step up its demands, and by letting Hanoi know that when he [Nixon] took office ‘he could accept anything and blame it on his predecessor.’”

So, according to the speaker, Nixon was trying to convince both the South and North Vietnamese that they would get a better deal if they stalled Johnson’s peace initiative.

In a later memo providing a chronology of the affair, Walt Rostow said he got the news about the Wall Street lunch from his brother shortly before attending a morning meeting at which President Johnson was informed by U.S. Ambassador to South Vietnam Ellsworth Bunker about “Thieu’s sudden intransigence.”

Walt Rostow said “the diplomatic information previously received plus the information from New York took on new and serious significance,” leading to an FBI investigation ordered by Johnson that uncovered the framework of Nixon’s blocking operation. [To read that Rostow memo, click here, here and here.]

The Rostow memos are contained in a file with scores of secret and top secret documents tracing Nixon’s Vietnam peace-talk gambit as Johnson tried frantically to stop Nixon’s blocking operation and still reach a peace agreement in the waning days of his presidency.

After Nixon narrowly prevailed in the 1968 election and as Johnson was leaving the White House without a peace agreement in hand, the outgoing President instructed Walt Rostow to take the file with him. Rostow kept the documents in what he called “The ‘X’ Envelope,” although the archivists at the LBJ Library in Austin, Texas, have dubbed it the “X-File” after the once popular TV series.

Rostow’s “’X’ Envelope” was not opened until 1994, which began a process of declassifying the contents, some of which remain secret to this day.

After Johnson’s peace initiative failed, the Vietnam War dragged on another four years, leading to the deaths of an additional 20,763 U.S. soldiers, with 111,230 wounded. An estimated one million more Vietnamese also died.

[For a much more detailed examination of what Johnson called this “sordid story,” see Consortiumnews.com’s “LBJ’s ‘X’ File on Nixon’s ‘Treason.’”]