Ohio’s Republican-controlled government gerrymandered a new congressional district across a northern strip of the state to pit two progressive Democrats Dennis Kucinich and Marcy Kaptur against each other in Tuesday’s primary. Steve Cobble laments this and recalls some of Kucinich’s brave stands.

When Congressman Dennis Kucinich sat down in Los Angeles one night just over 10 years ago to write the prophetic speech that became known as “A Prayer for America,” the invasion of Iraq was still just an evil gleam in the eyes of George W. Bush, Dick Cheney and Tony Blair. Yet Kucinich had the political courage to stand up by himself, and declare his opposition to the neocon plans: 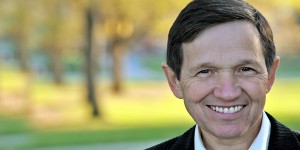 On Feb. 15, 2003, the day the world stood up in opposition to war with Iraq, Kucinich rallied with half a million activists in New York City. On Oct. 24, 2001, Kucinich was one of the few who voted against the Patriot Act. Kucinich co-authored, with Rep. John Conyers, the single-payer health-care-for-all bill. Four years ago, Kucinich offered 35 articles of impeachment regarding the Bush/Cheney administration’s crimes against the Constitution.

When the time came to officially certify the 2004 Bush versus Kerry presidential votes in Ohio, Kucinich was one of the handful of progressive House members who joined Sen. Barbara Boxer, D-California, to oppose that certification and force a public debate about the electoral irregularities.

Kucinich also is one of the very few members of Congress who has voted to end the occupations of Iraq and Afghanistan by cutting off the funding for those wars, the same way the Congress acted to end the Vietnam War in the 1970s.

Dennis Kucinich supports full equality for gays and lesbians. He opposes the Keystone Pipeline project to exploit Canada’s Tar Sands, opposes increasing the retirement age for working people, and fiercely opposes cuts in Social Security and Medicare. He supports the Dream Act (to grant permanent residency to some young non-citizens who were brought to the United States as children), favors significant cuts in the military budget, and has long supported fair trade.

So take a second and think — wouldn’t you have missed Dennis Kucinich if he had not been there standing up for these progressive values? And won’t you miss him if he’s not there to carry on the fight next year?

Kucinich is now caught up in a tough primary battle with Rep. Marcy Kaptur because the two Democrats have been pitted against each other by the creation of a gerrymandered district in northern Ohio. The primary vote is on Tuesday.

(If you wish to thank Kucinich for his often lonely work on behalf of progressive causes and peace, his Web site is www.kucinich.us.)

Steve Cobble worked on the presidential campaigns of Jesse Jackson and Dennis Kucinich, helped found AfterDowningStreet.org and Progressive Democrats of America, and currently works on the fight to roll back the Citizens United Supreme Court ruling.

← Profiting Off Nixon’s Vietnam ‘Treason’
Can Rush Keep It Up? →