The celebration and display of political muscle known as the AIPAC policy conference this year rode a crescendo of alarm and bellicosity about Iran’s nuclear program. The connection between the lobbying power assembled in the convention hall and the wave of saber-rattling rhetoric about Iran was strong and profound.

The AIPAC meeting merely underscored what has been obvious for some time: that the primary reason the Iranian nuclear program has become such a high-profile issue in the United States is that the government of Israel has chosen to make it so. 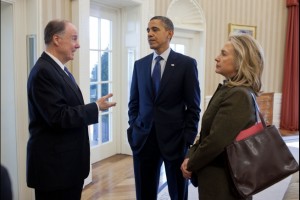 In the absence of the Israeli agitation, the nuclear activities of Iran, which does not have a nuclear weapon and probably has not to date made a decision to make one, would percolate along with many other national-security matters worth watching and addressing but not worth beating a war drum about.

Certainly it would not rate more alarm than, say, the nuclear weapons owned by the desperadoes in Pyongyang known as the government of North Korea. If the saber rattling and even more destructive actions such as terrorist attacks were not interfering with the handling of relations with Iran, the next step in that relationship would be acceptance of Tehran’s offer of negotiations and concentration on the kind of long, deep and broad diplomacy with Iran that has never been tried.

Nothing that Iran has been doing lately accounts for the Iranian nuclear issue having reached what appears to be almost a crisis point. In the long history of Iran’s program, which has been the subject of repeated overestimates of progress, what is happening this year is not fundamentally different from what was happening in many previous years.

Israeli Defense Minister Ehud Barak talks about a “zone of immunity,” but the zones of immunity or vulnerability that matter most to the Israeli government have to do with the U.S. electoral calendar.

The greatest danger the United States (and any peace-loving person in the Middle East) currently faces is that Barak and Prime Minister Netanyahu will spring an October surprise (or a surprise in any month between now and the first Tuesday of November) in the form of an armed attack on Iran. [For more on a historical precedent, see Consortiumnews.com’s “The CIA/Likud Sinking of Jimmy Carter.”]

A key consideration for them is the possibly different reactions of a U.S. president facing a fight for reelection (while also facing that political muscle represented at the convention center) and a newly reelected president who knows he never would be running for anything again.

Because Netanyahu and his government probably prefer that President Obama not be reelected, any of the aftereffects of their surprise, such as a big spike in gasoline prices and maybe even a slide of the U.S. economy back into recession, that would hurt Mr. Obama’s reelection chances would be a bonus for them. The welfare of American consumers and workers is not high on their list of decision-making criteria.

What is billed as an Iran problem is thus mainly an Israel problem. If the United States were to be sucked, or pushed, into a new war in the Middle East, the Israel dimension would be significantly greater than it was even with the Iraq War, despite the many disturbing similarities between the run-up to that conflict and the current situation regarding Iran.

Shared perspectives of the Israeli Right and some American neocons did figure into promotion of the war against Iraq, but Israel was only a contributing factor to a desire for a war that was based on an ideology that had a life of its own. If there is a war with Iran, Israel will be not just a contributing factor but instead the prime mover.

President Obama’s attempt to handle this problem was reflected in his speech on Sunday to the AIPAC conference. He and his speechwriters pushed back as much as it was politically safe to do. In addition to recounting the ample evidence that “when the chips are down, I have Israel’s back” and recalling how his administration has mustered far more international pressure on Iran than his predecessor did, Mr. Obama spoke favorably and optimistically about diplomacy, rightly observed that there is “too much loose talk of war,” and talked about nuclear weapons as distinct from mere nuclear-weapons capability.

But staying with what is politically safe still leaves an unsquared circle. The president said more than enough about the unacceptability of an Iranian nuclear weapon to set the stage for Netanyahu to demand later that the United States do whatever it takes to prevent such a weapon.

In the nearer term, the president’s comments about how “no Israeli government can tolerate a nuclear weapon in the hands of” Iran and reference to “Israel’s sovereign right to make its own decisions about what is required to meet its security needs” sound almost like an invitation to Netanyahu to launch a war.

An episode of the past that comes to mind is how Germany in 1914 allowed itself to be sucked into a large war through unflinching support for its Austrian ally, which was determined to start what it thought would be a small war to show who was boss in the Balkans. Before I get in trouble with the analogy police: no, I am not predicting another World War I.

And yes, there are innumerable differences between the European crisis of 1914 and what we face now. One of those differences is that Germany’s leaders regarded support for Austria-Hungary as strategically essential because without that ally Germany would have been surrounded by adversaries and almost bereft of friends.

By contrast, the automatic U.S. backing of Israeli behavior is rooted in emotions, tribal sentiments and domestic politics, not strategic considerations, which if heeded would imply a much different U.S. policy. But the analogy does provide something to think about regarding how unquestioning backing of a truculent lesser ally can lead to highly damaging consequences for a greater one.

Anyone who considers himself or herself a patriotic American as well as a friend of Israel should think about some other things as well when considering Netanyahu address to the AIPAC conference on Monday. Despite the smoothness with which he operates in U.S. political circles, he does not have U.S. interests at heart.

That observation by itself is unremarkable; we should not expect any leader of a foreign government to have U.S. interests at heart. But of course the U.S.-Israeli relationship has been not just another bilateral relationship.

Despite the enormous, exceptional and automatic support that the United States bestows on Israel, Netanyahu has not hesitated to slam the door in the face of Israel’s patron and protector. He has done it repeatedly regarding the Israeli-Palestinian conflict, most notably concerning the continued Israeli colonization of captured and disputed land, and now he is doing it again regarding Iran.

Notwithstanding the huge effort the Obama administration has put into constructing an unprecedented international-sanctions regime that supposedly is intended to get Tehran to change its nuclear policies, Netanyahu’s government has been undermining any chance of negotiations that would be the forum for registering and confirming such a change.

It has done so by stoking hostility and distrust through terrorist attacks inside Iran and by insisting on conditions (involving an end to uranium enrichment) that clearly are nonstarters for Iran. In remarks in Ottawa before coming to Washington, Netanyahu flatly denounced any negotiations with Iran as unwise.

Netanyahu and his government do not represent the views of Israelis in general. At least some of the objectives that drive that government’s posture toward Iran, including maintaining Israel’s regional nuclear-weapons monopoly and diverting attention from the situation on the West Bank, do not represent U.S. interests either.

Then there is the emotional side of the Israeli attitude toward this issue, which does extend beyond the Israeli government to much of the population. Given history and the awful anti-Israeli rhetoric of Iranian leaders and especially Iran’s president, this side is understandable.

Netanyahu clearly feels this side, in ways that, as Jeffrey Goldberg has described, involve a legacy from Netanyahu’s father. At a personal level, this is all not only understandable but maybe even laudatory. President Obama seemed to be saying so when he noted in his AIPAC speech “the profound historical obligation that weighs on the shoulders of” Netanyahu, Barak and other Israeli leaders.

24 comments for “An Israeli October Surprise on Obama?”