Amid the pounding of war drums on Capitol Hill, on newspaper op-ed pages and on the Republican campaign trail President Obama has insisted on giving peace one more chance regarding Iran’s nuclear program, but he has conceded key ground on the possibility of another preemptive war, Winslow Myers notes.

When President Barack Obama spoke to the powerful American Israel Public Affairs Committee (AIPAC) lobbying organization, he provided the required red meat, America’s support for Israel remains drum tight and war on Iran to prevent their acquisition of nuclear weapons continues to be a viable option.

Obama’s pandering (mitigated, in fairness, by his continued commitment to diplomacy) ignored Israel’s own nuclear weapons, and its government’s obdurate support for the settlements that keep eroding Palestinian territory. 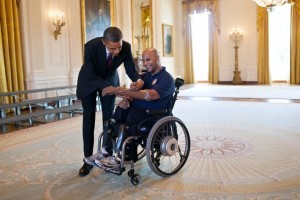 President Obama signs the prosthetic arm of Marine Sgt. Carlos Evans during a tour of the White House for wounded veterans on March 6. (White House photo by Pete Souza)

No doubt it seemed inappropriate to examine the ongoing suffering of the Palestinians with that particular audience, or even the potential suffering of people in Iran and Israel should the dogs of war let loose.  He chose instead to use “us against them” language to strengthen his chances for election.

Incumbents and candidates must do this in our polarized culture. Not only Jewish-American and Israeli conservatives but also Mitt Romney and friends will hold Obama’s feet to the fire.

Political leaders, democratic or autocratic, find it nearly impossible not to fall into the simplistic rhetoric of threat. It’s as old as the nation-state. What’s new is the destructive power of the weapons with which governments can back up their bluster. It raises the stakes in the war of words.

The vicious circle of threat rhetoric becomes self-sustaining, fueled by the magnitude of the weapons and the fears they engender. Leaders of smaller countries take note of what happened to Libya’s Muammar Gaddafi when he voluntarily renounced his weapons program.

Proliferation continues, leading only in one possible direction, over the waterfall. As Einstein asserted, we cannot solve a problem on the same level from which the problem arose. There is no fighting fire with fire in this case. Militant rhetoric is an escalation toward confrontations that will always have the Cuban Missile Crisis as their archetype.

In this cycle of escalation we deny aspects of ourselves that we find it difficult to accept, greed, aggression, secret manipulation, and project those denied attributes onto “them,” the “other.”  We assume that “our” nuclear weapons are purely defensive, a deterrence against malign intent. “Their” nuclear weapons (or possible nuclear weapons program in the case of Iran) are the very shape of evil.

Even domestically we define ourselves more in terms of whom we are against than what we have in common with those we think of as outside our circle of belonging. This process has hollowed out the vital center in our politics, which Sen. Olympia Snowe, R-Maine, has protested by forgoing re-election. It fuels as well the unwarranted influence of media buffoons like Rush Limbaugh, some of whose advertising underwriters have finally begun to leave him as they ought to have long ago.

Failure to understand projection and enemy-imaging internationally could be fatal. Of course we should continue to call Iran’s leaders on their anti-Semitism. It might also help to acknowledge our own role in creating the unconstructive dynamic between Iran and the U.S., going back to our covert 1953 interference in their elections.

Our stereotype of Iran as part of the “axis of evil” imploded in 2009 with the images of brave Iranian citizens risking their lives to demonstrate for more self-determination. Surely the aspirations of the Iranian people, 80 million of them, neither to be bombed nor ruled unjustly have not changed.

The only change was our temporary realization that they were not enemies worthy of annihilation, but lovers of democracy like ourselves. Now in 2012 they are becoming demons again. Can we not see the arbitrary quality of this dynamic?

We need to base our dialogue with adversaries on the choice between mutual suicide and mutual survival, encouraging our leaders to use language that transforms vicious circles of alienation and threat into virtuous circles of cooperation and prevention.

Robert Frost once wrote: “Nature within her inmost self divides/To trouble men with having to take sides.” True as far as it goes, but now the fission-power of the stars, which our scientists unlocked in the New Mexican desert in 1945 and unleashed on Hiroshima, challenges our inmost selves to move beyond taking sides and end our dangerous rhetorical games of nuclear chicken.

Winslow Myers, the author of Living Beyond War: A Citizen’s Guide, serves on the Board of Beyond War (www.beyondwar.org), a non-profit educational foundation whose mission is to explore, model and promote the means for humanity to live without war.

← Mother of the Sit-Down Strike
An Israeli October Surprise on Obama? →