Exclusive: Now topping many Republican presidential polls, ex-Sen. Rick Santorum is taking aim at what he calls President Obama’s “false theology” not “based on the Bible” which supposedly elevates the environment of the Earth above man’s needs, a charge that Sam Parry disputes.

On “Face the Nation” last Sunday, Republican presidential candidate Rick Santorum accused President Barack Obama of embracing a “phony ideal” of environmental theology that puts protection of the Earth above man’s desire to extract its resources, while grabbing more power for the government.

“When you have a worldview that elevates the Earth above man and says we can’t take those resources because we’re going to harm the Earth  it’s just all an attempt to centralize power, to give more power to the government,” the former Pennsylvania senator said. 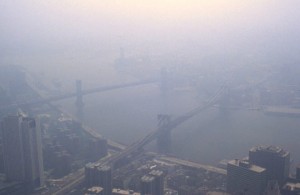 Smog over New York City in the late 1980s

There are so many things wrong with this statement, it’s hard to know where to begin.

First of all, I happen to know a lot of environmentalists, having worked in the environmental movement for nearly 15 years. I’ve not only worked with “professional” environmentalists inside the Beltway, but I’ve traveled around the country meeting with thousands of local environmental activists from Miami to Seattle and many cities and towns in between.

I have never met anyone who considered their environmental advocacy a form of religion. Sure, many environmentalists take protecting the planet very seriously and have changed many aspects of their lives to reduce their own personal impact on the Earth’s livability. And many environmentalists enjoy spiritual moments when they are outdoors exploring nature’s beauty.

But who among us isn’t awed and humbled by the breath-taking beauty of the Grand Canyon or Yosemite? Who among us isn’t refreshed by a hike in the woods on a warm fall day or a day of kayaking in a coastal marsh or wetland? Who among us hasn’t been calmed by a quiet summer sunset or a clear, moonless night away from city lights with a million stars in the sky?

Caring for nature is not some bizarre “phony ideal” or religion. And most environmental activists I’ve met are very normal people with kids and jobs and bills and mortgages. Many environmentalists come to the movement out of a deep traditionally religious faith and want to do their part to preserve “the miracle of God’s work.”

The modern environmental movement is not an effort to “elevate the earth above man.” It’s simply an effort to ensure that we all have a safe, clean environment for our kids and our communities; to protect our natural resources so that humans can continue to survive off the earth’s bounty; and to ensure that future generations can enjoy serene moments of quiet communion with the great outdoors.

The American Right has long tried to portray environmentalists as weird hippy counter-culture extremists. But, from the beginning of American environmentalism in the late 1800s, it has traditionally been a movement that strives to achieve balance with market industrial forces that, unrestrained, level forests, pollute the air and deplete natural resources faster than they can be naturally replenished.

President Abraham Lincoln is credited with laying the foundation for our National Parks system when, partly in response to the development accompanying Americans spreading west, he signed legislation giving Yosemite Valley to California under the condition that it be preserved for recreation and public use.

President Teddy Roosevelt created the National Forest Service, signed the Antiquities Act into law, and protected 230 million acres of public lands at a time when the American frontier had recently been declared closed.

The 1970 Clean Air Act was passed and signed into law by President Richard Nixon when many American cities were enveloped in smog. (Some still are.) President Nixon also signed into law major revisions to the Federal Water Pollution Control Act of 1948 which formed the foundation for the Clean Water Act shortly after Cleveland’s Cuyahoga River caught on fire in 1969.

Even President Ronald Reagan whose environmental legacy is widely criticized by activists designated more than 10 million acres of wilderness areas, signed the Safe Drinking Water Act of 1986, and supported a strong Montreal Protocol treaty to begin phasing out the use of ozone-depleting chemicals.

I don’t remember anyone accusing these Republican presidents of believing in some “phony ideal” of environmental theology. The other big fallacy in Santorum’s rant which echoes almost daily throughout the right-wing media and blogosphere is that environmentalists somehow believe in stronger clean air standards or support global warming action in order to “centralize power” or to “give more power to government.”

Again, having been in the environmental movement for most of my adult life, I have never been in any meeting with any colleague or grassroots activist where anything like this has ever been discussed or even contemplated. This is just not what environmentalists think about.

The truth is that most national environmental organizations spend a lot of time working directly with companies from Wal-Mart to McDonald’s, from timber companies to utilities to collaborate on win-win solutions that protect the environment and the bottom-line of the companies.

And, right-wing sound bites aside, most environmentalists understand that strong environmental standards are very difficult to win without at least some support and input from regulated industries. The art of crafting any legislation environmental or otherwise is a balancing act between all the stakeholders. This is politics 101.

Recently, for example, the major automakers helped craft and endorsed the Obama administration’s tough new fuel economy standard that will require passenger cars and trucks to average 54.5 miles per gallon by 2025.

The rhetoric also ignores the reality that smart regulation actually leads to innovation and improved business efficiencies. The Clean Air Act, for instance, is credited with helping launch a $300 billion environmental technologies industry in the U.S. that employs 1.7 million people.

Finally, the right-wing attack against the Obama administration’s pursuit of stronger environmental standards misses the larger point that none of these standards are happening in a vacuum.

For instance, the 1990 Clean Air Act specifically called on the EPA to reduce mercury and hazardous air toxic emissions. Twenty-one years later, after much delay and many legal battles over rule-making, the EPA finally pressed forward and finalized tough new standards that were published in the Federal Register last week.

But, to listen to many right-wing politicians and talking heads, you would think that the EPA sprung this on industry without any warning or authority. The truth is utilities knew these rules were coming and the Obama EPA was legally required to move forward on this rule.

Politicians aren’t often very good at telling the truth especially when they can score cheap political points by kicking “wacky” environmentalists around. But these right-wing attack lines, parroted by the latest GOP presidential frontrunner, also serve to divide the country on an issue that not too long ago was part of a proud Republican legacy on environmental stewardship and conservation.